Before his right calf injury on Wednesday, Kevin Durant wasn't just leading the Golden State Warriors in scoring, he was the leading scorer in the entire NBA playoffs. As the Warriors face the Houston Rockets on the road in Game 6 (Friday, 9 p.m. ET on ESPN) without KD, how they replace his incredible 34.2 points per game this postseason is the biggest immediate question.

Can Golden State find new, reliable ways to score? In a series in which all five games have been decided by six or fewer points, the answer to that question may determine who makes it to the Western Conference finals. Points are the ultimate currency in these games, and Durant has scored a whopping 29 percent of the Warriors' points this postseason.

His shot chart leaves little doubt that he's one of the best scorers in the world, but he's also by far the Warriors' most proficient 2-point threat. Durant has made 90 2-pointers in the playoffs; Stephen Curry and Klay Thompson have combined to make 91. 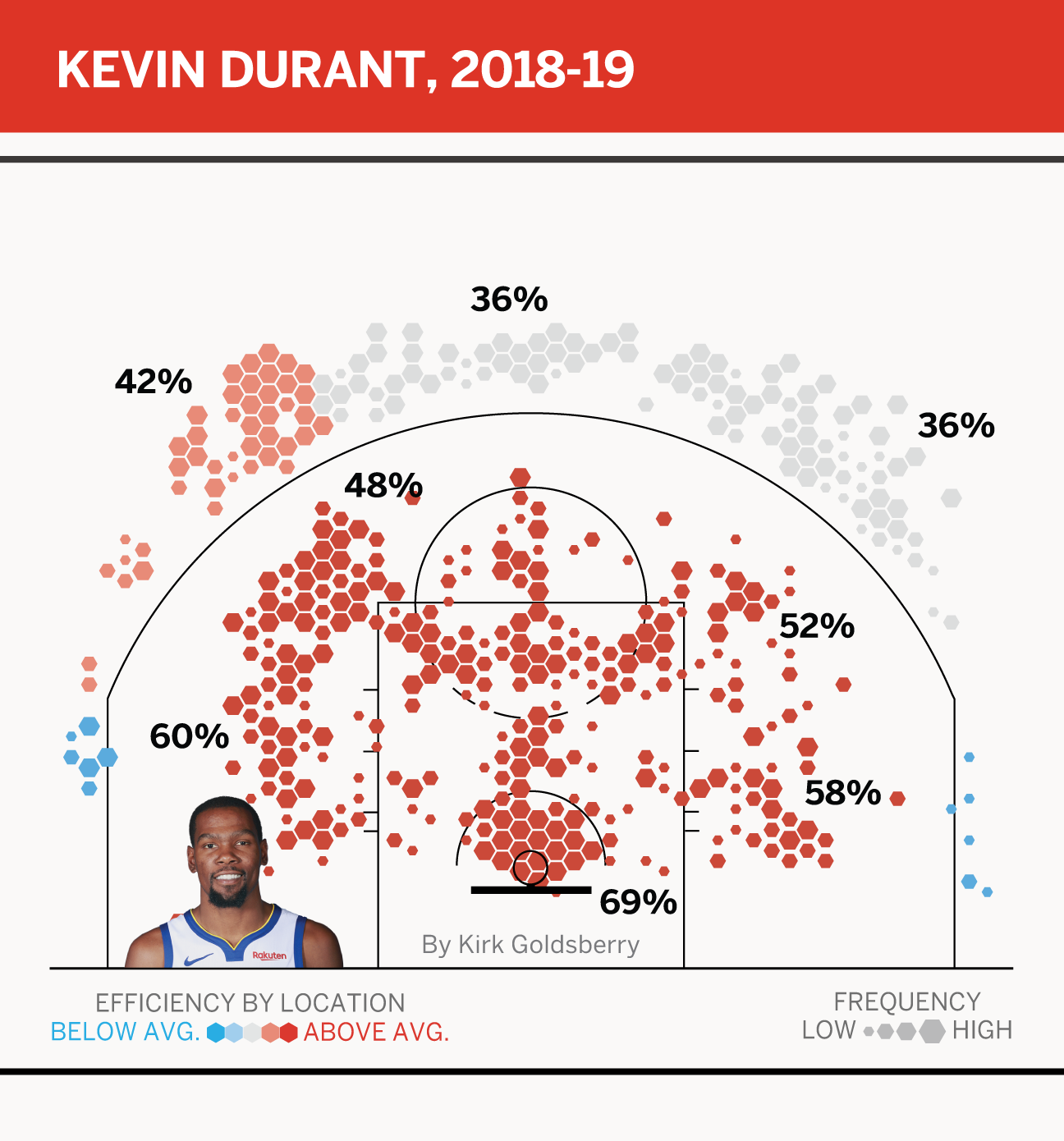 Still, if there's one team that can absorb his loss, it's the superteam from Oakland. Any conversation about replacing KD has to hit on three key elements: scoring, depth and defense.

All eyes will be on Curry -- the two-time MVP and greatest shooter known to man -- to ignite the offense. His usage rate this postseason is 25.2 percent, lower than that of Pascal Siakam. Curry is averaging 23.5 PPG. He has to take charge, and both his usage and his scoring have to surge.

That won't be easy. Curry has never averaged more than 28.3 PPG in the playoffs, so it's unreasonable to expect him to replace more than a fraction of Durant's scoring load, particularly in a world where Houston can now assign a lot more defensive attention to slowing down his splashy ways.

From Houston's perspective, Durant's absence frees up the defensive resources of PJ Tucker. Per Second Spectrum tracking, Tucker has matched up against Durant more than twice as often as any other Houston defender in this series. With Durant sidelined, Tucker will likely spend more time hounding Curry and Draymond Green.

Tucker has a way of reducing the effectiveness of both of those dudes. Each of the two Warriors has exhibited downticks in usage, shooting efficiency and scoring when being defended by him over the past two seasons.

Curry and Green vs. PJ Tucker

Replacing KD's 34 points per contest is a massive task, and it's going to be a team effort. Curry and Thompson must be on the front lines of that push. They both scored 25 or more points apiece for the first time this postseason in Game 5, which is encouraging. It's also a good barometer to watch: The Dubs have gone 9-3 during their playoff appearances when both Splash Brothers drop at least 25.

But it's not just about the scoring.

No Warrior has played more minutes this postseason than Durant, and given the fact that this team was already dangerously thin following the DeMarcus Cousins injury, depth is a major concern here. Head coach Steve Kerr has a total of 240 minutes to distribute among his team in Game 6. Thus far, Durant has chewed up 16 percent of that time. Where will those minutes go?

In the Houston series, Kerr has largely relied on an eight-man rotation that includes the Hamptons 5, Shaun Livingston, Kevon Looney and Alfonzo McKinnie. But after KD went down in Game 5, Jonas Jerebko cracked the rotation, and Looney played nine of the game's final 14 minutes. These fellas are fine players. But not only do they represent a huge step down on the offensive end, they're a downgrade on defense as well.

The most underrated component of Durant's game is his ability to deter buckets. He has turned into an awesome defensive piece for Golden State. The same combination of smarts, skills and length that makes him a terrifying scorer also makes him versatile and effective on defense.

Per Second Spectrum tracking, he spent more than 75 percent of his time defending Tucker, Eric Gordon, James Harden and Chris Paul in this series. Those just happen to be Houston's top four scorers against the Warriors. The loss of Durant the defender means the Rockets can hunt for better matchups for their top scorers.

Durant's replacements have to step up on defense as well as offense, and dudes like Jerebko and Looney don't scare anyone on that end.

Although Andre Iguodala does the lion's share of the work defending Harden, Durant has arguably done the best work while matching up with Harden over 10 times per game this series.

GSW defenders vs. Harden (this series)

Durant is one of the best two-way players in the world right now, which means his effectiveness is virtually impossible to completely replace. But if anyone can do it, it's the defending champs.

They have found ways to win through injuries in the past. One of the perks of being a superteam is that the proverbial next men up are named Curry and Thompson.