As the Golden State Warriors and Portland Trail Blazers get set to square off in the Western Conference finals (Tuesday, 9 p.m. ET on ESPN), the importance of those makes and misses is only going to be heightened.

How will the Warriors look to score in games before Kevin Durant returns from his calf injury? And what are the keys to Portland's attack? Let's look at the most important shots for the three most important players on each squad, starting with the two star backcourts.

Stephen Curry is the best shooter on the planet, but even the greatest shooters are more dangerous in some spots than others. Steph thrives from the left side of the arc. Not only is he most active over there, he's most efficient, too.

It's never a good idea to give him a good look, but it's especially unwise to let him get hot in that spot: 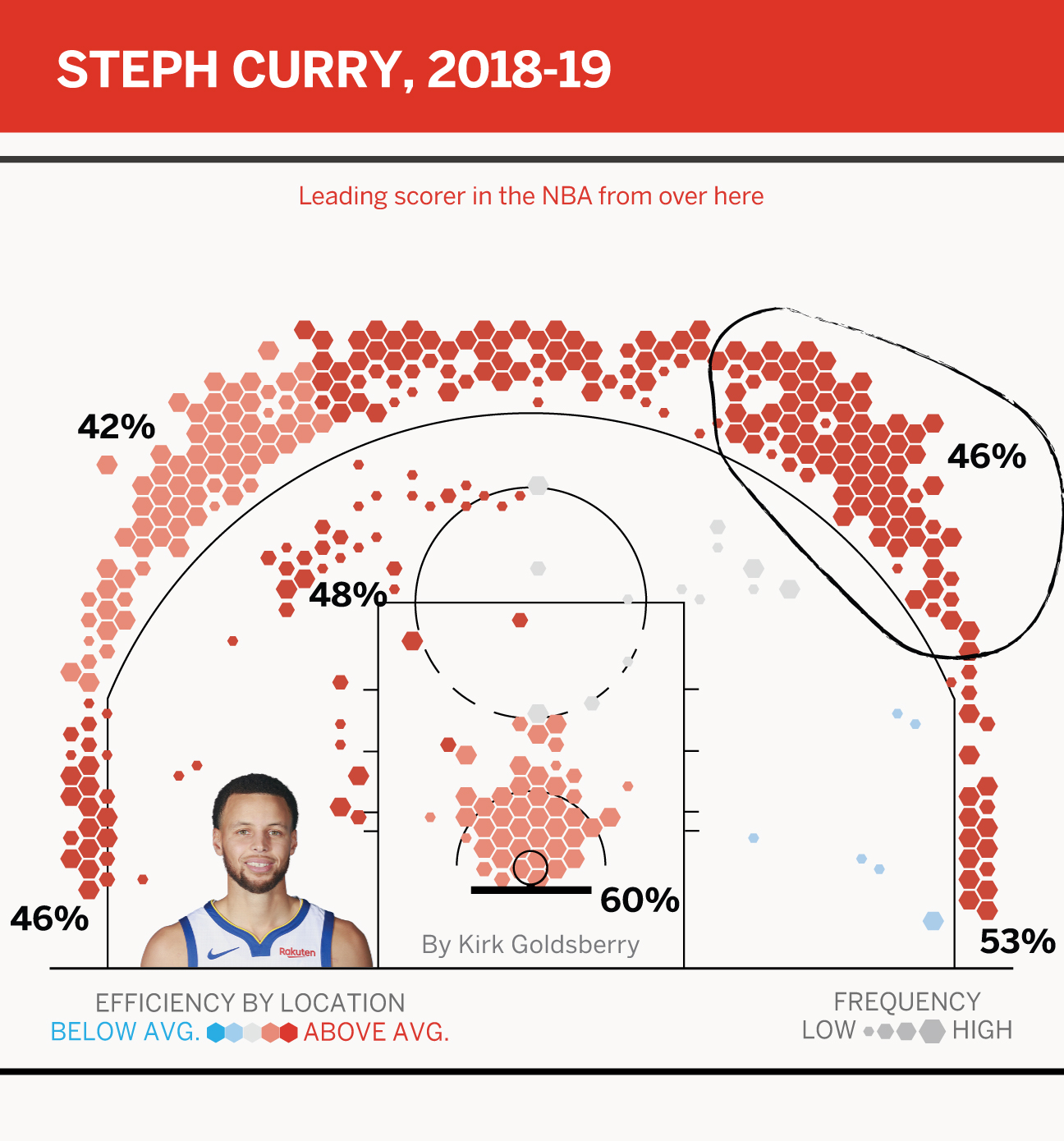 No player in the NBA scored more points than Curry from the left wing area this year (and nobody hit more 3s from the left corner either).

And these are rarely easy looks. Given the shot location, type and typical defender distance, the average NBA shooter would convert these attempts at a 49.3 effective field goal percentage (eFG), according to Second Spectrum tracking data. Curry soars past that with a 63.4 eFG.

One reason the Splash Brothers are terrifying is that they thrive from different spots. While Curry kills it from the left side of the arc, Klay Thompson is more active and more effective from the other side.

Thompson led the NBA in made 3s from the right wing this year: 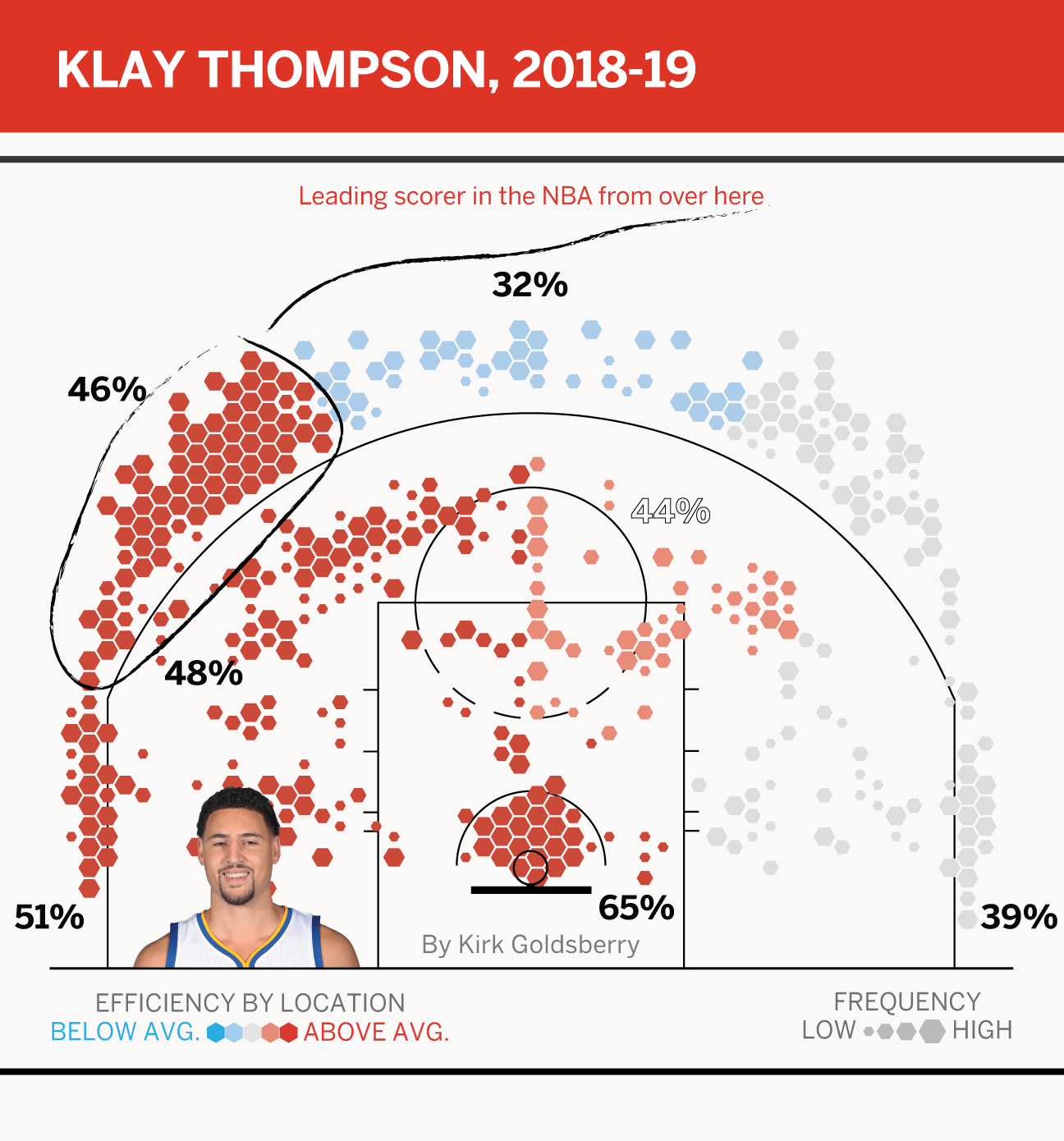 Thompson also leads the NBA in catch-and-shoot 3s on the move from this area -- a shot that is projected to convert at a 51.1 eFG. But Klay? His eFG on those looks is 71.9, per Second Spectrum.

To contextualize just how prolific these guys are, check this out:

They've got the arc covered.

As good as the Splash Brothers are, they often get help from some of their friends.

In the big Game 6 win at Houston, it was Andre Iguodala who provided the big boost, nailing five 3s on eight attempts. But that was an anomaly -- 34 percent of his shots come in the restricted area. 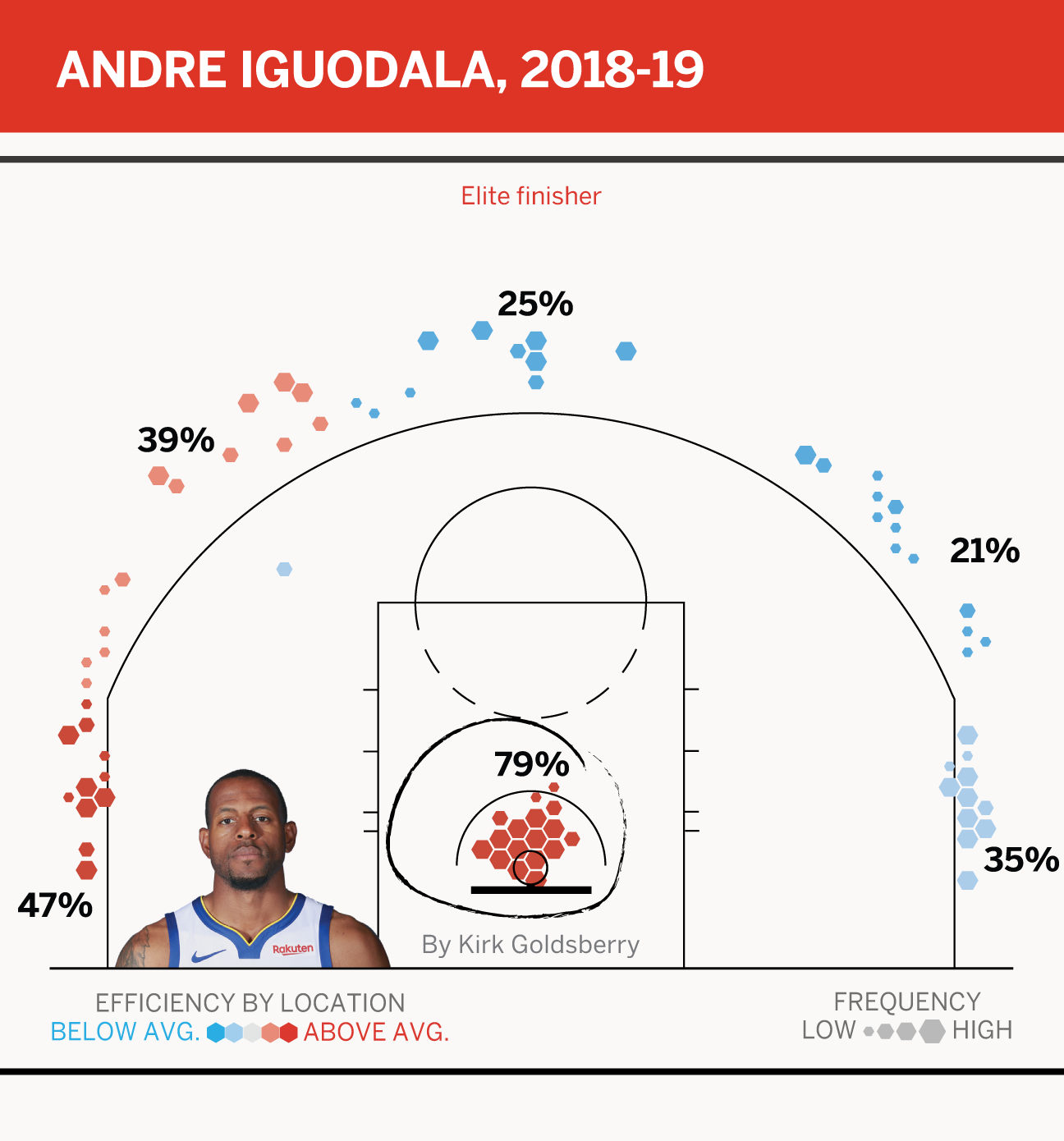 Even though he's 35, the dude can still finish at elite rates. The Warriors love when Iggy is hitting 3s, but watch him around the rim in this series.

OKC learned the hard way that Damian Lillard's range is unusually deep. This season, he launched 252 shots from beyond 27 feet -- trailing only Trae Young, Eric Gordon and Brook Lopez, per Second Spectrum.

Lillard's epic buzzer-beater to finish off the Thunder was also an off-the-dribble triple, which has become his signature scoring play. Lillard attempts more than five of them per game, trailing only James Harden and Kemba Walker. But Dame hits them at higher rates than those two, sinking 36.5 percent, according to Second Spectrum.

Lillard may not be as great as Curry from downtown ... but who is?

He's still capable of this: 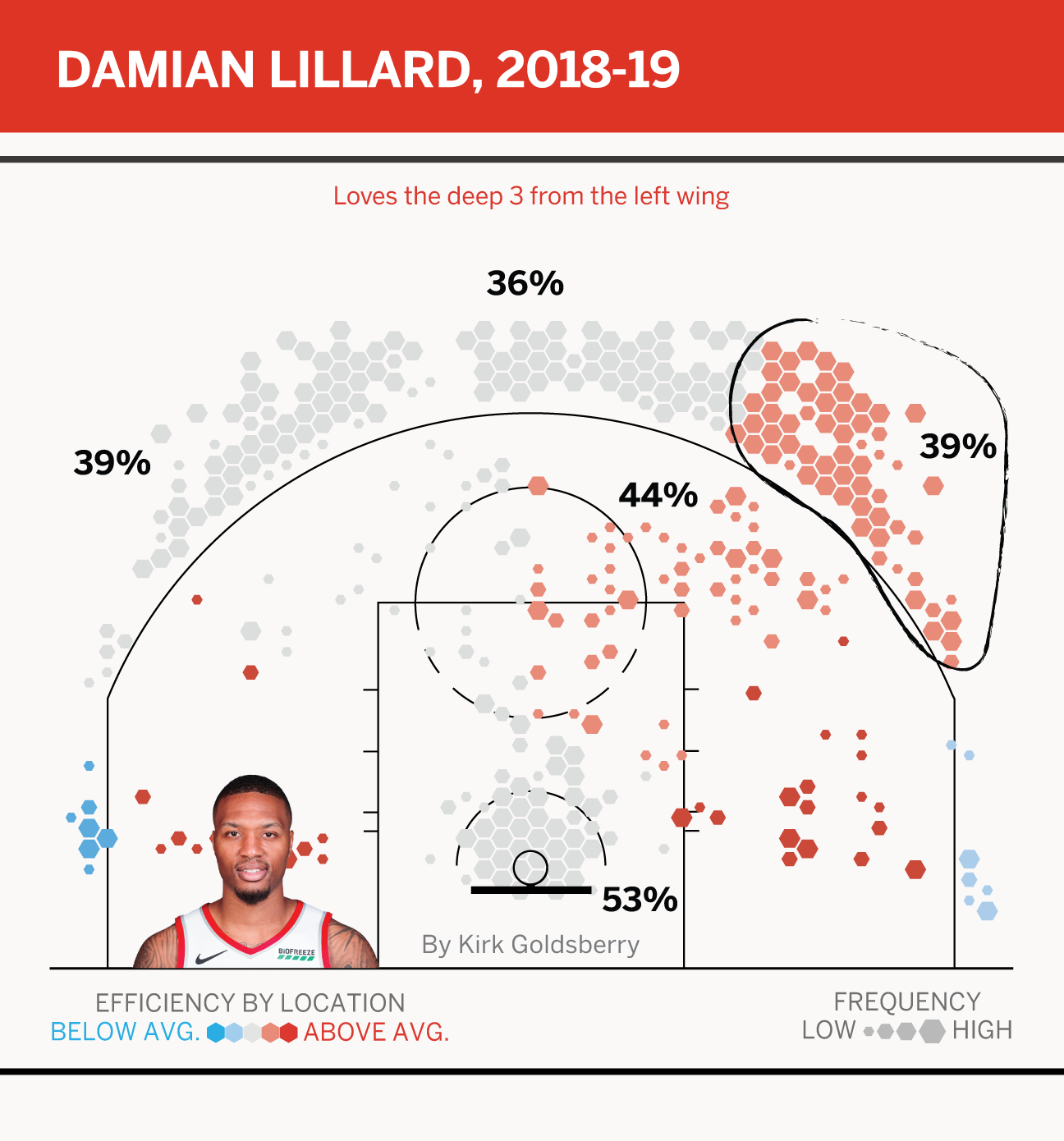 When the Blazers need a bucket in this series, they know one reliable place to look.

On the list of best midrange shooters in the NBA you'll see names like Durant, Kawhi Leonard and CJ McCollum, whose terrific midrange skills were on full display in Sunday's huge Game 7 win over the Nuggets. These dudes are so good in the midrange, they defy the conventional wisdom suggesting midrangers are foolish shots. 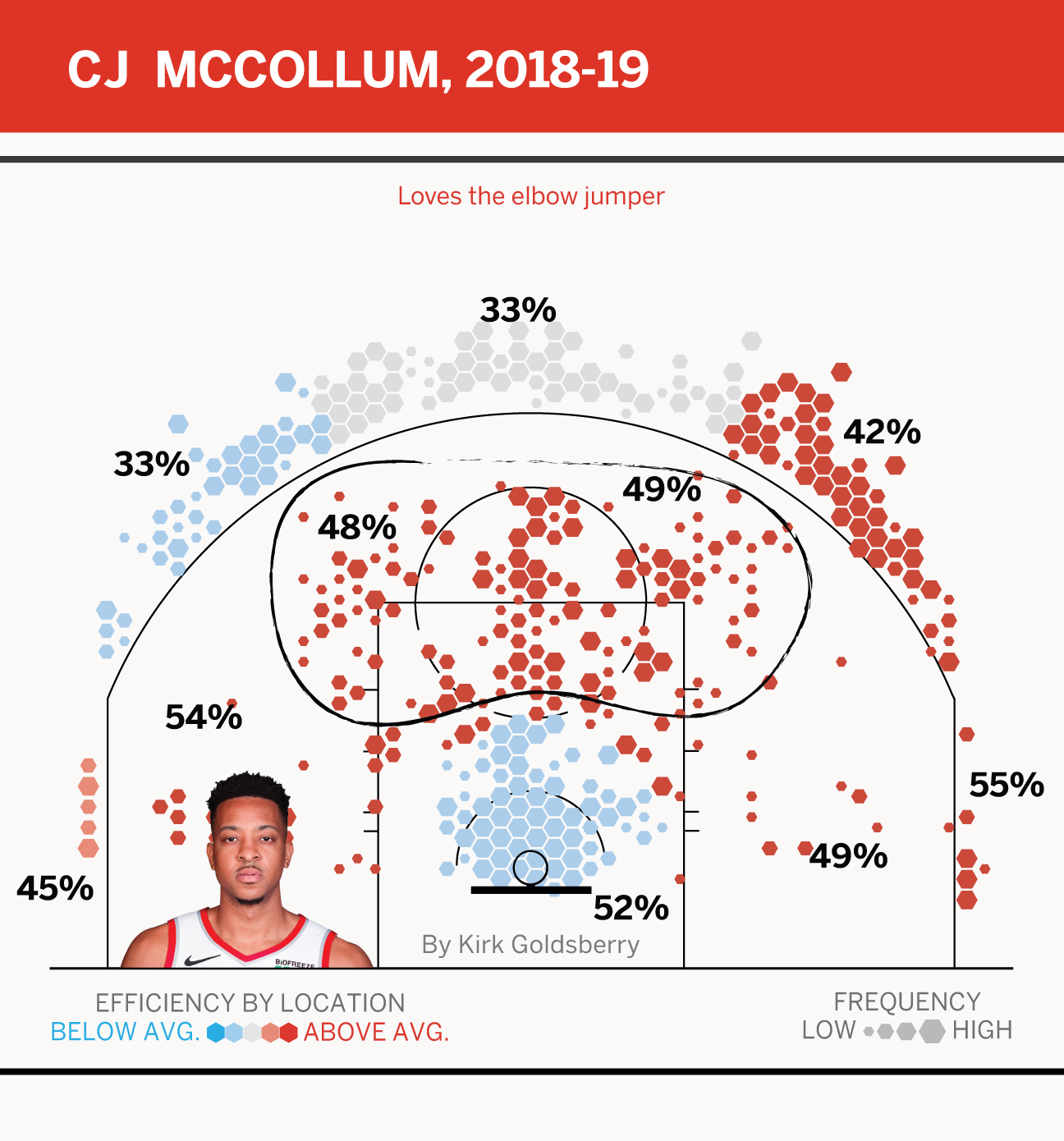 McCollum can score from anywhere. Only three of McCollum's 37 points in Sunday's Game 7 came from 3-point range. He was unstoppable in the paint, and the midrange is the defining element of his game.

Of the players who attempted more than 150 midrange pull-ups this season, McCollum ranked third in eFG (behind Durant and JJ Redick). McCollum's 51.8 eFG is 14.3 percentage points better than expected for the average shooter given shot quality, per Second Spectrum tracking. And that means this is a pretty great attempt:

He'll have to keep this up for Portland to have any hope in this series.

Enes Kanter has emerged as Portland's No. 3 scorer in these playoffs, posting 12.9 points per game. But unlike Lillard and McCollum, Kanter can't shoot.

Still, he's productive around the rim thanks to his smooth footwork and dominance on the offensive glass. Kanter is grabbing almost four offensive boards per game in the postseason, and 38 percent of his points are coming on second-chance opportunities. 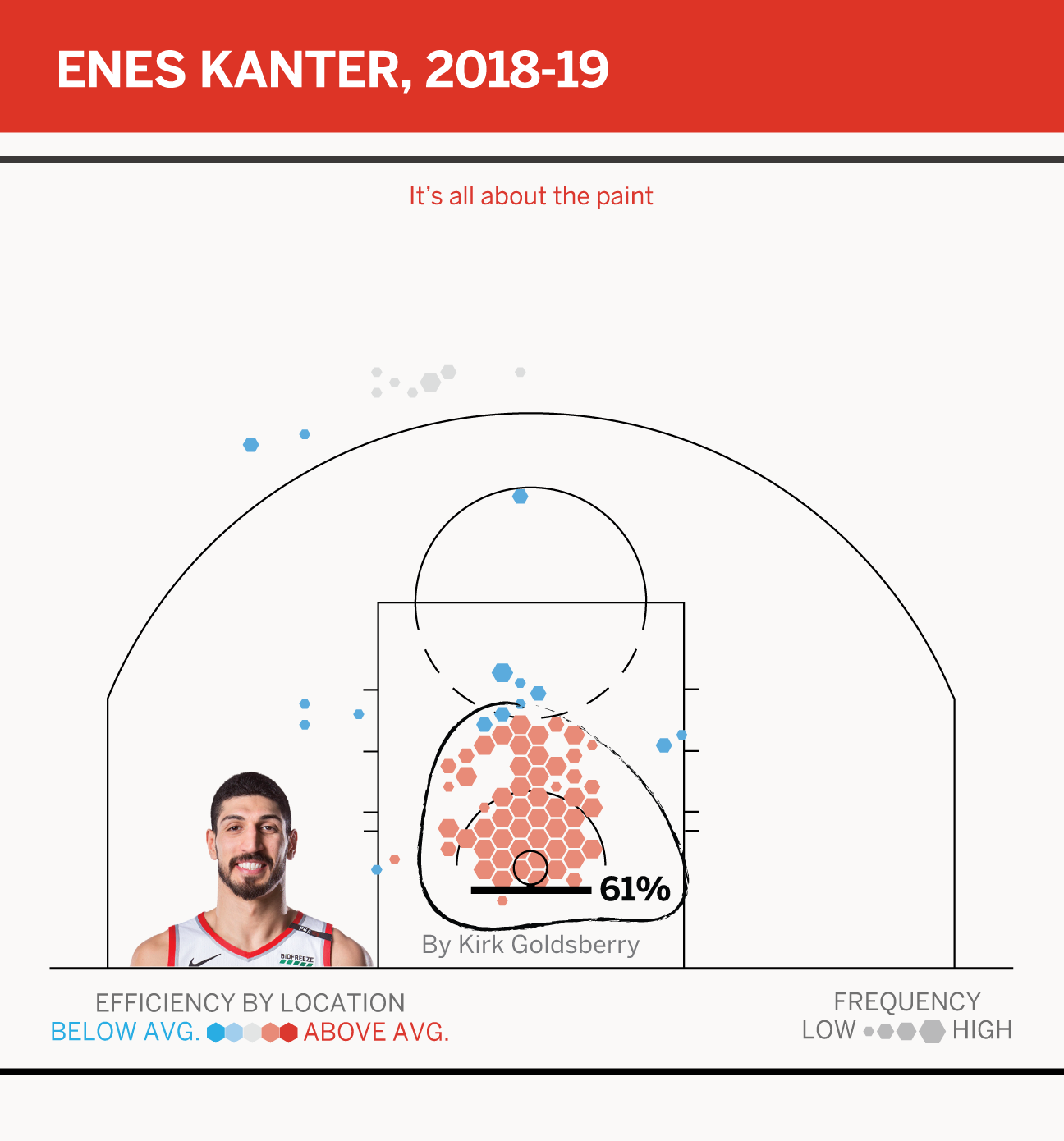 Golden State has to find ways to keep Kanter off the offensive boards.

That's easier said than done, especially if the Warriors choose to go small.