MILWAUKEE -- The Milwaukee Bucks had been shading Kawhi Leonard for days, taking away the largest, strongest and most decisive right hand in basketball. But with his Toronto Raptors trailing by a bucket inside of nine minutes remaining in Thursday's Game 5 of the Eastern Conference finals that were knotted at 2-2, Leonard got a long step on his defender, Khris Middleton, and burrowed into the paint with his right.

Leonard was low to the floor -- more a lunge than a drive -- and as his tired legs nearly lost their balance against a collapsing Milwaukee defense, he slung a pass to the left corner, where Raptors reserve guard Fred VanVleet stood waiting, unguarded.

That VanVleet was wide open was both apt and no guarantee of success. Though the Raptors were a slick-shooting squad through the latter half of the regular season (tops in the NBA after acquiring Marc Gasol), they had struggled to convert clean looks through much of the playoffs -- and no one more than VanVleet. Prior to Toronto's Game 4 home victory, VanVleet had missed 30 of his previous 35 attempts beyond the arc. But with his confidence restored after an efficient 13-point outing on Tuesday, VanVleet drained the open look -- one of his seven 3-pointers on the night -- to give the Raptors their first lead in the second half.

Over the next 60 seconds, Leonard would receive two more high screens, each drawing Bucks center Brook Lopez on the switch. Both actions would yield deliberate but nasty step-back 3-point jumpers by Leonard over Lopez.

In the biggest quarter in Raptors franchise history, the thaw of a long, cold spring had finally arrived -- and Leonard was the heat source turning thick ice into a steady flow. The Raptors would ride Leonard -- who scored or assisted on a career-high 62 points -- to a 35-point, 9-assist, 7-rebound performance to defeat Milwaukee 105-99 and take a 3-2 series lead.

Most uncontested 3s in a game (last five postseasons)

"They were sending two or three bodies at him, and kind of tilting the floor and making sure guys were loaded on him," Raptors guard Kyle Lowry said of Leonard. "He was making the right passes, and we made some shots for him tonight. And then third quarter, he just -- he's been doing it all playoffs. He went into iso and get-to-your-spot, and it was pretty impressive. The game he played tonight -- 35, 9 and 7 -- was a pretty good game. It's a pretty good game on the big stage and on the road. Superstar. Superstar."

Lowry's appraisal of "pretty good" was said for understated effect, and the same can be said for the Raptors' half-court defense. For the third consecutive game, the high-octane Milwaukee offense has produced minuscule results. On Thursday night, the Bucks generated only 83.1 points per 100 possessions in the half court.

In many respects, the Raptors are beating the Bucks with the brand of scrambling, quick-to-collapse/quick-to-recover defense that had become Milwaukee's calling card. With Leonard taking the lead, Toronto accounts for Bucks superstar Giannis Antetokounmpo with multiple bodies, help coming from all directions -- weak side, baseline, perimeter. 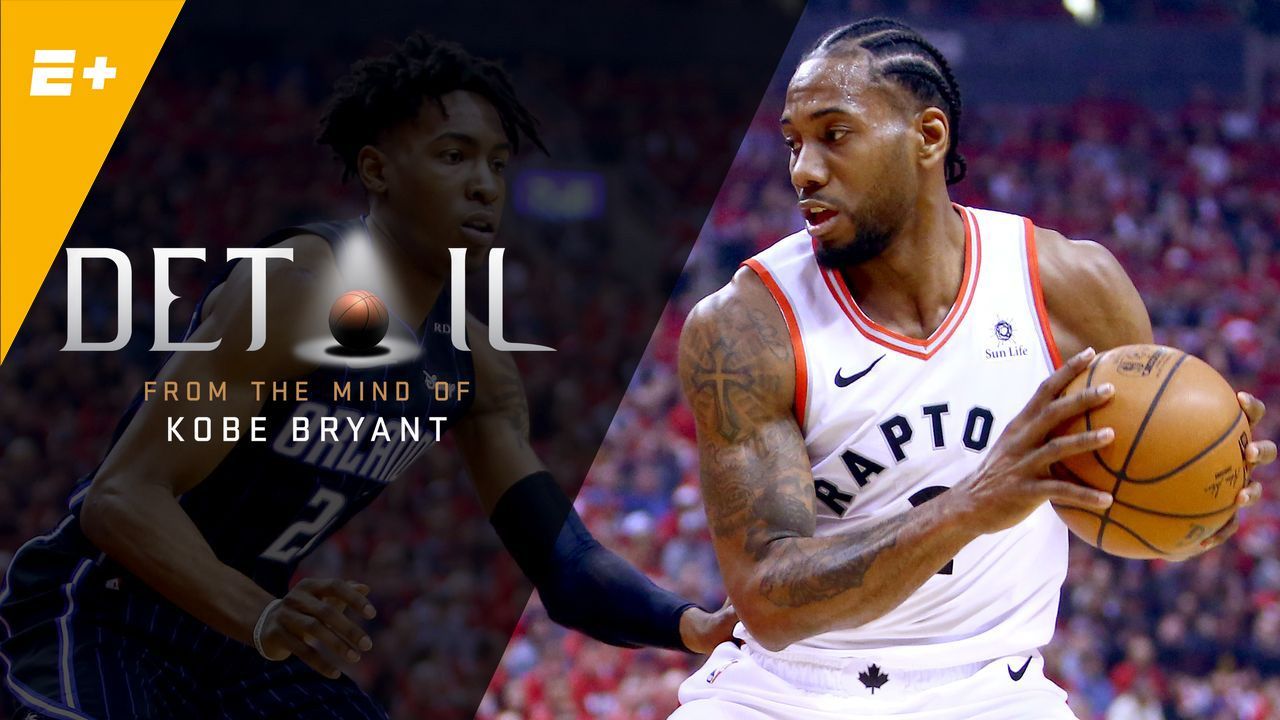 Kobe Bryant breaks down Kawhi Leonard's game, and suggests he could take his game to the next level by crashing the offensive boards like Michael Jordan did. Watch Kobe's "Detail" on ESPN+

Asked for the principles guiding their fluid rotations, Lowry told ESPN, "Play f---ing hard, send bodies, then rotate. It's not science. It's understanding the rotations, who's going, where they're going and knowing who's going to help and get out. It's tough to do, but you have to do it in this situation."

In Game 4, we saw the collective intelligence of Toronto's core on the offensive side with smart ball movement, heady misdirection and timely passing. In Game 5, that high IQ was evident in a masterful execution of the defensive game plan.

For 48 minutes, every Raptor on the floor moved decisively to plug gaps. In the final 20 minutes of action, the Bucks generated only three uncontested shots in the half court -- an alley-oop catch by Antetokounmpo and a couple of pull-up jumpers off the dribble by Eric Bledsoe. The first is unstoppable, the other two tolerable.

"The rotation comes from wherever," Lowry said. "We talk and communicate -- 'Go, go, go.' Marc will say, 'K-Low, you go.' Kawhi, Danny, Freddie. Everyone is talking. You hear the communication, you hear the professionalism, you hear everyone with an understanding of what's the next move, who's going where, who's taking responsibility."

This is entirely by design. Through a series of trades over the past year, the Raptors have populated their roster with two former defensive players of the year in Leonard and Gasol; three more All-NBA Defensive Team honorees in Lowry, Danny Green and Serge Ibaka; a spidery young stopper in Pascal Siakam; a bulldog in VanVleet; with Norman Powell no slouch for a wing of his size. There's not a weak defensive link on the roster, no one who can't be trusted with a help decision.

Offensively, the Raptors exacted just enough punishment against Milwaukee's adjustments. For example, in a possession reminiscent of VanVleet's big corner 3, Leonard drove hard into the paint, then delivered a timely kickout with five minutes remaining in the game to Gasol for an open 3-pointer. Gasol spent much of the night guarded by Antetokounmpo, who took the opportunity to help freely but was made to pay on what was an enormous shot in a tight affair.

"Every game is different," Gasol said. "Every game has its own wrinkles. Every game goes its own way. You have to be ready for whatever is thrown at you. Tonight, obviously, they changed the way they played defensively in their scheme, and we got to continue to play downhill and continue to be aggressive and attack the paint."

Earlier in the postseason, Lowry said the Raptors could match basketball wits with any team in the NBA, and their cerebral play on Thursday now leaves them just one home win away from their first NBA Finals.

As they returned to Toronto for Saturday's Game 6, the magnitude of the last year's events came into focus. Leonard didn't ask to land in Toronto for the 2018-19 season, and he has made no promises he'll remain there long term. Yet the Raptors organization made a calculated gamble: They bet on themselves. They wagered that if they could help Leonard maintain his health and surround him with a cast of competent, competitive and smart teammates, they could outlast the rest of the Eastern Conference.

In the NBA, winning is the most powerful tool of persuasion.