LET'S FORGET FOR a minute that Drake is a brand ambassador for the Raptors who is paid to cheer and do whatever he can -- outside of neck rubs on the sideline -- to provoke opposing teams. Or that he and Draymond Green went to dinner just the night before the Golden State Warriors beat the Toronto Raptors to even up the NBA Finals at 1-1.

None of that mattered in the closing seconds of Sunday night's second quarter, when referee Tony Brothers whistled Green for a foul on Pascal Siakam -- the man Green had publicly sworn to stop after his spicy 32-point Game 1 -- and Drake started to gloat.

Green thought he was playing tough defense on Siakam as he dribbled near half court. He very nearly came away with a steal as the young Raptor turned to his left, leaving the ball exposed. But Brothers blew his whistle. And Green was angry. He yelled at the top of his lungs, then swung his fist and twirled in protest.

Drake was right there in his face, mimicking his reactions. For those who have watched Green for years, it looked like a recipe for disaster. Things were going to escalate. You could almost feel the technical foul coming. Historically, all it has taken is a little spark for him to ignite and burn everything down, including himself.

Green turned toward Drake. Then back toward Brothers. Then he turned away and took a breath. Warriors coach Steve Kerr came out to protest for him (to no avail). Siakam stepped to the free throw line and hit one of two. On the next possession, Siakam fouled Stephen Curry with four seconds left. Curry hit both in the final seconds of the quarter, sending the Warriors to the locker room having cut a 12-point deficit to five.

Green's foul was one play, which led to, at most, a three-point swing. But to those who have followed Green along his highly flammable path from unheralded second-round pick to three-time NBA champion, it was monumental.

In a big moment, with the Warriors needing a big play to get back into the game -- and the Finals -- with Drake in his face and the guy he'd called out in his sights, Draymond Green did not combust.

"It's all about, 'Is [the fire] working for me or is it working against me?'" Green says. "When I'm channeling it to work for me, I think I'm one of the baddest motherf---ers on the planet. When it gets the best of me, I'm not so good."

EVIDENCE OF THIS type of self-control has been happening with greater frequency for the past couple of months, if not yet in the crucible of the Finals. Green hasn't picked up a technical foul since April 30, in Game 2 of the Warriors series against Houston. It was later rescinded by the league.

"Bob said, 'If we're going to win a championship, you have to get in shape,'" Green says. "I was like, 'Oh, I know. I'm fat as hell right now. Give me two weeks. It will probably take 10 days, but give me two weeks for sure and I'll be good.

Green cut out all his vices. Chips, red wine, fast food. All gone. He ate exactly what his chef told him to. He lived in the training room, lifting weights and doing extra cardio. And then when he got the weight off, he decided to stick with the diet.

"When I went on this diet, it's like a sense of control, and it's confidence because you feel like you're conquering something," Green says. "You're defeating something every day.

It has showed through the playoffs. Green has had arguably his best stretch as a Warrior, putting up six triple-doubles across the team's 18 playoff games -- coming just one assist shy on Sunday of recording a fourth in a row.

And it's gone even deeper than that: For Green, real control is understanding why he so often lost his composure and went past the edge.

It's been a constant challenge for him and anyone who has coached or played with him over the years. He's had countless blowups with Golden State coach Steve Kerr in their five years together. Last fall he famously blew up at Kevin Durant over his impending free agency during a game against the Clippers -- a tirade so intense, the Warriors even had to suspend Green.

At the time, Green tried to explain it away, saying he gets in all his friends' faces from time to time. But out of the spotlight, Durant wasn't buying it. He told Green he's seen him argue with friends and it never rose to that level.

Green now says he realized Durant had a point. He had been out of control.

"Absolutely," he says. "I thought about it, and it goes back to, 'Is this [losing control] working for me or against me?'"

For Myers, this is where the real change in Green is evident. "It shows a lot for him to be able to acknowledge and say, 'Yeah, Kevin's right in that comment,'" Myers says.

At Michigan State, the staff used to call Green's mom, Mary Babers-Green, when he'd get argumentative and difficult.

"When we thought he was going to have one of those moments where he needed to be reeled back in," Spartans assistant coach Dwayne Stephens says, "she'd drive up [from Saginaw, Michigan, to East Lansing]. We'd sit out in the conference room and she'd say, 'Listen, this is what they need you to do. Stop acting like a so-and-so.' He'd always come out of it. By the time she left, everybody was on the same page."

Historically, the real challenge has been to reel him back in without losing the specialness that makes Green an All-Pro. To meet his fire with fire and somehow do no collateral damage.

"He just plays with that edge and that chip on his shoulder because it seems like he's always been doubted," Stephens says. "And I think he felt like he had to play that way in order to be successful.

"Tom Izzo allows guys to go back at him and challenge him as long as they bring the goods. Draymond needs to be heard and wants to be heard, so in that sense, I think Coach Izzo was a great coach for him."

His high school coach, Bruce Simmons, tried to teach him to channel his emotions into competition.

"His freshman year at Michigan State, he got one minute against Ohio State," Simmons says. "He called and said, 'Coach Bruce, I'm going to transfer. F--- this s---.' And I said, 'Noooo. We don't do that. This is what you're going to do. You're going to go into practice. [Senior] Marquise Gray is getting your minutes. Bust his ass. Talk s--- to him. And then when you're doing that, look at Izzo, because Izzo is putting this [guy] on the court instead of you.'"

Simmons still corresponds with Green frequently and tries to counsel him. "The older I've gotten, I've learned to deal logically with situations instead of with emotions," Simmons says. "So I tell him, 'Kid, you made it. You ain't that second-round kid trying to make a team. You made it. You're a big reason why Golden State is winning. So you gotta take that right path when you express yourself.'"

THIS SPRING, GREEN'S fiancée, Hazel Renee, and mother Babers-Green double-teamed him on a variety of issues: his treatment of teammates, coaches, referees, even his own health. 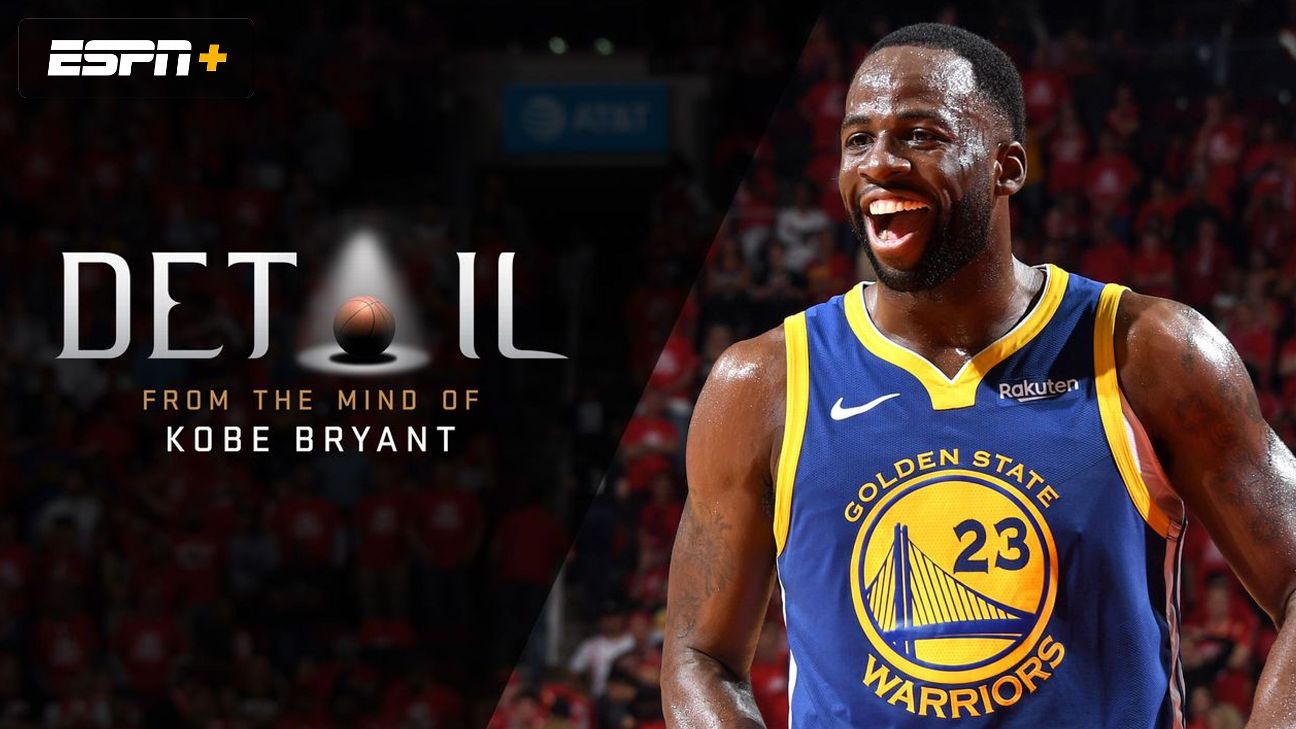 "They kind of sat him down like, 'Listen, you gotta chill out,'" Stephens says. "He was watching his son [Draymond Jr.] shoot on the hoop and he's flopping and he's like, 'Oh man. Is that what I look like? I had no idea how much energy I was wasting arguing calls and doing all of that crazy stuff.'

"Now he's just playing. He's not complaining and arguing as much. He's being a leader and a voice for his team and watching defensively, knowing what the other team's going to run, calling yourself out, telling people where to go. You see him do that stuff now, this kind of reeling himself back in.

"That talk he had with his mom and fiancée really got him refocused."

Like any diet, this type of self-control is hard to stick to long-term. Green says he likes the way he feels now and wants to stay healthy and in shape as long as he can. Frankly, his future depends on it.

If he became the type of player who brought his team only tantrums and infighting, Golden State might not have returned to the NBA Finals again, let alone had a chance to win. If his November feud with Durant was a preview -- if that was how he was going to age -- why would the Warriors be inclined to extend him this summer?

Just as important as the mental conditioning that Green's diet brought to his game has been Renee, to whom he proposed in January.

"She's a lot like my mom," Green says. "When I'm making decisions now, somewhere in my mind is like, 'Will she approve of it?'

"That definitely makes a difference, having that peace in life all around. So many times, we forget that everything matters. Everything. It's not just about the game of basketball. Everything in a person's life matters -- whether you're a CEO of a Fortune 500 company or an NBA player. When you find that person who does that for you, it matters. And I feel like I'm at peace in life right now. So I'm at peace in the game of basketball."