EL SEGUNDO, Calif. -- The Los Angeles Lakers will begin the second half of their schedule Saturday against the Houston Rockets and hope to have both halves of their big two in the lineup.

Anthony Davis, out the past four games after taking a hard fall on his backside against the New York Knicks, did not practice with the team on Friday and is listed as questionable for the Rockets game.

Davis did go through an individual workout on the court after practice, however, mixing in light sprinting and spot shooting in a full-court drill with several members of the Lakers coaching staff.

The eight-year veteran is expected to make his decision to return Saturday based on how he responds to his pregame workout, a league source told ESPN. He remained questionable Saturday afternoon.

The Lakers have gone 3-1 in Davis' absence, but coach Frank Vogel didn't try to hide how much he misses having L.A.'s franchise big man in the lineup when asked how anxious Davis' absence is making him.

"On a 1-10 [scale]? Twenty? Thirty? Forty? A hundred? Two-hundred? I'm very anxious, but also having the mindset to be very wise and patient and intelligent about an injury to a very important player that we're not going to rush back," Vogel said. "We're going to be conservative and make sure he's right before we return him to play, have a marathon mindset to the season, as we would with all of our players, but in particular someone of his caliber."

Should Davis remain sidelined, the Lakers will continue to start Kyle Kuzma in his place. The third-year forward thrived in his first two games Davis missed, averaging 31 points on 52.2% shooting, but he cooled off in the two games since, averaging 7.5 points on a 30.4% clip.

"I'm excited to get [Davis] back, but you always look to the bright side of things, and it's fun to see other guys get opportunities, to see Kuz get the minutes he's been getting; to see [Jared Dudley] get in there and some of the wings," Vogel said. "I tend to, or choose to, focus on the positives of this and helping those guys grow. There's benefits. When one guy's out, there's always benefits for other guys." 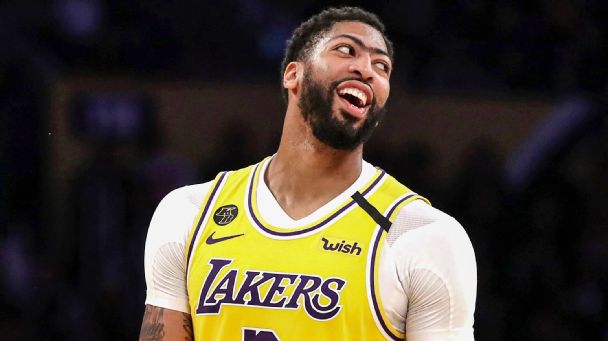 L.A. got positive news on the health of its backcourt Friday. Alex Caruso, who missed most of Wednesday's loss to the Orlando Magic after getting hit in the mouth, was reevaluated for a concussion and tests came back negative. He is still suffering from soreness in his neck but was upgraded on Saturday from probable to available to play for the Rockets game.

Backup point guard Rajon Rondo, who missed the Magic game with a fractured right ring finger, was back on the court Friday. Vogel said Rondo "looked good" and he was listed as questionable, but then downgraded Saturday to out.