On Sunday night, as Cleveland Cavaliers forward Larry Nance Jr. sat down with his family to watch the first two episodes of ESPN's 10-part documentary on Michael Jordan and the 1997-98 Chicago Bulls, he was suddenly transported to his rookie season playing alongside Los Angeles Lakers icon Kobe Bryant.

As he watched an NBA Entertainment camera crew in the Bulls' locker room, capturing private teammate interactions and other moments for "The Last Dance" that so often stayed behind the scenes, Nance began thinking about the 2015-16 season with the Lakers.

That season was Bryant's 20th in the purple and gold of Los Angeles. And just as the camera crew had unprecedented access to chronicle every moment of Jordan's final season with the Bulls, the same holds true for Bryant's final NBA season. The crew expanded in size during his last campaign, and as many as six personal camera crews were present during his 60-point finale.

Bryant's camera crew, several Lakers staffers from that season said, had unparalleled access in locker rooms both at home and on the road, in the training room, throughout the team's practice facility and even on the team's charter plane.

"They had unprecedented and, by far, greater access than anyone else ever," said John Black, who led the Lakers' public relations department for 27 years, last serving as vice president. "We certainly allowed them to do everything we could within what the league would allow, and sometimes, with a wink and look-the-other-way, allowed them even more."

In the wake of Bryant's death in a helicopter crash that killed eight others in late January, what will happen to the exhaustive footage gathered during his last season remains unclear.

Sources close to the matter told ESPN that the footage had been in the editing stages for a potential documentary to be released years from now -- though it is unclear when exactly that would be -- and that Bryant had seen edited material and provided feedback in the months leading up to his death. It is unlikely those plans have changed, the sources said.

A representative for Bryant did not return messages seeking comment.

The sources told ESPN that rather than have anyone else chronicle his season, Bryant, who had produced and starred in his 2015 documentary "Muse," ultimately sought control over the footage, which is why he decided it was best to have his own camera crew take on such a project, especially as Bryant worked to build his own post-NBA media empire.

"Just watching them and being able to view what the cameras were doing to [capture] Jordan's pregame routine, I mean, it's the same thing," said Marco Nunez, who served as the Lakers' assistant athletic trainer that season and is no longer with the team. "Just flash forward ... take out No. 23 with the Bulls and insert No. 24 with the Lakers. Yeah, I mean, it's pretty much identical."

"It's hard for me to not watch that and sort of see those [similar] instances," added former Lakers head strength and conditioning coach Tim DiFrancesco.

There were key differences, of course -- the biggest being that Jordan's Bulls were pushing for their sixth title in eight seasons while Bryant's team ultimately posted a 17-65 season, the worst record in franchise history.

"It was interesting because, obviously, we weren't winning, so that was frustrating. And the [cameras were always] in your face so, I don't know, it was hard," said Robert Sacre, a reserve center for the Lakers that season. "It didn't feel real as a season."

Said Nance: "It was really cool because, like, this is the Black Mamba. But at the same time, like, this is also the worst season in Lakers history. So while I'm really proud to be in the NBA playing with this absolute legend, [that] is not something that I'm really trying to relive."

Rodman: For Better or Worse 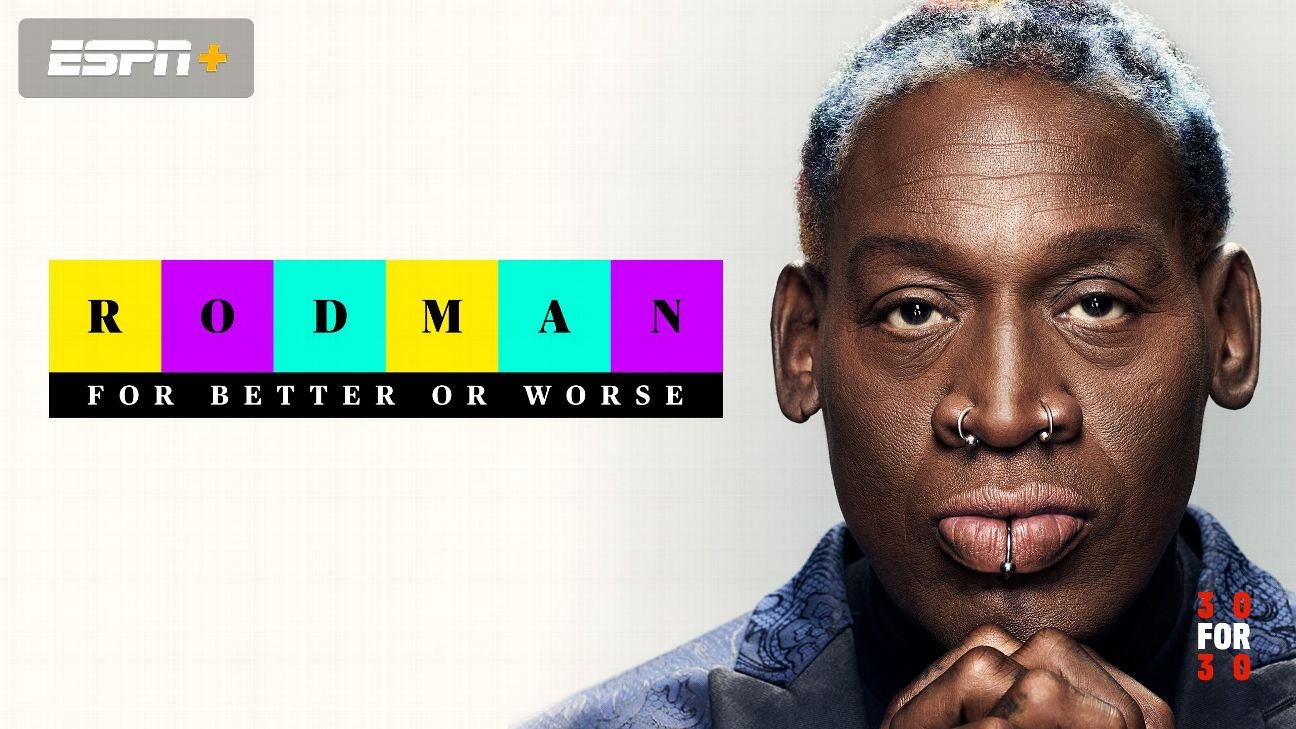 From Detroit to San Antonio to Chicago, from his appearance and his antics to his brilliance and his exuberance, Dennis Rodman crafted a Hall of Fame career on his way to winning five NBA titles in all. Watch on ESPN+

Former Lakers head athletic trainer Gary Vitti compared the situation to a "reality show" and said it was an uncomfortable arrangement at times.

"Everybody just sort of shook their head and said, 'Whatever we got to do, we got to do,'" Vitti recalled. "'Let's just try to do it the best we can.'"

The Lakers, several staffers said, were certainly accustomed to a high level of media attention and cameras being present -- especially with a player of Bryant's stature. Some even pointed to the fact that they were used to cameras gathering footage behind the scenes, as their television partner Spectrum SportsNet has done for their Lakers All-Access TV packages.

But Bryant's crew received what was considered unique privileges, in no small part because they were working for Bryant, several staffers said. And they received access that was even beyond that of Spectrum SportsNet, which had previously signed a 20-year, $4 billion deal with the Lakers, sources told ESPN.

One former staffer, who spoke on the condition of anonymity, said that with previous crews, there was always the option to tell them to turn their camera off if they were gathering footage that might be deemed too sensitive or if they were in an area deemed off-limits. The staffer said they couldn't do the same with Bryant's crew.

Bryant's crew was granted approval from the NBA to shoot footage, though it was limited on the amount of game footage it could record. Still, his crew attended every game, practice and shootaround and followed Bryant off the court and at home.

Having Bryant's camera crew constantly around required an adjustment period for the Lakers.

"It was like, 'All right, we got to really watch what we're saying, watch what we're talking about, because you have no idea who's watching or editing this,'" Nance said. "That's something we all kind of talked about as a team is like, 'Hey, you never know where this is going. So let's just keep it mellow around the cameras.'

"But then the longer the year went on, you just forget about them and just kind of stopped caring."

One particular area that was tricky for filming was the athletic training room, where Bryant spent much of his final seasons as team specialists worked on his injury-battered frame. Previously, when camera crews were present there, which was incredibly rare, they were supervised by team officials. The training room is often off-limits in no small part because of rules related to medical privacy.

"That year, it wasn't rare anymore because they were there every day," the former team staffer said.

At least one member of the camera crew flew on the team charter, several former staffers said.

Nunez described the crew's presence as "controlled chaos." He said that while the crew was nice and respectful, it was clear its members were gathering what they needed.

"So it was kind of a mutual kind of love and hate," Nunez said. "Yeah, I hate that you're here, but I get that you have to be here."

For some staffers, Nunez included, there was a sense that, at the end of the day, history was being recorded.

"I do recall saying, 'This is in some ways annoying to have extra people around at these odd times that [they] aren't normally allowed with a camera on,'" DiFrancesco said. "But in that same conversation to myself, [I was] saying, 'But this will be cool, you know, [however] many years down the road.'"

Eventually, Nance said, he even started to imagine how real-time moments would look on film.

"Kobe would say something in the locker room and I would kind of think about it like, 'Oh, that's gonna look pretty sick when they film it,'" Nance said. "Or, you know, that 60-point game or [him] playing in Philadelphia that last time. 'This is pretty monumental. I'm so glad somebody's going to have a way to remember this.'"