Giannis Antetokounmpo, the NBA's reigning two-time Most Valuable Player, has signed a multiyear extension with the Milwaukee Bucks, the team announced.

Antetokounmpo's agent, Alex Saratsis, told ESPN's Adrian Wojnarowski that it will be for the full five-year, $228 million supermax, including an opt-out after the fourth year.

"This is my home, this is my city," Antetokounmpo posted on Twitter and Instagram on Tuesday. "I'm blessed to be able to be a part of the Milwaukee Bucks for the next 5 years. Let's make these years count. The show goes on, let's get it."

This is my home, this is my city.. I'm blessed to be able to be a part of the Milwaukee Bucks for the next 5 years. Let's make these years count. The show goes on, let's get it. 🤎🙏🏽 pic.twitter.com/895tCBE9RK

Had he passed on the offer, he would have been an unrestricted free agent next summer and the biggest name to hit the market since Kevin Durant in 2016.

Antetokounmpo is coming off a career year in which he became just the third player in league history to win MVP and Defensive Player of the Year in the same season, joining Michael Jordan and Hakeem Olajuwon. He also averaged career highs in points (29.5) and rebounds (13.6) to go with 5.6 assists per game and a 31.9 player efficiency rating -- the highest in a season in NBA history, per ESPN Stats & Information data.

"This is a big moment for me and my family and I want to thank the Bucks organization for believing in us," Antetokounmpo said in a statement Tuesday after the signing was official. "You took a chance on us eight years ago and now putting my signature on a contract like this is unreal."

Milwaukee has finished the regular season with the best record in the league each of the past two years, but it failed to reach the NBA Finals either time. In 2019, the Bucks took a 2-0 lead over the Toronto Raptors in the conference finals before losing in six games. This past season, Milwaukee didn't get that far, falling to the Miami Heat in five games during the semifinals in the Orlando bubble.

For all their regular-season success, the Bucks have reached the conference finals just once in Antetokounmpo's seven-year tenure and haven't reached the NBA Finals since 1974 with Kareem Abdul-Jabbar, who ultimately asked to be traded from Milwaukee after his sixth season as a three-time league MVP.

"I think [Antetokounmpo] should look into his own heart and make a decision based on what's important to him and his professional life," Abdul-Jabbar, who led the Bucks to their lone title in 1971, said to ESPN during a October 2019 trip to Milwaukee. 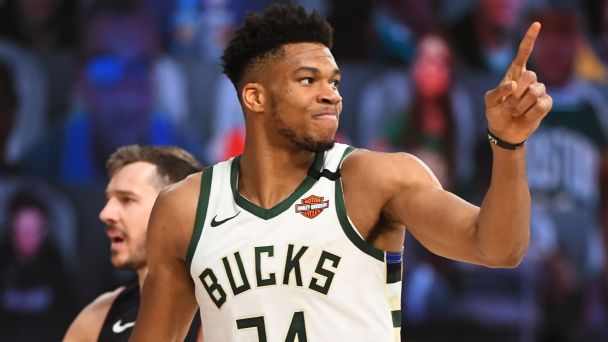 Back-to-back NBA MVP Giannis Antetokounmpo has committed to the Bucks long-term. Here's what you need to know.

• How Bucks sealed the deal with Giannis
• Pelton: Next moves, fallout
• Giannis' competitive fire
• Listen: The Giannis Draft
• How one scout found Giannis

Antetokounmpo was a relative unknown when the Bucks made him the No. 15 overall pick in the 2013 NBA draft. Born in Greece to Nigerian parents, Antetokounmpo was playing in Greece's second division before joining Milwaukee. He averaged just 6.8 points per game as a rookie, starting 23 games, but by his third year, his scoring average was up to 16.9 and he earned Most Improved Player honors. The next year, he made the first of his four All-Star appearances.

Milwaukee reached the playoffs three times in Antetokounmpo's first five seasons with the team, but was eliminated in the first round each time. In 2018-19, Antetokounmpo ascended to being named the league's MVP, becoming the first Bucks player since Abdul-Jabbar to win the award while leading the team to its first playoff-series win since 2001.

Antetokounmpo has improved his scoring average every season he's been in the league, reaching 29.5 last season, when he became the first player since Wilt Chamberlain to average at least 29 points, 13 rebounds and 5 assists over the course of a season. However, his focus has remained winning that elusive championship.

With teams around the NBA clearing salary-cap space in the hopes of pursuing Antetokounmpo next summer, Milwaukee entered a critical offseason hoping to persuade its best player since Abdul-Jabbar to stay by putting together a solid supporting cast.

"Giannis is a once in a generation player and we are beyond excited for him to remain with the Bucks," Bucks co-owners Marc Lasry, Wes Edens and Jamie Dinan said in a statement. "Giannis positively impacts everyone around him on and off the court and he brings a staggering dedication to winning and leadership to our organization. His work ethic and desire to be the best epitomize what the Bucks stand for and what our future holds.

"We thank Giannis and his family for their long-term commitment to Milwaukee and we look forward to many years of success. This is a momentous day for the Bucks, our fans and the state of Wisconsin."

Before free agency, the Bucks agreed to a trade that brought in former All-Star Jrue Holiday as part of a four-team deal. A reported trade that would have brought Bogdan Bogdanovic to Milwaukee as part of a sign-and-trade deal fell apart, and the Bucks pivoted to bolstering their bench, adding D.J. Augustin, Bryn Forbes and Torrey Craig while re-signing guard Pat Connaughton.

The Bucks also added rookie Jordan Nwora with the No. 45 pick in the draft. Antetokounmpo and All-Star guard Khris Middleton both reached out to the former Louisville forward on draft night with an introductory text message, he said, welcoming him to the team and telling him that the "goal is a championship here."

Antetokounmpo, who turned 26 on Dec. 6, joined Abdul-Jabbar and LeBron James this season as the only players to win multiple NBA MVP awards by age 25. He's repeatedly expressed interest in staying in Milwaukee under the right circumstances.

"I've been encouraged my whole career in Milwaukee," Antetokounmpo said after winning his second MVP. "I know that we've gotten better each year, and I know that Milwaukee has great people that view every year the same I do every year, which is to play well, improve and win it all."