Vanessa Bryant revealed in a series of social media posts earlier this week that she was blindsided upon seeing an image of a shoe she helped design, a black and white "Mamba Forever" special edition of the Nike Kobe 6 Protro, from her late husband Kobe Bryant's signature series with the brand.

The specific colorway in question, featuring subtle gold accents throughout, was created as a tribute to her daughter, Gianna.

"It was going to be called the MAMBACITA shoe as an exclusive black and white colorway on her daddy's shoes," she wrote in one post. "I picked the colors in honor of her uniform, the number 2 she wore just like her uniform, the inside pattern, Kobe and Gigi on the back in gold instead of Kobe's signature, the inside shoe details [butterfly, wings, halo], etc."

The sneakers, designed in conjunction with Nike nearly a year ago, were originally scheduled to be released this summer before being placed on indefinite hold after Vanessa and the Kobe Bryant Estate elected not to renew the contract with Nike this year.

The heel counter features the names "Kobe" and "Gigi" on opposite shoes, along with the "Mamba M" logo that the Kobe Bryant Estate fully owns the rights to. The Kobe Bryant Estate has also filed for trademarks in the footwear and clothing sector for additional terms like "Mambacita," "Mamba League," "Lil' Mambas," "Kobe Bryant," "Play Gigi's Way" and others.

The shoes, created after the Jan. 26, 2020, helicopter crash that killed Bryant, Gianna and seven other passengers, were intended to raise funds for the Mamba & Mambacita Sports Foundation and to support youth girls sports initiatives, Vanessa Bryant said.

"The MAMBACITA shoes are NOT approved for sale," she wrote. "I wanted it to be sold to honor my daughter with ALL of the proceeds benefiting our @mambamambacitasports foundation but I did not re-sign the Nike contract and decided not to sell these shoes. [The MAMBACITA shoes were not approved to be made in the first place]. Nike has NOT sent any of these pairs to me and my girls. I do not know how someone else has their hands on shoes I designed in honor of my daughter, Gigi and we don't. I hope these shoes did not get sold. @nike"

The confusion around the potential release of the shoes stems from a variety of calendar quirks surrounding the footwear manufacturer's timeline, detailed contract clauses heading into the expiration window and a crucial shipping error both to and from a UK-based official Nike retailer.

The shoes were in fact not officially released as Nike does not plan to do so until a new agreement is reached with Vanessa and the Kobe Bryant Estate, according to sources.

Nike officials were not available for comment when contacted by ESPN. Contacted for further comment, Vanessa Bryant was unavailable. She celebrated her daughter Natalia's high school graduation this weekend.

The original Kobe Bryant endorsement extension contract with Nike was a five-year agreement beginning on the date of the Lakers star's final NBA game in 2016. It expired on April 13.

The "Mamba Forever" Kobe shoes, designed nearly a year ago, were put into production at a Nike factory in Vietnam between the dates of "10/28/20 - 01/13/21," as printed on a series of Kobe 6 Protro tag labels. That timeline is well in advance of the contract's expiration. There was an anticipation of a summer release until contract talks stalled in April and halted those plans.

Typically, sneaker samples in specific colorways of future retail launches are created in size 9 about a year in advance and receive "final confirmation sign-off" about eight months in advance, allowing a window for subtle tweaks to be made and execution before going into production.

The Initial Production Week, or IPW, is then scheduled to begin at the brand's factory partners in Asia, anywhere from five to eight months in advance of a release date, with production for a full run of pairs requiring a span of a couple months to be completed.

For signature sneakers that also require an endorsement contract between a partner and the brand, a clause deep in every contract provides the company the ability to place a sneaker into production in advance of an expiration date, if retail orders have already been placed against the design to be fulfilled, and still sell the shoe after a contract has expired.

Though rare, there are some instances in which this has happened in the industry, such as when John Wall's Adidas JWall 2 sneaker was released at retail during the fall of 2015, after his contract with the company had expired that October.

While the Bryant contract expired in April, another colorway of the Kobe 6 did recently release overseas in May, with an expected June 11 U.S. launch date. The white, black and del sol yellow design was dubbed the "Playoff Pack" edition a decade ago, and is an original colorway worn by Bryant during the tail end of the 2010-11 season.

The POP colorway has largely been expected to be the last Nike Kobe release for the foreseeable future, while contract negotiations continue.

The shoe's coding label includes an "11/11/20 - 01/30/21" production run timeline at a Nike factory in Vietnam -- also well within Bryant's prior contract's active window.

On April 23, 10 days after the contract had expired, Vanessa Bryant posted her pair of white "POP" 6s with the caption "2 More Drops."

Vanessa Bryant says there will be "2 more drops" of Kobe releases. pic.twitter.com/fJA9zraPPg

Less than a month later, a gleaming gold and purple Kobe 5 Protro was released during the week of the delayed 2020 Hall of Fame ceremony in mid-May, 2021. The shoes had been originally created more than a year ago and planned to be released during the fall of 2020, then were delayed in tandem with the Hall of Fame's new 2021 date, at which Vanessa Bryant spoke during the induction ceremony on behalf of Kobe Bryant.

Days before the recent Hall of Fame ceremony, images of the Mamba Forever Kobe 6 leaked on May 12. User @Brandon1an posted product shots of the black and white sneakers clearly showing the "Gigi" and "Kobe" heel text and jersey No. 2, revealing a once-planned summer launch timeline and $180 price.

In the past month, a series of shipping mistakes has led to the current confusion and a small number of consumers in England acquiring the "Mamba Forever" edition of the Kobe 6.

Footpatrol London, a leading UK-based sneaker boutique, mistakenly received several cases of the Mamba Forever Kobe 6 over a month ago. Typically, cases of sneakers are sent to retailers weeks ahead of a release, in boxes containing 12 pairs.

The retailer mistakenly then sent the pairs of Mamba Forever sneakers to raffle winners. Upon realizing the mistake, the store contacted customers through email with the following message:

"We regret to inform you that due to unforeseen circumstances, an error was made on your order for the Nike Kobe VI Protro, causing an incorrect item to be shipped to you.

If you wish to return the item, please feel free to do so free of charge via the returns label found in your parcel.

Please accept our apologies, Thanks

It is believed that none of the sneakers were actually returned to Footpatrol, as customers immediately realized what had instead arrived. Footpatrol did not respond to a request for comment, and has not acknowledged the mishap on social media.

Miles Lomas, a 22 year-old British sneaker collector, immediately tried to get his hands on a pair once he realized the shipping mistake that had taken place in mid-May. It was Lomas' image, on his @Milo_Sneakz Instagram page, that went viral this week, eventually being seen by Vanessa Bryant and shared alongside her text image statement in a two-photo album post on Instagram.

At one point, Vanessa's post had more than 9,500 comments from users largely criticizing Nike, under the impression that the shoes had been released. The comments have since been turned off and are no longer visible.

Bryant also posted a screenshot to her Instagram post of a user's comment specifying that Footpatrol London had shipped the wrong shoe to raffle-winning customers by accident. She called attention to the comment by circling it in pink and drawing a question mark next to it.

"I didn't win the Footpatrol raffle," Lomas clarified to ESPN in a phone interview. "Somebody won the Footpatrol raffle, and I saw people posting about it in UK buying and selling groups. I paid £420 [around $600 USD] three weeks ago on my pair. I knew something wasn't right. Obviously, when Gigi's name is on it, and the fact that Vanessa owns all the trademarks for the logo on the back, I thought something wasn't right. I thought, 'I better buy a pair.'"

He confirmed the tag label on the Mamba Forever sneaker in his possession has a November 2020 production date. After acquiring his pair, Lomas facilitated the purchase of another pair for a buyer in the US for $900. A former footwear retail worker himself, he believes as many as two or three cases of the shoes were mistakenly sent to Footpatrol, leading to a few dozen pairs now mistakenly in the hands of customers, though not intended by Nike to be released.

With the shoes beginning to sparsely circulate online on sneaker marketplaces, Milwaukee Bucks All-Star Khris Middleton acquired and wore a pair during the sweep-clinching Game 4 of the team's first-round series against the Miami Heat on May 29. 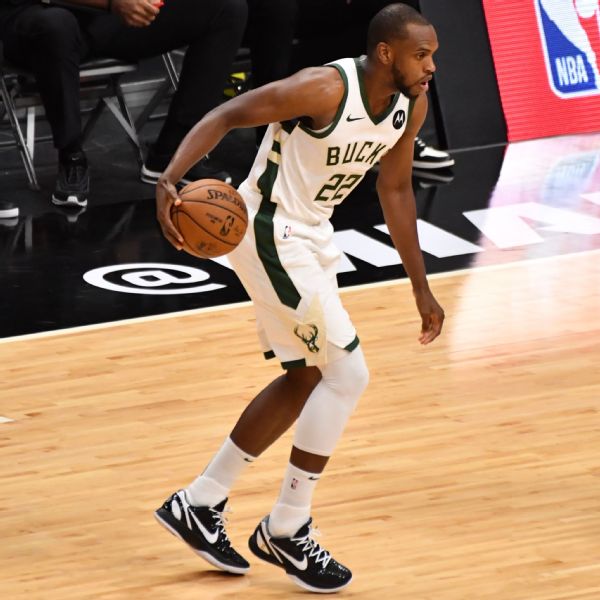 "I don't really understand why it was my image that has caused such absolute havoc," said Lomas, also bringing up the under-the-radar sighting on Middleton. "I scrolled down Instagram and I saw my right hand in seven out of 15 posts [in a row.]"

A huge NBA fan, Lomas has collected Kobe Bryant sneakers for several years and traveled to the U.S. to attend NBA games in person, even catching a Lakers game in Brooklyn toward the end of Bryant's career. His brother's son was named Kobe in 2019 as a tribute to the Lakers star.

Upon seeing Vanessa's post, in which she mentions not yet receiving the shoes herself, Lomas said he directly messaged her and offered to send his pair, though she has not responded.

"I just wanted people to know they were out there. I did feel sorry for Vanessa," he said. "I'd happily send my pair to her."

Since May 14, 51 pairs of the Mamba Forever colorway have been sold on sneaker resell marketplace StockX, with prices initially hovering around $1,000 and immediately spiking after Vanessa Bryant's post on June 3. A size 10 pair sold recently for $3,300.

Shortly before 8 p.m. ET on Friday, StockX removed all listings of the sneakers.

Marketplace app GOAT does not have any listings of the shoes, restricting users from creating a sell page for that specific colorway, though dozens of other Kobe 6 colorways have active listings. EBay is actively removing listings of just the Mamba Forever colorway.

As it stands, according to brand sources, there are no plans to officially release the Mamba Forever colorway of the Kobe 6. Though thousands of pairs have already been produced, the shoes are indefinitely on hold and will release only if a new contract agreement is reached with the Kobe Bryant Estate.