MILWAUKEE -- In the immediate aftermath of a legendary performance to close out the 2021 NBA Finals and win a championship for the first time in his career, Milwaukee Bucks superstar Giannis Antetokounmpo declared that he signed his five-year, supermax contract extension prior to the season because "there was a job that had to be finished," and that staying in Milwaukee meant doing it the "hard way."

"I just couldn't leave," Antetokounmpo said after putting up 50 points, 14 rebounds and five blocks to lead Milwaukee to a 105-98 victory over the visiting Phoenix Suns in Game 6 of the Finals, delivering the Bucks their second championship -- and first in 50 years. "There was a job that had to be finished.

MVP Giannis By The Numbers 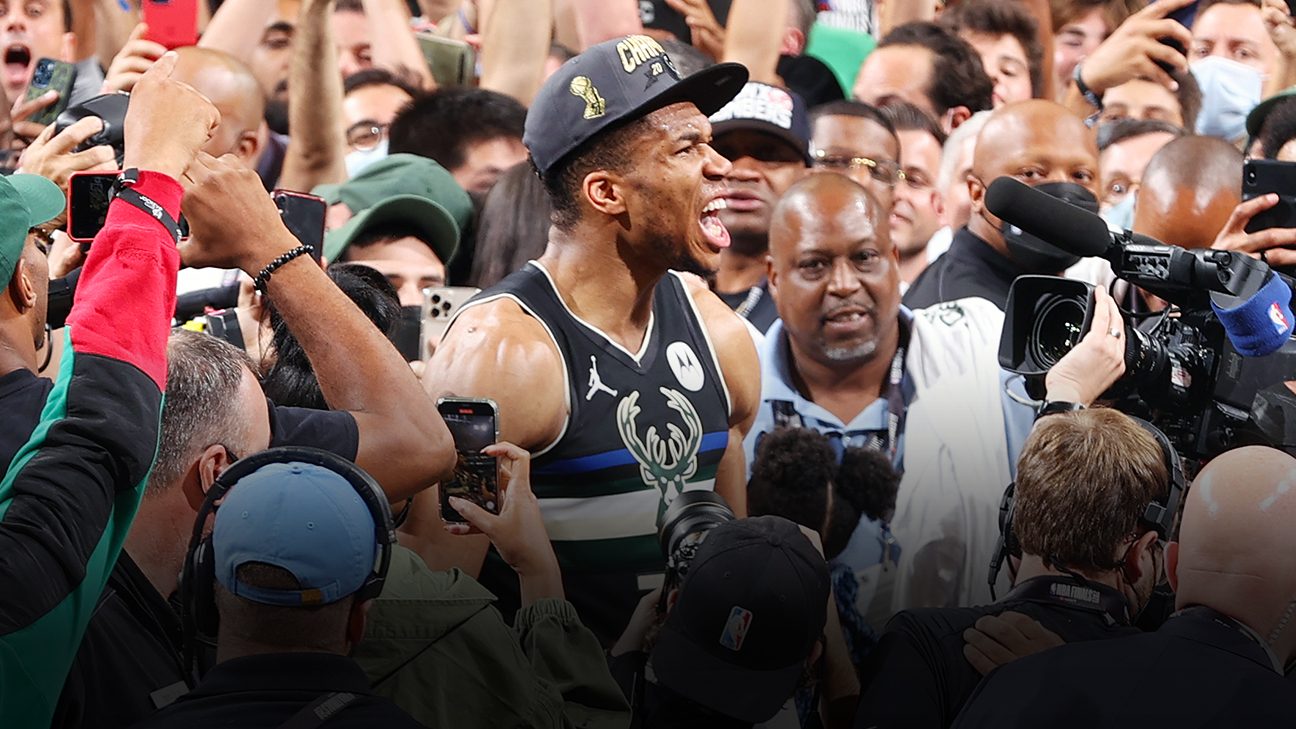 1: Only player in NBA history with 5 All-Star selections, 5 All-NBA selections, multiple MVPs, 1 Finals MVP and 1 DPOY before his 27th birthday

3: Joins Michael Jordan and Hakeem Olajuwon as only players to win MVP, Finals MVP and Defensive Player of the Year since the DPOY's inception in 1983

9: Ninth player to win multiple MVPs and a Finals MVP in his career. The only players to do this at the age of 26 or younger are Tim Duncan and Kareem Abdul-Jabbar

Antetokounmpo, who came into the postgame news conference wearing goggles, carrying a cigar and drinking out of a full bottle of champagne, eventually sat down at the dais with the Finals MVP trophy on one side and the Larry O'Brien Trophy on the other.

It was the culmination of a career that began in the Greek second division, where he first made a name for himself playing in Athens, before eventually being drafted 15th overall by the Bucks in 2013.

In thinking back on all of the people who helped him reach this point -- from his mother, to his late father, to his longtime girlfriend, to his brothers -- Antetokounmpo got emotional as he tried to express how much all of their sacrifices and support over the years had meant to him.

"This is for my mom," he said, fighting off tears. "She works extremely hard every day for me to be in this position, and she never pressured me to do other things. This is for my dad. He's watching from above, and he can see it. This is for my significant other. Every day, she helps me be a better person. She lets me do what I'm supposed to do. She takes care of my son. And for my brothers.

"I can be stubborn sometimes. I can disconnect myself from the world because I want this so bad. And I was able to get it, that's why I was tearing up. But, like, people helped me be in this position. I didn't do this by myself. Every freaking day people helped me. I want to thank everyone."

Antetokounmpo might have had plenty of help in getting to this point, but with Milwaukee's championship aspirations on the line, it was Antetokounmpo who hoisted the Bucks -- and the more than 80,000 fans jammed both into and outside of Fiserv Forum -- onto his broad shoulders and carried them over the finish line.

On his way to equaling Hall of Famer Bob Pettit's record 50 points in a closeout game, Antetokounmpo scored 33 of his 50 points in the second half, leading Milwaukee back from a halftime deficit and simply refusing to allow the Bucks to let this opportunity slip away.

He repeatedly tore through Phoenix's defense and got to the rim time and again, and made one free throw after another -- eventually going 17-for-19 for the game -- after his issues at the line had become a story throughout these playoffs.

"People told me I cannot make free throws," Antetokounmpo said with a huge smile. "I made my free throws tonight and I'm a freaking champion.

"I made them when I'm supposed to make them."

Milwaukee had been the NBA's dominant team in the regular season in each of the past two years, only to fall short in the playoffs -- first in the Eastern Conference finals against the Toronto Raptors two years ago, then in the conference semifinals against the Miami Heat last year.

But both Antetokounmpo and the Bucks came back with a resolve to make sure things went differently this year. The team traded for Jrue Holiday before the season and P.J. Tucker during it. Coach Mike Budenholzer spent the season trying to prepare the team for the playoffs as best as possible, instead of trying to maximize their regular-season success.

And once the postseason arrived, the bumps and bruises and past failures the Bucks went through allowed them to overcome deficits in each of the final three series they played in -- including 2-0 deficits to both the Brooklyn Nets in the Eastern Conference semifinals and the Suns in this series -- before storming back to win.

They even overcame the hyperextension of Antetokounmpo's left knee -- an injury that happened exactly three weeks ago and, at the time, left the superstar forward thinking he would be out for a year.

Instead, he returned a week later and put together one of the most impressive NBA Finals performances of all time, averaging an astounding 35.2 points, 13.2 rebounds, 5.0 assists, 1.2 steals and 1.8 blocks per game in the series -- all while shooting 61.8% from the field.

"No, man," he said with a smile, when asked whether he ever could've imagined a moment like this when he began playing basketball in Athens all those years ago. "I started playing basketball just to help my family. Tried to get them out of the struggle, the challenges we were facing when we were kids.

"But I never thought I'm going to be 26 years old, with my team playing in the NBA Finals. Just playing -- like, I was just happy just being, like not even winning, just being a part of this, of this journey.

"But I never thought I would be sitting here with this right here and this right here," he added, pointing to the two trophies next to him. "We've come a long way."

He also was asked about what it means to him to represent the continent of Africa, as both of his parents are from Nigeria. He said he hoped his accomplishments could serve as a symbol to others of what is possible for anyone, no matter who you are or where you come from.

"Obviously, I represent my country, both countries, Nigeria and Greece," Antetokounmpo said. "A lot of kids from there. But not just from Nigeria -- all Africa and all Europe.

"I know I'm a role model. But this should make every person, every kid, anybody around the world believe in their dreams. No matter whatever you feel when you're down, when you don't think it's going to happen for you or you might not make it in your career -- might be basketball, might be anything -- just believe in what you're doing and keep working.

"Don't let nobody tell you what you can be and what you cannot do. ... Just believe, man. I hope I give people around the world, from Africa, from Europe, hope that it can be done. It can be done.

"Eight years ago, eight and a half years ago, when I came to the league, I didn't know where my next meal will come from. My mom was selling stuff in the street. Now I'm here sitting at the top of the top. I'm extremely blessed. I'm extremely blessed. If I never have a chance to sit on this table ever again, I'm fine with it. I'm fine with it. I hope this can give everybody around the world hope. I want them to believe in their dreams."

"It's been a long journey," he said. "I've done it all, man. I did anything that I could just to be on the court, just to be in this position. I've not played. I've come off the bench. When I was 18, I started on the team. I went to the front office and told them to send me to the G League. I've played point guard. I've only defended. Slashed from the corners and everything. In my fourth year, I was able to lead as a ball handler.

And now that he's won one title, Antetokounmpo said he's not satisfied with stopping now.

"This is the moments I want to chase. I want the team to build off this, and hopefully we can do it again."