Three-time NBA champ Dwyane Wade isn't intimidated by much -- but stripping down for the Body Issue wasn't easy. After his photo shoot, he sat down with ESPN's Morty Ain to talk about overcoming his body insecurities and what it takes to be successful in the NBA at 34. Here's Wade, in his own words:

To me, doing the Body Issue is bigger than looking at an athlete's body. It's more about the story we are telling of overcoming my fear of doing this. I had a fear of being naked in front of others and a fear of being judged. So to me, overcoming that is the biggest thing. Someone may look at me and think, "Why would you have insecurity?" Well, this is real life and I'm human, and these are the things that I deal with that many others might deal with. 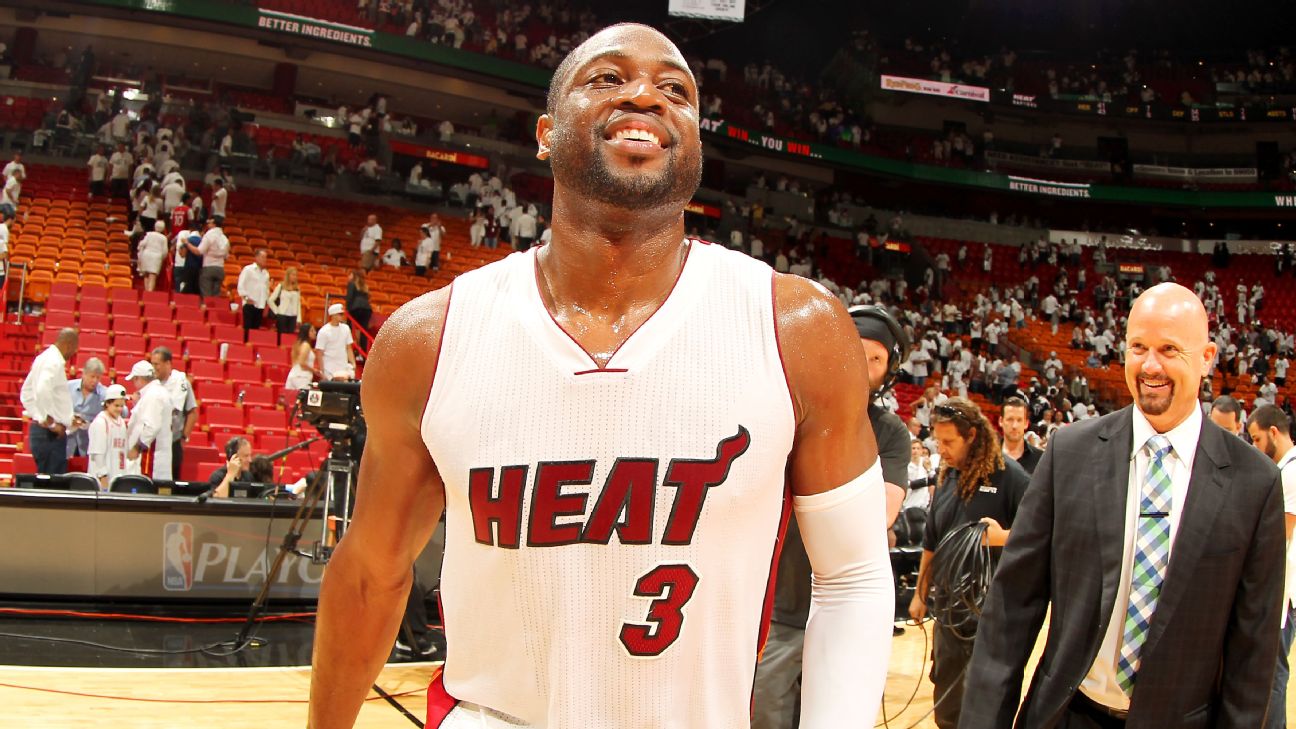 When I was young, my belly button was an outie, and I never even wanted to take my shirt off when we were at the swimming pool or outside during water fights. The only people who went into the pool with their shirts on were the kids who were overweight -- and me. I knew that I was different. I knew from all the kids I had seen that nobody else had what I had. No one else had an outie. Even when I got to high school, I didn't want to do swimming class because I didn't want people to see my feet -- as an athlete, my feet were a little rougher -- and my belly button. I had my doctor write me a note to say that I couldn't do swimming, and the first day I sat down and watched everybody else and it just looked so fun. I eventually was like, "I've got to do it, I got to do it."

I was just never comfortable until about four years ago, when I started feeling comfortable with my body overall. As you go through life, you get more comfortable with yourself. It's like everything else with life -- you change, you grow. People might think it's simple, but for me it was hard to even feel comfortable walking around naked when it's just me and my wife. So the thought of doing it at a photo shoot in front of people [laughs] -- it was like, "No way ever."

In my underwear line, Naked, we have this thing called the "Naked Truth" -- and my naked truth, I always say, is me being my authentic self. That became a part of me doing this shoot. I'm like, "You know what, nothing is clearer than this, being my authentic self." Right here is just me baring it all. This is as authentic as it gets. I always joke when I'm with people, "I'm always naked now" [laughs]. I'm always naked in my everyday life. That's because I either have on Naked underwear or no clothes at all.

I don't even view my belly button now. I make jokes sometimes when I'm doing an interview or taking a photo and I'll say, "I'm making the outies cool." I'm representing for all the kids out there who have the outies.

"I'M A FAT BOY AT HEART."
I work hard on my body, man. I'm 34 now; it doesn't come as easy as it did when I was 21, 22. I have to work at it now, where it used to be something that just came natural. Now I have to put in so many hours, but it makes me feel good to see the finished product. Like I said, being 34 but still being talked about -- to me, that's great, and it shows a lot about my hard work.

No one wants to do cardio -- I hate stuff like that, but it's got to be done. One thing we do is go outside and my trainer will make me chase him on a bike. When we work out in Miami, we just keep going around the block until he feels like I've had enough for that day. A lot of people saw me chasing him last summer. It's funny. I get people honking their horns, like, "Go, D-Wade!" It's kind of cool.

I'm always trying to stay lean because it shows more definition in my muscles. I try to make sure I have no love handles -- got to make sure of that -- and that I have low body fat. Because I can put on a few pounds pretty fast. I love to eat. I'm one of those guys who's low-key, but I'm a fat boy at heart, man, when I'm eating. To me that's kind of like my happy place: a great burger, fries and a soda. It's easy for me to pack pounds on, but it's easy for me to get them off at the same time.

"Right here is just me baring it all. This is as authentic as it gets." Dwyane Wade

So when I'm at the free throw line, I'm going through check marks in my mind: "OK, this is what I do every day at practice." I go back to a visual of me making free throws. The day before a game, I may make 48 out of 50, right? So in my mind, I'm watching myself make those free throws. I'm not thinking, "You know what, D, you're down one, going to the line with 1 second left." What I do, especially in the fourth quarter, I go back to the training in my mind. I remember one of the playoff games this year -- it was Game 4 against Toronto -- and I remember just how hard I had to push it in the fourth quarter and overtime. My trainer was there, and I was just looking at him and thinking about all the pain he was putting me through. And I'm like, "I haven't worked that hard to give up or to not be in better shape than this guy."

"WHAT HAVE I DONE TO DESERVE THIS?"
As an athlete, every part of your body deals with some kind of trauma. Whether it affects you at this moment or not, at some point, if you don't take care of your body the right way, it's going to expose itself. I've had toe injuries throughout the year where I could barely bend my toe. I've had dislocated fingers, I've dealt with blows where I thought I might have had a concussion, I've had back spasms. You deal with everything -- broken ribs, you deal with it all.

One of my worst injuries was when I tore my labrum and rotator cuff and I had to have shoulder surgery in 2007. That was tough. At the same time, I had knee surgery. Doing both at the same time -- where the whole left side of my body was messed up -- was tough. There are times when you just want to stop, you just want to quit because it hurts so much or because you don't even see improvements, and you're just like, "Forget it, forget it." You just have to continue to keep telling yourself these positive things to try to push yourself to get you to where you need to be.

From 2012 to 2014, those years were so hard for me. I felt like my body was betraying me -- out of nowhere, there was so much pain in my knee. Anytime I made a move, and I mean like a step or a walk, any move was painful. I remember just thinking at one point, "What have I done to deserve this?" This is something that's very important to my sport, my career and my future. And it got to a point where I was thinking, "Man, do I want to continue to feel all this pain?" I felt like my body was betraying me. It was every game, it was every day, literally. During drills in practice one day, I thought, "Nobody in this gym knows how much pain I'm in right now." It hurt to run, stop, plant, and it's killing me. But I didn't let people know. I didn't use no excuse. I just tried to do my therapy to fight through it.

"I FELT LIKE I WAS 28 THIS SEASON."
I'd say I probably felt like I was 28 this season. There were times when I did certain things and was like, "Man! That was like young me!" And then there were other times when I played my old-school game and played at my own pace. But overall, bodywise, I felt like I was about 28 this year. In the playoffs against Charlotte, I went coast-to-coast and dunked on a guy. I don't really dunk on other guys -- I don't even think about dunking on them -- but I went coast-to-coast and dunked on him. This was the playoffs -- I think it was Game 5 -- and I was like, "Oh, that's what I'm talking about! You still got it when you need it!"

I've always had an old-man game -- it's always been a part of me. But obviously when I was 21, 22, 23, I was just more athletic and faster. Now I have to use it more because it's an older game. It's just an understanding that, you know what, I'm not going to try to use my burst all the time because I'm playing against younger, quicker, athletic guys. I'll be playing into their hands if I do that.

I never envisioned that I would be playing this long. I think I always told myself that my body would tell me, "Hey, I gave you enough, it's time." So whenever my body tells me that, I'll listen to it and then I'll make that decision. But nah, I'm not there yet. I've got some good years left.