On April 26, Cavaliers power forward Kevin Love dislocated his shoulder while battling the Celtics' Kelly Olynyk for a rebound in the first round of the Eastern Conference playoffs -- an injury he alleged was intentionally inflicted by Olynyk. As part of Love's Body Issue appearance (on newsstands July 10), we spoke to the sidelined center about his body struggles, from being teased as a kid for being "doughy" to having to watch his team play without him in the NBA Finals.

ON HIS SHOULDER INJURY:

I was really looking forward to the playoffs. This injury is one of the hardest things I've dealt with. It was really tough to go out the way that I did. I knew when it happened I probably wasn't going to be able to return to play. But when I heard the news that I was going to have to get surgery, and be out for four to six months, it was a big, big blow to me.

Of course I was pissed. I was very emotional. And that was seen and heard, what I said [about Olynyk's allegedly dirty play]. I wanted to make this deep run with these guys and be out there on the floor. That was very tough, from a human aspect 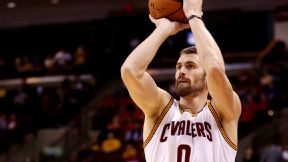 You don't want to have any bad blood; the NBA is an elite fraternity. As time went on, I was upset, but I always knew that I was going to get to the point where I could talk to Kelly and say, "Hey, man. All good." So we could move on. So I asked my agent to get me Kelly's number. And that was it, just a text exchange: "Just want to let you know, no hard feelings. It's all part of the game." It was very genuine. He told me he appreciated it. I didn't want him to worry about what anyone was saying these days. I expressed that I was initially very upset, which I thought was understandable. But I don't think he is that type of player. We're cool.

I lost a pretty good amount of weight after the injury, close to 15 pounds. I'm down to 238. But throughout my career, I've always looked at injuries as opportunities. No, the timing is never great. But I ask myself, "What can I do to better myself in the meantime, as far as basketball and my body?" You look at guys around the league and reassess.

ON HIS WEIGHT STRUGGLES:

Oh, you couldn't keep me out of the cupboards. Especially sixth through eighth grade, I was always very hungry. That's when I was growing. And my mom was a great cook; I was very spoiled when I was young. Her fettuccine alfredo? Yeah, you eat that on a regular basis and you're not gonna be in the Body Issue.

"You don't want to have any bad blood; the NBA is an elite fraternity." Kevin Love

I got teased, like any kid who was round and big would be. And coming out of college, I was, for lack of a better term, doughy. I was watching Charles Barkley when he was drafted in 1984 out of Auburn, he was the "Round Mound of Rebound." I was like that. I rebounded, and I was roundish. Well, maybe rounder is more appropriate.

You've heard the saying, "Some people live to eat, and some people eat to live"; I think you can figure out which one I was. But I always looked at it as an advantage on the court. I was using my weight, and learning to get my touch and my footwork. Then in high school, when I started to lift weights, I was able to take off. It's cool to see where my body has come from over the years. If you asked me to pose back then, that would have been a solid "No." A hard "No."

I'm not going to go any lower than my weight now. I know that I have to play inside; I have to contend with people who are bigger, faster, stronger than me. But I'm trying to add things to my game. I'm trying to be able to run faster and have fresh legs every day. I'm fit, and I'm focused.

Some guys just have those attributes that set them apart. The Kevin Durant body, where they're super long. Or giant hands like Kawhi Leonard. And at this level, I do think you have to have something that sets you apart. I would say that it's my wrist and forearm strength, which allows me to throw those outlets. Especially if I have a guy who can really run.

Fitness really clicked for me once I got into the league. I try to be cerebral about it. In college, you play two-three games a week, and that was it. In the league, sometimes you have four games in five nights. You play 82 games, maybe, plus USA Basketball in the summer. The travel is unprecedented. I was playing Tim Duncan in San Antonio one night and, like, Kevin Garnett and the Boston Celtics the next.

I'm a very routine-based person. I do yoga. During the season, the Cavs have us do Pilates. I like working out in sand -- there's nothing quite like it in terms of firing so many different muscles. I do resistance training. I have someone who helps me with nutrition. I have a chef in Cleveland. I check ingredients. Now I look at it as refueling.

At the end of the day, I want to play until I'm 40. And I would like it to be my choice. I 100 percent think that my best basketball is ahead of me.