Before he burst through those curtains in that dark suit and made the whole world freeze for a few spins, Magic Johnson had to be cornered by his agent for one important reminder.

Before he stepped up to the Great Western Forum microphone to give the sporting universe its very own Kennedy Moment, Magic startled Lon Rosen by telling him he was about to inform a global TV audience that he had the AIDS virus.

Minutes later, millions around the globe began to really process the distinction for the first time. Magic hoisted that mic to a suitable height, flashed the faintest of Magic smiles, then said some of the most enduring news-conference words that will ever be spoken: "Because of the HIV virus that I have attained, I will have to retire from the Lakers today."

So began the NBA's stop-the-presses answer to the assassination of President Kennedy, or President Nixon's resignation, or maybe the explosion of the Space Shuttle Challenger. So began what longtime Lakers PR director John Black refers to as "the biggest press conference in the history of sports."

"And it probably still is," Black said.

I know this much: It's the most unforgettable day I've ever had or will ever have doing this greatest of jobs. Where were you on Nov. 7, 1991? is a question you're going to hear often on this anniversary Monday, but you have to give me some time to unfurl my whole answer as one of the fortunate, frenzied hundreds who was lucky enough to be stuffed inside the famed Forum Club for the announcement itself. 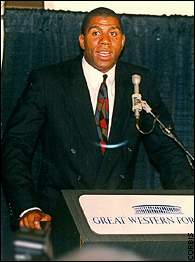 This was my first big NBA assignment as a 22-year-old punk reporter for the Los Angeles Daily News, nearly three years before I actually made it onto the NBA beat full-time. I had covered summer-league ball extensively to that point and a few Lakers-Warriors playoff games months earlier as a West Coast correspondent for the Washington Post, but all that was in college. Just six months after graduation, this was major league. And even the most well-traveled media vets had no career or life experiences to prepare them for this sort of press call.

"You can't even explain it," said Jim Hill, L.A.'s seen-it-all dean of sports broadcasters after a quarter-century with the local CBS and ABC affiliates following a career in the AFL and NFL as a cornerback.

"The silence in the room was deafening."

Said Golden State Warriors president Rick Welts, then the league's president of NBA properties and camped in the Manhattan office for a life-changing broadcast alongside dozens of league officials: "I can't imagine anyone who watched that day who doesn't remember it like yesterday. Because we didn't know then that there could be any good outcome."

The plan hatched by Rosen and Black to disseminate the unfathomable news actually called for the news conference to come a day later, giving Magic time to personally contact all the people close to him from various corners of the NBA map before the story leaked. And they figured they had one more day, given that the story of Magic's first positive HIV test had been kept quiet for nearly two weeks.

Through a second test to back up the results of the original HIV screening in late October, which came about as part of an extensive physical exam as required by a new life insurance policy, Magic was re-confirmed as a carrier of the HIV virus on Nov. 6, 1991. That was a Wednesday. On Thursday morning, before Magic could start making most of those calls, Rosen and the Lakers learned that local radio reporter Randy Kerdoon of KFWB knew what was happening and would soon be reporting that Johnson was about to walk away from the sport.

The madness that followed over the next few hours redefined the word. Reporters were warned to show up at least a couple hours before the start of the 3 p.m. gathering because seats were going to be scarcer than ever. That didn't stop reporters in different parts of the country, thinking they had time to get to L.A., from flying in to cover what Black calls "the most gigantic story ever"  only to be blocked at the door by Forum security. Local fire marshals cut the attendance off at a few hundred in a room that, as the shot atop this story illustrates, was never supposed to accommodate that many. Black received frantic calls at his desk from reporters trapped outside, but he couldn't have sneaked more in if he tried.

Don't forget that cell phones, convenient Internet access and even beepers were all still years away from widespread use. The limited amount of verifiable detail in circulation to advance the story in the hours after Kerdoon's original report only added to the mystery and panic spreading throughout Southern California. These 20 years might have zoomed by in many respects, but all you have to do is go to YouTube to illustrate just how different times were. We've found exactly one link to footage of Magic's 10 minutes at the lectern, undoubtedly transferred from someone's beat-up VHS tape of CNN's live coverage.

Covering a story of such seismic magnitude without the tools of today is even harder to picture. The L.A. Daily News fortunately had a fast-thinking sports editor named Rick Vacek, who not only dispatched a cast of more than a dozen reporters to Inglewood to smother the news conference from every angle but also took the unprecedented step of renting the biggest available suite in the Park Plaza Hotel across the street from the Forum. As soon as the presser ended, Team Daily News migrated from the Forum to the Park Plaza -- which wasn't even a fraction as swank as it sounds -- to turn that suite into our own satellite office. Which spared all of us from having to travel in rush-hour L.A. traffic before we started writing.

The youngster's assignment was a sidebar on David Stern, who in the midst of the NBA's daunting 128-day lockout sent a message reaffirming Sunday that he still regards the occasion of Magic's HIV announcement to be the toughest day in his 27 years as NBA commissioner.

All I could do, like pretty much everyone else in the mesmerized audience, was come away marveling at how Magic, even in the bleakest of times, was Magic.

As for me? All I could do, like pretty much everyone else in the mesmerized audience, was come away marveling at how Magic, even in the bleakest of times, was Magic. A jittery mortal like me handled the magnitude of the moment by spilling my entire tray of Park Plaza room-service food on the floor upon arrival after my LADN big brother Ken Daley had said, sure, go ahead and eat while you write. Watch the footage of Magic's address now and you'll see him quickly shift into point guard mode, calmly directing where all the various questions should go like Black would at an everyday press briefing, leaving the distinct impression that he was worried about everyone else in the room except for the guy who had just been hit with what we all thought at the time was a death sentence.

Magic joked about moving into Jerry Buss' office as soon as the owner moved out and looked right into that camera and vowed to "beat it" and "have fun," as if confronting HIV was no different than the NBA Finals.

"There are two things I will never forget from that day," Lakers exec Jeanie Buss said. "First is how brave Magic was. Everyone else was shattered and he held it together  he didn't show any fear. The other thing is that I'd only seen my dad cry once before [when his mother died]. That day was the second time."

Even the chilliest media types were unavoidably prone to get emotionally attached to Magic, who could charm you like few athletes ever have. As for those comparatively primitive tools we had in our possession back then, that might have been the closest thing to a break he was catching here when you think about the Twitter and camera phone stalking he'd have to put up with if all of this unfolded now. Back in 1991, Magic's medical records were hidden under an assumed name. He even flew to Hawaii days after the news conference under a fake name. The paparazzi wasn't what it is nowadays, either, so he only had to deal with one intrepid photographer from the National Enquirer hiding in the bushes in Maui, where Magic and wife Cookie went on a retreat after he followed up the news conference by sitting down for a brief circuit of one-on-ones with Arsenio Hall, Sports Illustrated's Roy Johnson and Hill.

"I remember people who went through my trash trying to find something when they couldn't get to Earvin," Rosen said. "I had people offering me money for interviews. But it wasn't like the feeding frenzy we'd see today. It gave him a little bit of peace."

And Nov. 7, 1991, gave one lucky kid reporter an introduction to the NBA that no one in Hollywood could have dreamed up. I squeezed into the Forum Club scrum near the door that afternoon thinking I had to come to see the beginning of Earvin "Magic" Johnson's slow deterioration to tragic expiration  only to find myself back in the same spot less than five years later for a Forum Club lunch with a very, very alive-and-dishing legend.

In January 1996, Magic was back on the floor with the Lakers, finally going ahead with one more shot after a half-decade of second-guessing himself about retiring too soon. And one of his first acts as the Lakers' new point forward -- Magic Mountain, we called him -- was to tell Black to round up then-L.A. Times beat writer Scott Howard-Cooper (now at NBA.com) along with the Daily News guy (me) for a meal. Magic wanted to let Coop and I know that, amid all the inevitable hoopla that would greet his comeback everywhere we went, he'd always make time for us because we were the traveling Laker beat writers.

You can't make this stuff up.

But that's Magic. That's the one-of-a-kind pleaser so aptly described in Sunday's New York Times by Harvey Araton as "the most positive force of energy to ever hit professional basketball."

Even on his darkest day.

Before and even after HIV, Magic was always feedin' you. Whether you played on his teams or just covered them.