Did you know?
The NBA's all-time leader in MVP awards, points and Win Shares. Abdul-Jabbar owns three of the top six seasons of all time in terms of Win Shares, including his 1971-72 season in which he averaged 34.8 points and 16.6 rebounds. Even if you counted only his six seasons before joining the Lakers, Abdul-Jabbar would still rank among the top 50 in NBA history in Win Shares. -- ESPN Stats & Info

The Cap's career second to none

A case for anyone other than Kareem Abdul-Jabbar as the greatest player of all time should be forced to start with a case against The Captain. His credentials are unassailable. He won as many championships as Michael Jordan, and scored more points and earned more Most Valuable Player awards than anyone else in NBA history. How, exactly, does that not equate to best?

The only thing Kareem couldn't do was captivate. While Jordan seemed to pull off the impossible, Abdul-Jabbar made scoring seem inevitable. The how and the who matters in the NBA as much as the what, and Abdul-Jabbar's skyhook was the least suspenseful shot in the league. You knew it was going in.

Abdul-Jabbar linked his game to jazz, going so far as to name his autobiography after the John Coltrane album "Giant Steps." Jazz is the oldest and most distinctive musical form to originate in America. It's also the most underappreciated, invisible at times in pop culture. Abdul-Jabbar finds himself relegated to a similar corner.

We don't give Abdul-Jabbar enough credit for his activism in the 1960s, as we have retroactively with Muhammad Ali. Nor do we allow his thoughtful essays on politics and culture these past few years to serve as a reflection on how he nourished his mind while dominating in sports. We don't marvel at his sustained excellence, which allowed him to average 23 points per game even as a 38-year-old in his 17th NBA season.

Others might rank ahead of Abdul-Jabbar, yet it's hard to say his career has ever been surpassed. 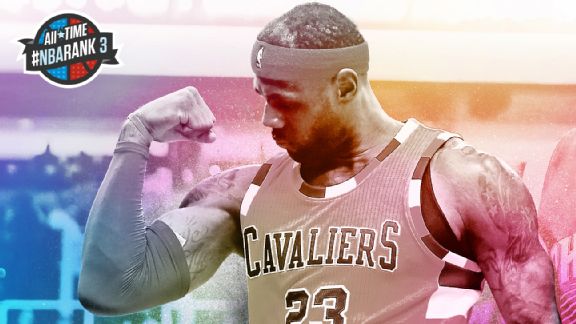