Nickname
King James, The Chosen One

Did you know?
LeBron James and Michael Jordan are the only players in NBA history with four seasons of having a PER of 30 or higher. LeBron's performance in the 2015 NBA Finals will go down as one of the best of all time as he became the first player in NBA Finals history to lead all players -- from both teams -- in points, rebounds and assists. He scored or assisted on 57.7 points per game, the most by any player in NBA Finals history. -- ESPN Stats & Information

No one has ever had as much hype as James has had to live up to, and James has delivered on every last drop.

The expectations and pressures on James as an 18-year-old were unparalleled: his Sports Illustrated cover, his $100 million Nike contract signed while he was still in high school, his nationally televised high school games, the documentary made about his high school years that played nationally in movie theaters, the 13,000 people at his first summer league game, his prime-time debut in his first NBA game.

So many of the overexposed teenagers in the preps-to-pros era squinted when the big spotlight arrived. Even the best needed more seasoning. Not James. His game was raw in areas, he was overwhelmed by the venom some of his peers had for him and maybe he pouted a little too easily, but oh did he impress. He has been worth not only the attention but the growing price of admission.

He later became the first superstar to have to navigate the social media age, and he rode it to become one of the most famous athletes in the world.

Nitpick his game, mock his receding headband, criticize his free-agency choices, start comparing rings. But never before had the game seen a teenager like him. By the time he was in his mid-20s he was no longer chasing opponents but chasing ghosts, the greats who'd come before.

Now he's trying to end a 50-year-old title drought for a city where he's one of the most treasured residents in its two centuries of existence.

Go ahead and rank that. 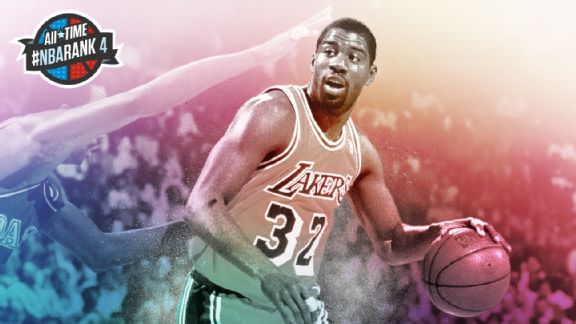