To create All-Time #NBArank, we put together a ballot with the 150 greatest players ever. Then our ESPN expert panel voted on thousands of head-to-head matchups, with voting based on both peak performance and career value. The result is our all-time NBA Top 100.

Did you know?
At his best on the biggest stage, Magic Johnson is the only player in NBA Finals history with multiple triple-doubles in series-clinching games. He averaged 12 assists per game in the NBA Finals six times. No other player has accomplished that even once. -- ESPN Stats & Info

At least once a year, usually on Magic Johnson's birthday, I tweet out a link to a YouTube video titled "The Magic Man".

It's a 15-minute, 22-second mix of highlights culled from his career. There's no music, no visual effects. Just the plays and the original calls by the announcers, most of them provided by legendary Lakers broadcaster Chick Hearn. It captures not only Magic's abilities but his flair. This was a man who recognized the audience needed entertainment as much as he craved competition. The most amazing part of the entire video: You don't see Magic Johnson take a shot until a clip that begins at the 7:17 mark. Who else could hold your attention for more than seven minutes of dribbling and passing? Only the Magic Man. He not only made sharing cool, he made it stylish.

It's reflective of the way he could dominate games offensively without scoring. There were times when he was in such command, so aware of who should get the ball and where they should get it, that he could orchestrate the offense without even crossing the 3-point line.

Magic won the 1982 NBA Finals MVP award while averaging 16.2 points in the series, the lowest output by a Finals MVP in the 3-point shot era. That's not an indictment, it's a tribute. Magic realized there were so many ways to contribute besides scoring, and he could find any possible avenue to victory. He even led the league in steals per game twice. Of course, he could put the ball through the basket when he had to. Ask all the fans in Boston Garden whose hearts he broke with the Junior Sky Hook. It was still his passing and game-flow control that made him the best point guard ever, though.

We forget how young Magic was when he announced his retirement in 1991 after learning he had HIV. He had just turned 32 a couple of months earlier. The Lakers had slowed down from the Showtime era, but he still quarterbacked them into the NBA Finals the previous season. He had a few thousand assists left in him, maybe enough to allow him to remain the all-time leader instead of sitting in his current fifth place.

One thing his premature retirement kept intact: He never missed the NBA Finals in back-to-back seasons. The game's greatest showman always found a way to return to its biggest stage. 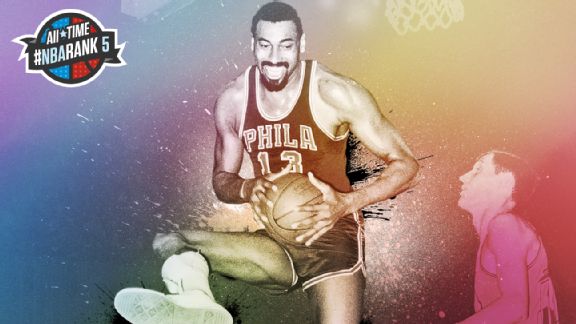