Nickname(s)
Shaq, Diesel, The Big Aristotle, Most Dominant Ever, Superman

Shaq's greatness? We can dig it

On that score, Shaquille O'Neal runs pretty much unopposed in the NBA's pantheon of all-time great centers.

Shaq often proclaimed himself "The MDE" -- and so many other things. He introduced too many nicknames to count over the years because, frankly, who was going to tell the big man he couldn't? But it was all part of a package and a natural instinct to entertain that we'd never seen in pro basketball ... at least not from a 7-footer who had the ability to do the sort of damage we associate with the likes of Wilt and Kareem.

Maybe nothing rang more true with Shaquille Rashaun O'Neal than one of the first things I remember hearing him say upon his arrival in Los Angeles in the summer of 1996: "You've never met anyone like me."

Almost everything about Shaq and his game was outrageous: his sheer size, his rim-bending strength, his agility at that size and, of course, his capacity to deliver delicious drama for nearly a decade as the mischievous half of a roller-coaster hoops marriage to Kobe Bryant.

At his absolute peak, in Year 1 under Phil Jackson, Shaq came within one vote of becoming the first unanimous Most Valuable Player in league history. ‎Yet Shaq also had a knack, as larger than life as he was, to leave you wanting more.

What if he stayed in Orlando with Penny Hardaway or made it work with Kobe for longer? What if he kept himself in better shape? What if he feuded less, made more free throws and chased rebounds harder?

Yet for all of those justifiably nagging questions, O'Neal is the game's seventh all-time leading scorer and owns four championship rings. It's not the largest haul in history, but it's sufficiently Shaq-sized -- and plenty dominant -- to put him up there with the other legends of the game. 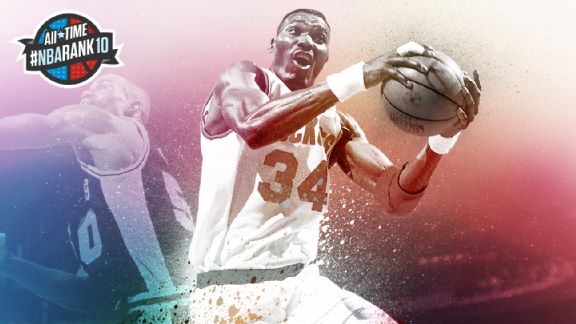