Members of our #NBArank panel are recounting the greatest NBA Finals games. First we asked five NBA writers to share their favorites. Then, Kevin Pelton started ranking his top 25 Finals games of all time, unveiling five per day.

Chris Broussard: I'll never forget the sight of Magic Johnson jumping center against Philadelphia's Caldwell Jones to start Game 6 of the 1980 NBA Finals. Magic lost the tip, but that was about the only thing he didn't conquer that night.

He sank a skyhook, made acrobatic layups, dunked on opponents, led the fast break, hit jump shots (well, set shots), made all 14 of his free throws, and scored 9 points in the final 5 minutes to turn a 2-point lead into a comfortable double-digit victory. 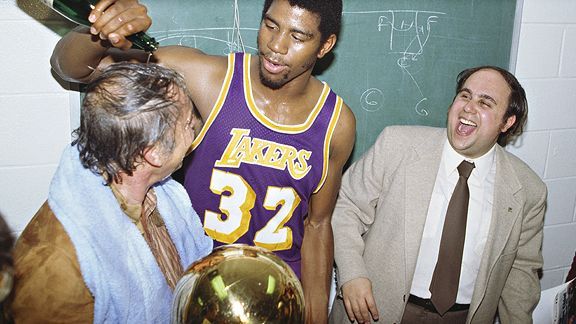 As a Magic Johnson superfan, I was in awe. This was a year after I stunned -- and upset -- my friends at my Catholic grade school in Indianapolis by telling them I was rooting for Magic and Michigan State over Larry Bird and Indiana State in the NCAA Championship Game.

So when the Game 6 broadcast started at 10:30 p.m. Central Time (yes, the NBA Finals were still on tape delay then), my eyes were glued to my black-and-white TV. My younger brother had long since fallen asleep. My dad was at a friend's house watching the game. Mom? Well, she couldn't care less.

There was no one to share the moment with. But I didn't need anyone; I knew I was watching history.

A 20-year-old rookie point guard scores 42 points, grabs 15 rebounds, hands out 7 assists and makes 3 steals while playing center, forward and guard? On the biggest basketball stage there is? Against an icon and one of his personal heroes, Dr. J? On the road?

He becomes the only rookie ever to be named Finals MVP, a feat that may be nearly as unapproachable as Wilt Chamberlain's 100-point game?

It has to be the greatest single-game performance in NBA history.

Our #NBArank panel is recounting the greatest Finals games ever, culminating in Kevin Pelton's list of the all-time top 25.

Can you imagine if a player did that nowadays? One year removed from winning a national title, a rookie outplays, say, LeBron James, to clinch an NBA championship?

In the age of 24/7 sports talk radio, sports talk TV, and sports talk Twitter, he'd immediately be declared the GOAT, or at least on his way to becoming that.

But relatively speaking, the hype surrounding Magic's masterpiece was kind of quiet. His subsequent championships and achievements would receive much more attention.

If you want to get involved in the discussion or just follow along, #NBArank is the Twitter hashtag to use. You also can follow along with @ESPNNBA as we count down the greatest Finals games ever.