HONOLULU -- Although coach Phil Jackson plans to reinstitute his much-beloved triangle offense with his return to the Lakers' bench, the most noticeable change in the team this season will be its defense.

The Lakers are fully committed to actually playing some.

What effect that dedication has on last season's fourth-worst scoring defense, with a roster currently boasting Wafers and Smushes and Bobbitts, remains to be seen. But if the Lakers are as adept at protecting the hoop as they are the relationship between Kobe and Phil, then consider them a lock to make the playoffs.

With Jackson doing everything from rewriting the just-released paperback version of his book, "The Last Season" -- according to a Lakers beat writer who snagged a copy -- to saying he returned, in part, to save Kobe Bryant from unfair criticism, the Zen Master is building a moat of good will around his new buddy. If initial reports are accurate, Jackson should have renamed the paperback, "What I Meant to Say Was ..." 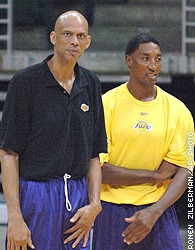 In any case, Bryant is meeting him halfway, saying Monday at the Lakers' media day that he "forgave" Phil and adding Tuesday that he relishes working again "with one of the greatest coaches of all time. Ultimately, we've been through so many battles, most successfully, there's an inner respect there."

No matter what they say, they are sure to be asked for updates at every turn. Chip Schaefer, the Lakers' athletic performance director -- that, apparently, is what you call a former athletic trainer who is still on the staff and carries a clipboard but doesn't tape ankles -- joked that the reporters walking in for post-practice interviews looked like the cast from "Reservoir Dogs." He wasn't that far off. One of the first questions fired at Jackson by a Honolulu TV reporter: "So is Kobe Bryant coachable?"

Jackson laughed. "I don't know, I didn't talk to him specifically," he said. "But his team is the one that won the first drill out there."

That, of course, could be extrapolated into a tremendous New York Post-style headline: Phil Not Talking to Kobe! And somewhere along the line, if it all remains this sedate, it probably will be. For now, though, the beating that each of them has taken and the absence of expectation has created an -- dare I say it -- upbeat mood among the purple-and-gold. Everyone, from Kobe and Phil on down thoughtfully answered any and all questions through the first two days. It doesn't sound like much, but considering how haughty the team started two years ago with the Kobe-Shaq-Payton-Malone foursome and how off-kilter everyone seemed last year between Rudy Tomjanovich's free-wheeling system and the weight-of-the-world aura around Kobe, the Lakers are almost enjoyable to be around.

"This, without question, is the best it's been in years," said longtime L.A. sportscaster Jim Hill.

The mood tightens with the first practice, but the hunger is evident. Jackson has decided to focus on defense, with plans to apply full-court pressure as much as possible. That's the cure for a team that doesn't have enough solid one-on-one defenders or great shotblocking -- make the opposing offense eat up clock getting into its sets. It requires precise execution, though, which is why Jackson stops after every mistake and calls for a do-over.

"Two-thirds of the practice was defensive mechanics," Lakers center Chris Mihm said. "I just haven't seen that in a while in this league. It's going to create accountability and intensity. I already know this is going to be the most valuable training camp I've ever had."

The oddest part is how star-free the roster is and how that had absolutely no impact on the promotional blitz of Monday's media day. With six TV backdrops and the recumbent lights and cameras, the Lakers' El Segundo practice floor looked like a movie set.

In one corner, Sasha Vujacic was being told by a TV producer to look down "and then when I say, look up, but don't smile." Next to him, rookie guard Will Conroy was holding the ball out as if frozen in mid-dribble on a slowly rotating platform. Next to him, Smush Parker said into a camera: "Be a healthy kid. Eat right and exercise. I did!" Another rookie guard, Von Wafer, peered into another camera and said: "Happy holidays from the Lakers and FSN West!" On the other side of the gym, Luke Walton was being spoon-fed a paragraph of Spanish: "Todos Los Partidos . . ."

Aaron McKie, an 11-year veteran, had never seen anything like it. "This is like theatrics," he said. "They've got me reading things. I'm a basketball player, not an entertainer. But I guess this is L.A."

It's what made Rudy T's switch to an up-tempo style so attractive last season. The Lakers were barely above .500 before his health forced him to resign, but every night was an entertaining roller-coaster. Jackson's style will be a lot less flashy and, combined with few stars, it remains to be seen if Hollywood will pay Staples Center prices for that kind of product.

The no-nameness of these Lakers is underscored at the first practice session by the Hall-of-Fameness of the extended coaching staff. While Laron Profit is dribbling into trouble against a full-court trap and Tony Bobbitt -- I believe it was Bobbitt, anyway -- is turning the ball over in the backcourt, Scottie Pippen, Kareem Abdul-Jabbar and Craig Hodges (3-point contest record holder and championship-ring bearer) watch from the sidelines. Even James Worthy, officially here as a member of the media (L.A. TV), gets into the act, showing Kobe several post moves.

McKie, who went to the 2001 Finals as part of a relatively anonymous 76ers' crew surrounding Allen Iverson, doesn't believe the number of stars determines a team's potential -- effort and cohesiveness do.

"It's going to be tough for us, an uphill battle," he says. "But if we work hard and defend every night, it's going to be a lot better than anyone expects."

That's not the kind of trailer that gets Brangelina or Bennifer II sitting courtside. Then again, maybe the Lakers are taking a break from the Spago life and going Esalen Institute on us for a while. If nothing else, it's a refreshing change.

At least Will Conroy and Von Wafer seem to think so.

Ric Bucher covers the NBA for ESPN The Magazine and collaborated with Rockets center Yao Ming on "Yao: A Life In Two Worlds," published by Miramax. Click here to send him a question for possible use on ESPNEWS.