DEERFIELD, Ill. -- First and foremost, it was the money that brought Ben Wallace to the Chicago Bulls. They were offering a starting salary of $16 million -- more than $4 million more than what the Detroit Pistons were offering -- and the bottom line, we all know, is that money talks.

But there was another factor, too, one that Wallace had kept pent up until now, that made his decision an easier one. 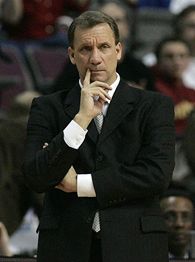 He did not like coach Flip Saunders, not one bit. And the fury he felt toward his former coach after sitting out the final 12 minutes of Detroit's final playoff game last season stuck with him through June and into July -- a month that began with Bulls general manager John Paxson and coach Scott Skiles ringing his doorbell on the afternoon of the July 1, coming into his home and making a three-hour pitch to Wallace and his then-pregnant wife, Chanda.

A considerable amount of trepidation was rattling around inside Paxson's head that afternoon when he first walked in the door, but the feeling he exited with three hours later was somewhat hopeful. "I didn't know how realistic it was. I think all of us thought it would be very difficult to get Ben out of Detroit, though we saw there might be a crack in the door just from reading stuff," Paxson said.

There had been an episode in Orlando late in the season when Wallace refused to re-enter a game, and then there was Game 6 in Miami and the quotes from Wallace afterward that indicated all was not quite so hunky-dory over on the other side of Lake Michigan.

"The bottom line is we had the money, and we sold him on Scott being a no-nonsense guy who comes to work every day. We didn't have an agenda other than that, but we thought maybe there was a part of Ben that said maybe it's time to change teams one last time and see if I can't do something great somewhere else. We saw there was something [in Detroit] that he wasn't as thrilled about as he had been in the past, but I honestly didn't think we had much of a shot," Paxson told Insider from inside the second-floor office he inherited from predecessor Jerry Krause overlooking the court at the Bulls' suburban practice facility.

What the Bulls did have was a bevy of cap space, enabling them to offer Wallace much, much more than the Pistons were willing to pay. The starting salary of $16 million should end up being the most money Wallace ever makes in an NBA season, as his contract decreases to $15.5 million next season, $14.5 million in 2008-09 and $14 million in '09-10. Still, it all added up to $60 million, which was $8 million higher in total dollars than the Pistons indicated they were willing to go.

In a league in which making money is the bottom line, the decision started to become more and more of a no-brainer for Wallace the more he discussed it -- even though he was the No. 1 fan favorite in Detroit, a player whose name was called last in pregame introductions, a player who embodied the work ethic that the Pistons had always maintained was one of the main keys to their success, a player who might have even had his number retired if he had finished his career in Motown.

"I weighed all the pros and cons. One thing that really made me comfortable about coming here wasn't anything Pax or Scott did, it was that those guys I played with in Detroit, great guys, great teammates and great friends, it was like we were all in there negotiating together," Wallace said. "My agent talked to Pax, then came back and talked to me. And after we finished talking I hung up the phone and called Chauncey, ran the scenario by him, called Rip, Rasheed, Lindsey, Tayshaun, those guys. So it wasn't like I was making the decision on my own. I talked to those guys, and they all told me we would love to be selfish and tell you we need you to come back so we can make this run again, but they said this seems like an ideal situation with a team that reminded them of us when we won the championship. They said, 'It sounds like the best situation for you, and we can't blame you if you take it,'" Wallace said. 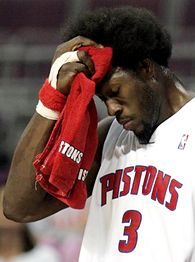 So Wallace took it, putting his six years in Detroit -- along with a coach he had no use for -- in his rearview mirror.

He had been stewing over his benching in Game 6 in Miami, and he skipped his exit interview with Saunders back in Auburn Hills, opting instead to speak only with team president Joe Dumars.

"At that point in time, the frustration was still sitting heavy on me, so there wasn't no need for me to have a conversation with Flip at all," Wallace recalled. "I thought the worst thing he can do to a player who's been there and been in the fight with you all season was to put me on that bench and force me to watch that whole fourth quarter and not have an opportunity to get in there and see the action. That was the toughest 12 minutes I ever had to play -- or ever had to watch. It sticks with me, it's still with me."

I interviewed Wallace that night in Miami after Game 6, concluding he was more apt to leave than stay after hearing him say: "Everyone knows where my heart is. It's in my chest." Wallace hinted at how livid he was over being benched for the fourth quarter, but held his tongue for the most part and never ripped Saunders by name.

Fast-forward to this past Wednesday evening following the Bulls' nightcap of two-a-day practices, and Wallace finally decided to open up to ESPN.com.

"No. I just didn't like the way we handled things," Wallace said. "We got away from our bread and butter, and that's on the defensive end. I hear him saying now that I'm gone he can open up his playbook. I laugh at it. Everyone's looking for something, and for him to say that, he's fishing for getting a reaction out of me. It's funny to me, real comical. I never thought you could win when you've got five guys on the floor looking for the ball and no one out there doing the little things. So that's on him. If he feels like that, go ahead."

Wallace mentioned Jim Lynam, Doc Rivers, Rick Carlisle and Larry Brown as the favorite coaches he has played for, going on to say Skiles reminds him of Brown because he does not play favorites and sees himself as a teacher at both ends of the floor.

"I have no relationship with him. He's coach and I'm a player, and that's as far as it went. If you say your door is always open and we can always talk about things and you'll be willing to listen, and when I come to him to talk about something that's bothering me that I think is hurting the team, if you don't do anything to change it, then that's the last time I need to talk to you."

That time came early in the season when the Pistons were reeling off wins and beginning to set their sights on making a run at 70 victories, a number they'd eventually fall six wins short of.

"We weren't playing as hard as we could on defense. We had to grind it out when we should have been up and comfortable, giving other guys a chance to get some reps. But for the most part we had to fight. I just told him the way we were playing defense then, we didn't have a whole lot of defensive principles. We were just out there playing on natural ability, and we needed to put some type of system in place we were going to come out every night and use, instead of trying to feel our way through it," Wallace said. "He said: 'OK, I understand what you said.' But he never changed."

"Carlisle was cool. He's one of those coaches who said his door was open and you went to talk to him, if he didn't believe in what you said, he'd tell you and say, 'I'm not going to do it that way, it won't work.' You can't do nothing but respect that," Wallace said. "And coach Brown wasn't afraid to go out there and run a play for you, and if you did well on it he was going to keep coming to you."

Saunders also spoke to Insider, taking issue with Wallace's recollection of their meeting.

"We had opened 8-0 and we were just back after losing in Utah. We talked more about what he was doing offensively," Saunders said. "As far as Game 6, I'm probably as frustrated as him; we weren't scoring, and I was trying to get some offensive firepower."

Saunders did not run many plays for Wallace, and his scoring average sank from 9.7 points in his final season under Brown to 7.2 in his lone season under Saunders. Wallace did pick up his fourth Defensive Player of the Year award, but his rebounding average (11.3) dropped for the third consecutive season, and his blocked shot average (2.21) fell for the fourth straight year. Numbers such as those have caused many to say the Bulls overpaid for a 32-year-old center already on the decline, but while Paxson will allow that the Bulls did overspend (because they had to), he feels the perception that Wallace is in decline will inspire his big free-agent pickup.

Chicago is coming off its second straight first-round ouster in the playoffs, but last season was a throwaway year after the Bulls decided to trade Eddy Curry (and Antonio Davis) at the start of training camp, sacrificing their only low-post scoring threats along with a respected veteran whose leadership capabilities were not replaced. By bringing in Wallace and P.J. Brown, two players whose leadership comes from setting an example through their practice habits and game efforts, some of those missing elements have been replenished.

When the Bulls open the season Halloween night in Miami, Wallace will be back at the same locker where he sat so wounded and angry in June after what turned out to be his final game in a Detroit uniform. But he'll be wearing Bulls colors this time, red and black, and he'll be starting a new chapter in a career that has taken him from being an undrafted nobody to possibly becoming the biggest impact free agent since Steve Nash left Dallas for Phoenix.

And when the final 12 minutes roll around, Wallace hopes Saunders is watching somewhere on TV, taking note that Wallace will be spending this fourth quarter on the floor instead of the bench.

"From here on out, I'm going to remember that 12 minutes on that bench," he said. "I had been there through thick and thin with those guys, and I hated to watch my teammates out there put up a fight and there was nothing I could do to help them. It was like the big brother scenario, seeing someone pick on your little brother or sister and you can't do nothing about it.

"It was a helpless feeling, man. Things were going the way they were going, and there was nothing I could do to change it."

So Wallace decided to change what he could.

Mostly it was about the money. But it was also about Saunders.

And that, folks, is why Wallace is a Bull.