BOSTON -- The happiest place in all of the NBA Wednesday night may very well have been the visiting locker room at the TD Banknorth Garden, where the only undefeated team remaining in the Eastern Conference was celebrating -- modestly, mind you, but celebrating nonetheless -- their seventh straight win.

It's quite a gaudy record the Toronto Raptors are sporting as the preseason winds down, a 7-0 mark that left one team official joking that he was heading out in the morning to get sized for a championship ring.

"Our goal is to go 90-0," said guard Fred Jones, one of nine new players brought in by new team president Bryan Colangelo in an effort to reverse the fortunes of one of the league's biggest sad sack franchises over the past two seasons, a team only now starting to truly get over the post-Vince Carter era hangover. 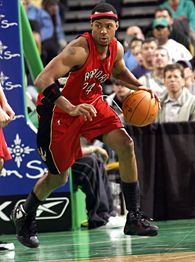 He's been around the league long enough to know that preseason games are next to meaningless, but Jones has nonetheless bought into the pitch coach Sam Mitchell made at the start of training camp.

"When we came to camp, we said it was going to be a 90-game regular season, and then hopefully the playoffs after that," Mitchell said. "And when I talk to my team after the Chicago game (to wrap up the preseason Friday night), it's going to be, 'Who we got next.' It's not going to be, 'Now that the preseason is over ... .' "

Mitchell decided to put extra focus on the eight preseason games after recalling how a lackluster preseason slate a year ago set the tone for the way the Raptors started off the season, losing 15 of their first 16 games to all but fall out of contention before the second month of the season had even begun.

But last year's team had a training camp roster than included veterans Jalen Rose, Eric Williams, Mike James, Aaron Williams and Alvin Williams, and if Mitchell had told them to put regular-season effort into the exhibition schedule, they would have laughed him out of the room.

"We had different kinds of guys. I can tell Jalen Rose it's going to be 90 games, but in Jalen's mind it's preseason, because he's been through it for so many years. But none of these guys in the locker room have been through it except Mo Peterson (and Rasho Nesterovic), and everybody else has got what, three years or less? So I got to use some new stuff."

With the players buying into the 90-game mindset, the Raptors have been the most surprising success of the preseason aside from Don Nelson's Golden State Warriors, who at 6-0 are the league's only other team with an unblemished record. Mitchell said what's he's really trying to do is boost his team's confidence level, and it showed down the stretch after Toronto blew a 13-point fourth-quarter lead and let Boston go ahead.

But in the final minute, it was the Raptors who showed enough confidence and poise to keep their perfect record intact. After he grabbed an offensive rebound, Nesterovic converted a 10-footer over Michael Olowokandi to tie the game at 101. The Celtics rushed their next possession, and Sebastian Telfair missed a jumper from the corner. Jose Calderon drove hard to the bucket and was fouled by Olowokandi, making both free throws to break the game's final tie. Boston's next possession was even more rag-tag than the previous one, and Wally Szczerbiak had to hoist an off-balance bank shot attempt from 18 feet after getting caught off his feet. Calderon's two free throws with 5.6 seconds left clinched the victory.

Making this win even more impressive was the fact that Toronto did it without its two best players, Chris Bosh (sore heel) and T.J. Ford (sore hamstring). Peterson had his best game of the preseason with 21 points, Calderon had 19 points and seven assists while logging 32 minutes, and Jones went 3-for-3 from 3-point range. The Raptors also got solid efforts from Kris Humphries (13 points and seven rebounds starting for Bosh), Jorge Garbajosa (six points, six rebounds) and Joey Graham (nine points, four rebounds) in showing off some of the depth Colangelo has added to the roster, including overall No. 1 draft pick Andrea Bargnani (averaging 10.2 points but shooting a shade less than 40 percent in the preseason).

So the record looks great, the players feel good, and the atmosphere in the locker room is light years away from what it was 12 months ago. But is 7-0 an accurate reflection of what kind of a team the Raptors are?

"It's real accurate. Stats don't lie," Bosh said. "If we take the preseason seriously and try to win every game, then when the regular season comes we'll have that winning feeling."

They certainly have that feeling now.