DENTON, Texas -- You head north out of Dallas, drive through an old college town affectionately known as Little D and finally wind your way onto campus some 45 miles later, expecting to find Camp Heartbreak.

What you find instead is Mavericks guard Jason Terry, upbeat as always, confronting his team's NBA Finals unraveling in the only manner he knows. 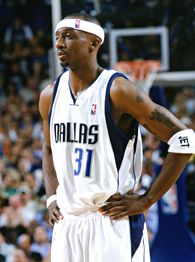 Pulling up his new socks, that is.

"I got tons of these socks. The Finals are always on me, always on mind, everywhere I go. I wear these just to remind me of what's at stake."

This being the quirky Terry, you believe him. This is a guy who wears five pairs of socks inside his sneaks every game. So you don't doubt that Terry is too excited about the new acrylic on his feet to be haunted by Finals nightmares or burdened by the weight of his new $58 million contract.

This being October, firm conclusions are risky. The obvious disclaimer here is that, even though visitors to the Mavericks' training camp have struggled to identify traces of a playoff hangover, it's still early. We won't really know how Terry and the rest of Dirk Nowitzki's Mavs respond to those four straight losses to Miami until playoffs start in the spring, which is ages away.

"I still go through it in my head," Nowitzki said. "One of my last nights in Germany [last month], I was trying to go to sleep, but I couldn't. I was thinking about the free throw I missed [late in Game 3], about different situations that happened in that series. I'll never forget it. It's going to stay in my mind until we win it all."

Said Mavs coach Avery Johnson: "I see a lot of experience on this team, lots of depth. This is a different team, but a little older, maybe a little wiser.

"We'll see if we're good enough. Experience is a great teacher. But we've got a lot of unanswered questions."

The list isn't that long, actually, but there are more than one or two unknowns. Can the Mavs even get out of the brutal West again? Can they maintain their newfound status as Texas champions in the roughest state on the NBA map? Can they hold off the Spurs and Rockets just to win their division? Can they relocate the poise that, before it went missing against Miami, won them a Game 7 on the Spurs' floor? Can they finally admit to themselves, after all their complaining in the Finals, that they squandered a 2-0 series lead and a 13-point edge late in Game 3 because they weren't ready to win it all?

As Johnson says, we'll see. We'll see, for starters, how the Mavs handle an 82-game slog just to get to the point where they can answer a lot of those doubts.

"I was just looking at it," said Mavs swingman Jerry Stackhouse, who's entering his 12th season. "I was counting the months. Where we started the other day, it's seven months before the fun part even starts. In seven months, that's the end of April. So this is a tough time right now. We've got a grind in front of us. But that's the NBA season. We've all done it before, and I've done it a little bit more than the others. 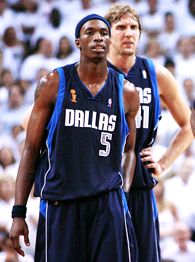 "We know we can't breeze through the season. There's nothing automatic about it. We've seen it before. A team like Minnesota, they make the Western Conference finals and didn't even make the playoffs [for the past two seasons]. We feel like we're better than that, but we definitely don't want to take our situation for granted."

That's why Johnson has hit the Mavs with a series of short-term goals to focus on before they even get to the playoffs. Getting off to a good start is priority No. 1. Winning the Southwest Division is No. 2. Securing the No. 1 seed and home-court advantage throughout the West playoffs -- which they've never managed in franchise history, even last spring when Dallas finally toppled San Antonio in the playoffs -- is an ambitious No. 3 that likely would come with the Southwest title.

Knowing that the path back to the championship round will be even tougher is also why the Mavs considered only playoff-tested additions to the roster. Mike James was their top free-agent target, but the Mavs managed to come out deeper than they were after missing out on the edgy point guard. With only one highly coveted trade piece (Marquis Daniels) and their $5.2 million salary-cap exception, Dallas managed to add three vets with Finals experience (Anthony Johnson, Austin Croshere and Devean George) and bring back defensive specialist Greg Buckner.

The Mavs wanted to get more athletic on the perimeter (Buckner and first-round pick Maurice Ager), increase their shooting threat from outside (Croshere and George) and bring in a dependable point guard (Johnson) who can allow Terry to finish games at his preferred two spot. The result is a team that looks as though, if the coach's hunches are right, it won't be exposed deep in the playoffs like his '05-06 group.

"I like how part of that is a bitter taste that they have in their mouths. We have something that a lot of teams don't have, and that's the experience of being there as a team. That's why we didn't want to blow this team up."

Nowitzki calls it "a sour taste," but they're all in agreement on one thing: One implosion was plenty, thank you. The Mavs who reconvened on the University of North Texas campus last week are grateful for their collective shot at redemption, giving the impression that they'll learn and grow from their lost opportunity as opposed to backsliding.

Terry, not surprisingly, believes it more than anyone, judging by the full-court press he put on team equipment manager Al Whitley to get as many pairs of those trophy socks as Whitley could score.