SACRAMENTO -- Well, that settles that. Kevin Durant won't be defending his way to NBA stardom any time soon.

As for the rest, it remains a great unknown even after Durant, by default now the highest-drafted rookie playing in the league this fall, got his first taste of game action Tuesday against the Kings on a slow October evening in Sacramento.

There were flashes of the promise to come, as when the 6-9 Durant elevated almost effortlessly to drain a long 3-pointer in the fourth quarter, part of a 12-points-in-20-plus-minutes debut. There were suggestions of the work to be done, as when Durant twice fell to the floor and lost the ball while attempting to initiate offensive moves.

Mostly, though, in the wake of a 104-98 defeat, there was the undeniable fact that no matter where Seattle coach P.J. Carlesimo decides to play Durant, be it shooting guard, small forward or beyond, he's going to have to concede something on the defensive end to do it.

On Tuesday, Durant played the 2-guard, where Carlesimo says he'll stay for the time being. And as a sort of unofficial greeting, the Kings' Kevin Martin, whom Durant drew responsibility to defend, hung up 18 points in fewer than 14 first-half minutes.

"That's a good welcome to the league," said a bemused Durant, who was caught flat-footed several times by Martin's back-door cuts and head fakes. "Kevin Martin's going to be an All-Star this season."

Durant hardly embarrassed himself. The former Texas star, taken second overall by the Sonics after Portland nabbed the since-injured Greg Oden, went 5-for-9 from the field and grabbed three rebounds in minutes that were limited by Carlesimo's desire to see multiple combinations of players -- that, and the fact that Durant piled up four first-half fouls.

Durant also got a close look at the speed of the NBA game -- and, specifically, how speed can kill. Martin ran right by Durant several times to complete plays; in particular, he beat Durant back down the floor right after Durant had hit his first NBA game-situation bucket, a turn of events that led to Durant committing his first personal foul to prevent Martin from finishing a break.

"I don't think he was great, but having said that, he's still a rookie playing his first game," said Carlesimo, the former Spurs assistant and onetime Warriors coach who, like the Kings' Reggie Theus, was also in his first game with a new team.

"He got 12 points in less than 21 minutes," Carlesimo said. "Kevin has a knack for scoring. Even when it seems like he's not getting anything done out there, he finds a way to get some points  For him to miss free throws [Durant was 1-for-4] is uncharacteristic, and I think he'll be more of a factor on the boards. I just think it was a first step."

Durant's rookie running mate, Jeff Green was similarly up and down -- but you could say the same for most of the rosters on both sides, considering the game took place barely a week after camps had opened. (Example: The Kings committed 24 turnovers, while Seattle allowed 36 free throws.) Only Martin and a few other veterans, Mike Bibby and Seattle's Damien Wilkins among them, delivered solid efforts. 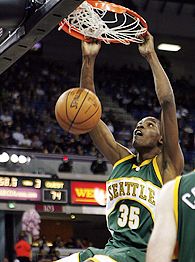 Durant looked every bit the rookie that he is. He badly missed his first shot over Martin in the first quarter before connecting on a spot-up jumper for his first two points. He also was stripped by Bibby while trying to get a handle on the ball, and his fourth foul, with four minutes remaining in the half, was a classic NBA okie-doke: Bibby edged in close to Durant as the Sonics tried to bring the ball upcourt, allowed Durant to crash into him and drew the charge.

"He came over to the bench and was looking at me for an explanation. I said, 'You're a rookie,'" said Seattle guard Jermaine Jackson, who has taken on the role of chaperone and mentor to both Durant and Green. "I said, 'You've just got to take that. Don't worry about that.' One thing about the NBA: You've got to forget fast."

Jackson was also on hand to remind Durant to slow down on offense -- good advice, it turns out. Durant twice flopped to the court in the second half and was stripped of the ball, and both times, he said, it was simply because he was moving too quickly to try to make something happen on his own rather than wait for a screen or pick-and-roll to come his way.

"I kind of got acquainted to the game and how's it going to be," Durant said. "It's just like I thought it was going to be: a fast-paced game, played hard, and it's a game of pace. You've got to slow your pace. I was going too quick at first, and J.J. [Jackson] calmed me down a little bit."

He will grow more calm. Carlesimo says he had no plans to move Durant from the two-guard, simply because, in Seattle's scheme, the difference between the 2- and 3-spots is minimal. And as for the defense? Consider: If he were playing at small forward Tuesday, Durant would have drawn Ron Artest to cover. In other words, welcome to the show.

Notes: Theus, who played in Sacramento in the first years after the franchise's move from Kansas City, made a victorious debut as the Kings' coach. Said Theus: "All in all, scoring 104 points-- to be honest with you, I didn't think we would score 50."  Sonics guard Luke Ridnour will undergo a CT scan Wednesday to determine whether he broke his nose after taking an Artest elbow to the face while trying to fight through a screen midway through the first quarter  Martin, the Kings' leading scorer last season, finished with 27 points in 23 minutes. He made all 12 of his free throws.

Mark Kreidler's book "Four Days to Glory: Wrestling With the Soul of the American Heartland", has been optioned for film/TV development by ESPN Original Entertainment. His book "Kids of Summer," about the curious ability of one town to consistently produce Little League champions, will be released in July 2008. A regular contributor to ESPN.com, he can be reached at mark@markkreidler.com.