TUCSON, Ariz. -- They lost Amare Stoudemire to another knee injury before a ball was dribbled at training camp. They opened that Amare-less camp just a week after Shawn Marion went public with a trade demand. Factor in that they'll never really forget how last season ended and there was a natural inclination for the Phoenix Suns to feel as though the color scheme of their new practice gear -- mourner's black -- was uncomfortably fitting.

You know the Suns, though. They don't think like the rest of us.

To wit: Mike D'Antoni swears that the Suns are going to respond to what happened in the San Antonio series by playing faster, if that's possible.

He says they're prepared to go even smaller with their lineups, if necessary.

He vows that they're going to be looser and happier, too, because D'Antoni contends that the Suns were more uptight than anyone on the outside ever knew.

So one of the first things D'Antoni did when he gathered his players at the University of Arizona this week was assure them that they won't be starting over with new philosophies or partaking in lab experiments to make the Suns conventional. To the contrary, D'Antoni believes his small-ball kings should try to run even more than they've been running -- and definitely have more fun -- to max out on the potential of their unique personnel mix and finally reach the NBA Finals.

"It can't be, 'This is all a disaster if we don't win the championship,' " D'Antoni said. "You don't enjoy the journey that way and I think we didn't enjoy the journey enough last year. We didn't enjoy January enough when we won 17 [games] in a row. We've got to get back to that gunslinging kind of mentality: 'If we win, we win. If we lose, we lose.' But we don't want to have this big burden on our heads at all times and I think it starts with me. I'll take care of it. Steve will take care of it."

It might not be as simple as D'Antoni makes it sound, but he'll indeed have Steve Nash as the assist man on this project as well. Nash shares his coach's contention that San Antonio's extra layer of togetherness hurt the Suns as much anything in the teams' second-round classic.

It was Nash who famously said last May that the various controversies in that series -- most notably those Game 5 suspensions of Stoudemire and Boris Diaw -- would "haunt us forever." Yet there was Nash on Tuesday in Tucson, conceding that the Spurs' better chemistry was a huge difference-maker, too.

"We need to be the top team in the league in chemistry," Nash said. "Or in the top two."

The problem there is that being No. 1 chemistry-wise -- or even No. 2 -- is an awfully high bar given how heavy their start has been. As if rebounding from the San Antonio disappointment wasn't sufficiently challenging, Phoenix just sent Stoudemire, at 24, to the operating table for the third time in two years and faces a whole new series of challenges with Marion after years of trying to convince the tireless forward -- unsuccessfully -- that he's not underappreciated by coaches, teammates and management. 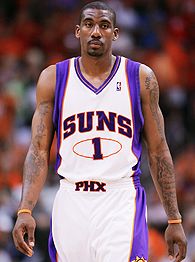 The Stoudemire-Marion relationship, furthermore, will remain a focal point for as long as they play together, especially with Grant Hill's name now competing for space on the marquee as well. Add it all up and it seems a lot safer to predict a further dip in togetherness as opposed to improvement, even if the Suns' bench is no longer populated by frustrated vets who hoped to play more.

The Suns, though, insist that the outlook is a lot sunnier than it might appear, with Stoudemire scheduled to be back on the practice floor in three weeks, possibly ready to play in time for Opening Night . . . and with Amare already having beaten microfracture surgery on his other knee pretty spectacularly. Nash, meanwhile, has repeatedly predicted that the "lovable" Marion -- while undeniably still is upset with the Suns' refusal to offer him a contract extension and stung by the trade rumors he's heard for so long -- will find it hard "to stay angry amongst his teammates."

It's also true that excelling at both ends when he's unhappy or feeling slighted would be nothing new for Marion. Which should help explain why new Suns president Steve Kerr insists that "we're going to be fine" in spite of the annual concerns about Phoenix playing enough defense to win a championship.

"We're going to be good," Kerr said. "Shawn told me and he told his teammates that he's ready to play. It was a distraction in the summer, but now it's time to play basketball, and I'm confident that Shawn is going to play and wants to play.

Good point. The Suns' recent track record in the moving-on game is indeed outstanding, whether it's making back-to-back trips to the conference finals in the face of numerous major injuries (Joe Johnson, Stoudemire, Raja Bell) or playing San Antonio so much closer than anyone else in spite of some difficult circumstances (most notably Nash's bloody nose in Game 1 and the two suspensions).

D'Antoni clearly remembers all that, judging by how much he's talking the Suns up in the midst of this heavy start. He was raving about Hill within minutes of coaching him for the first time, quickly convinced that Hill's ability to penetrate and handle the ball will enable Phoenix to actually speed up its offense. The coach is likewise boasting that he doesn't "even know if we have to call plays" with this group because the ball is moving so crisply.

The two-time MVP, though, probably wanted Hill even more than the coach. Surrounded by so much inexperience at key spots -- Stoudemire, Diaw and Leandro Barbosa all come to mind as special talents still learning the game -- Nash figured his Suns could stand to get a little older and wiser before seeing San Antonio again.

"You don't want to get too old," Suns guard Bell said with a smile, "but I think our window is still there. The Spurs are the champions. They deserved it and they played great. But I think we've moved on. We're going to be right at the top of the league again, vying for the championship."

Said D'Antoni: "If you want to look at [the current situation] with a cloud over our heads, that's one way. The other way is thinking we'll get Boris started [while Stoudemire recovers] and find out what Brian Skinner and Sean Marks can do. Amare's going to be fine, so that's how we'll look at it and hopefully that's the way it'll turn out.

"We're going to attack the league in a different mentality, like we did the first year [after re-signing Nash in the summer of 2004]. ... It's like I told Steve, 'You might have five more years left and you've got to enjoy each one.'

"Same with me. As a coach, I've got the best team you could have, the greatest guys and the best city. If I can't be happy in January, then I should be shot. And I wasn't last January. So I'm going to go read my Zen book and chill out."