NEW YORK -- Paul Pierce made the declaration in 1998 when he slipped to the 10th overall pick. Caron Butler made a similar emotional vow when he fell to No. 10 last year.

But not even Pierce and Butler have as much motivation to prove people wrong than Maciej Lampe. 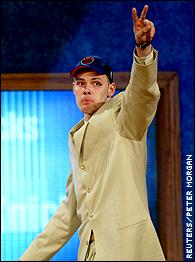 That's because not even Pierce and Butler endured a freefall as precipitous as Lampe's slide Thursday night, from the jackpot of the lottery to the non-guaranteed dollars of the second round.

Projected to go in the first round -- as high as No. 5 overall in ESPN.com's final mock draft -- the 7-foot center/forward from Poland suffered the indignity of being The Last Man At The Table at The Theatre in Madison Square Garden before finally being chosen by the New York Knicks with the first pick of the second round (30th overall).

"Everybody thought I was going to go a little higher," a teary-eyed Lampe said. "So it was kind of a surprise."

Apparently, the reason for Lampe's plummet was his contract with his Spanish club team, Real Madrid. Lampe and his agent thought they had a buyout for $1.8 million. FIBA, the world's basketball federation, felt otherwise.

"We got a letter from FIBA telling the teams that I had no buyout," Lampe said. "That wasn't true. But I thought everybody pretty much knew about the buyout. Maybe I was wrong."

Another culprit could've been Lampe's youth and inexperience. Just 18 years old, Lampe put up big numbers this past season but they were for Universidad Complutense, a team in Spain's top minor league that had Lampe on loan for 17 games.

Lampe, however, felt "great" about his auditions with 10 NBA teams. "I don't think I had any bad workouts," he said in a more upbeat mood the day before the draft.

On Thursday, however, the mood was more somber.

"I think I was in the mix for most of the teams in the lottery," he said. "The only team I didn't work out for was Golden State, so I wasn't thinking about that team. But I pictured myself going from five to 13. And everybody pretty much said I was right there."

The Miami Heat chose Dwyane Wade with the No. 5 pick. Then, one by one, the players invited to the draft got up and shook commissioner David Stern's hand. When the Phoenix Suns selected Serbian forward Zarko Cabarkapa at No. 17, a disillusioned Lampe sat all alone in the players area.

His hope of a guaranteed contract disappeared when Wake Forest's Josh Howard went to the Dallas Mavericks with the last pick of the first round.

"When everybody tells you one thing, that you're going in the lottery or going in the top 10, you think, 'What's the matter?' You feel like, 'What's wrong?' " said Lampe, who could have made approximately $8.5 million over three seasons as the fifth pick, but now faces the rookie minimum of $366,931.

The only thing that lifted Lampe's spirits were the cheers of the Knicks faithful, who chanted his name before the team made the first of its two second-round picks.

"The fans were great. I thank them very much for supporting me," Lampe said. "Hopefully, I'll be able to pay them back one day."

That other payback will take some time.

Joe Lago is the NBA editor at ESPN.com.