BOLOGNA, Italy -- When the only way to catch a glimpse at a potential top-five pick in this year's NBA draft requires a trip halfway around the world -- he better be something.

Nikoloz Tskitishvili turned out to be something. What? That's still the subject of debate among NBA circles.

Is he the next Pau Gasol or the next Dan Langhi? Is he the next in an evergrowing line of Eurostars who look like centers but play like guards, or is he just riding the next wave of Eurosplash hype into the NBA Draft lottery? 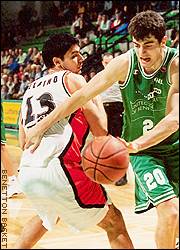 If you're searching for answers, the NBA draft scouting process isn't the place to go snooping around these days. In an age of information, the amount of reliable data on the top players in the world seems to be getting thinner by the day.

High school kids winning the lottery is beyond a trend. Underclassmen rushing to the draft is now the norm. No one who's any good plays in the NBA draft camps these days. Some kids refuse to even participate in private workouts for teams. And, now that NBA teams are robbing the cradle overseas, the problem is increased ten fold. Even most Italian basketball fans don't really know who the Tskitishvili this Nikoloz is.

So it's here, along with representatives from all 29 NBA teams, that we find ourselves. In Bologna, Italy, a few weeks ago, at the Euroleague Final Four. The same venue where Vlade Divac, Toni Kukoc, Peja Stojakovic, Rasho Nesterovic, Zeljko Rebraca and Pau Gasol were baptized. To watch this year's group of teens and twentysomethings who may be the best single crop of Europeans ever to come out.

The games were thrilling. The prospects, from Croatian small forward Bostjan Nachbar to Greek center Lazorous Papadopoulus, were all impressive.

But, as for the 19-year-old Tskitishvili? He didn't even play.

How can a guy projected as a lottery pick not even get in the game in Europe?

"Half the guys in the NBA couldn't play here anymore," former Nuggets and current Benetton head coach Mike D'Antoni said after the game. "The level of competition is that good."

When skepticism is expressed, D'Antoni invited ESPN.com to a private workout for Tskitishvili. A train ride two days later to Treviso is where the Georgian man of mystery in first seen in action.

Let's get this out the way right now. Tskitishvili looked great. But, the comparisons to Gasol are way off. Yes, he's tall and European. But he spends most of his time on the perimeter, not on the low post like Gasol did this season on his way to NBA Rookie of the Year honors.

After a 30-minute workout, it's clear Tskitishvili has the speed, the hops, the outside shooting touch and the ball-handling skills to rival anyone in the draft. He hit 10 NBA threes in a row at one point. His crossover would be phenomenal even for a smaller player. There is no stiff in this European.

"I want to play in the NBA if they think I am ready, Tskitishvili told ESPN.com following his workout. "My coach tells me I must get stronger, put on more pounds and toughen up. I work in the weight room every day. I still have a lot to learn but I think I have the skills to play in the NBA."

When Tskitishvili isn't practicing jumpers he's pirouetting at mid-court to the delight of his teammates.

Did we mention that he stands 7-feet in bare feet?

"Skita," until the age of 15, was a classically trained ballet dancer in the Eastern European nation of Georgia. Apparently, he was a pretty good one until he began to grow so rapidly that his instructor could no longer find a partner for him. That explains the pirouettes and a certain gracefulness that few NBA big men have.

It all looks good in practice.

Unfortunately it's really the only way most NBA general managers, and the few NBA journalists who make the trip, will see his skills.

So, he can practice. The question on every NBA GM's mind is, can he play?

Now that Benetton is out of the Euroleague and into country play, Tskitishvili is finally doing more than practicing. In Benetton's playoff opener against Trieste last week he scored 15 points on 6-of-11 shooting in 17 minutes of action. He also grabbed four rebounds, had three steals, three blocks and only one turnover.

"The kid can play," D'Antoni told ESPN.com. "I think he'll be a devastating four (power forward) in the league in a few years. He just needs a bigger body and a bigger rear end to handle the constant grind in the paint. Right now, he'll be fine out on the perimeter though. He can already nail threes -- NBA threes. He's 7-feet tall, how is anyone going to stop him?

"Fundamentally, he's all the way there. He's light years ahead of the high school and college kids when it comes to understanding the game. He's very fluid for a big man. And he's just a great kid. He's very polite and respectful. He works very, very hard."

Of course there are knocks. He's too skinny. He doesn't play defense. He's too young and too raw to contribute right now. These days every top pick seems to be missing those three key ingredients.

Five years ago, an international kid like Tskitishvili wouldn't be considered a legitimate draft prospect, let alone a lottery pick. International picks were reservered for lumbering big men and European stars like Kukoc and Stojakovic. The success of young players like Gasol, Dirk Nowitzki, Andrei Kirilenko and Tony Parker have obliterated the old stereotypes. If Kwame Brown can go number one ... Tskitishivili is fair game.

While his draft stock seems to be in constant flux, history will likely play in Tskitishivili's favor. Familiar players always dominate early mock drafts. Last year, there were questions whether Gasol would even be in the lottery just weeks before the draft. It's the players with upside that begin going through the roof on draft day.

And Skita has upside. One league executive told ESPN.com that after seeing him play in Treviso, Tskitishvili should be a top-five pick in the draft.

"On potential alone, I like him better than Kwame Brown," said the NBA executive. "He's already more advanced fundamentally, and I think he has the athleticism to compete with the elite players in the NBA. It's always scary to make a leap like this on limited information, but he's further along than any of the high school kids that have been drafted and his upside is still huge. I think, in five years, he could be better than Nowitzki because of his athleticism. Seven-footers like this just don't come along very often. Someone will take the chance."

At the very worst, Tskitishvili will slip to No. 13, where the Bucks pick. Milwaukee general manager Ernie Grunfeld spent three days in Treviso before the Euroleague Final Four and a source told ESPN.com that he was sold.

If Tskitishvili's agent, Marc Fleisher, gets word that he'll slip any lower, he'll take Skita out of the draft and try again next year. Right now, it looks like he'll easily slip into the Top 10. The word is that the Nuggets and Grizzlies both came away impressed after watching him in Treviso. The Rockets (before they got the No. 1 pick), Cavs, Suns and Heat have all scouted him extensively.

What does Tskitishvili think of all of the attention?

"One practice I look into stands and see Rudy T (Tomjanovich)," Skita told ESPN.com in Treviso. "Before, I only see these people on TV. I'm surprised that the NBA considers me a high draft pick. The situation came so early and I'm so young. I'm very happy. I think this was my dream and I was wishing about this and now my dream is coming true."

Skita's favorite players are Kevin Garnett and Kobe Bryant. Ironically, neither of his heros played a minute of college ball. Both were huge question marks when they came into the NBA. Now they dominate it.

"I want to be like Kevin Garnett," says Tskitishvili. "I want to run the floor, block shots, and play his type of game. We are both good passers. I think my shooting is a little better, but I know I need more experience. I think going to the NBA will help me make my game better."

"He's got the body and athleticism of Garnett, but he's got the perimeter game of Bryant," said one NBA general manager. "He's a big question mark only because you're never sure, when you draft them so young, how well the kid will adapt to the NBA type of game. But someone took a risk on Kwame and Tyson (Chandler) and someone will take a chance on this kid. No one wants to miss out on the next Gasol."

A Garnett-Bryant hybrid? It could be more hype. We'll never know until he gets over here. But who's willing to pass him up and suffer the consequences?