NEW YORK -- He didn't stroll onto the Madison Square Garden stage all decked out in a designer suit, but the Houston Rockets still got their man.

The Rockets surprised no one by making Chinese center Yao Ming the first pick of the 2002 NBA draft Wednesday night, after having logged more flyer miles and placed more long-distance phone calls than any NBA team just to get the China Basketball Association's stamp of approval to take the 7-foot-5 Yao.

"This is now a new start in my basketball life," Yao said from Beijing through an interpreter. "This is a new league in front of me for me to play, so it will be a new challenge for me." 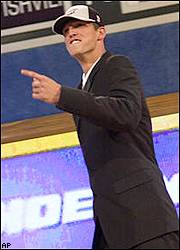 With the 15th overall pick, the Rockets added another import in Slovenia's Bostjan Nachbar, a 6-9 forward from Benetton Treviso of the Italian League. Five of the first 16 picks came from overseas as a record 17 foreign-born players were selected.

The rowdy crowd in The Theater at Madison Square Garden booed the Rockets' selection but cheered the Chicago Bulls' pick of Duke point guard Jay Williams with the No. 2 pick.

"They have a lot of great players and they are young and they are very talented," Williams said of the Bulls. "And they want to win. That's something I've known my whole life, so hopefully, we can get that going."

Fellow Dukie Mike Dunleavy was chosen with the third selection by the Golden State Warriors, making Williams and Dunleavy the highest draft duo from one school since UCLA's Lew Alcindor and Lucius Allen were taken first and third in 1969. The point guard-needy Warriors also acquired the rights to Slovenia's Jiri Welsch, taken 16th overall by the Philadelphia 76ers, for a future first-round pick and future first- or second-round pick.

"To have that honor of two guys picked in the top three says a lot for Duke, Coach K (Mike Krzyzewski) and our program," Dunleavy said.

Things continued to go as expected when the Memphis Grizzlies took Kansas forward Drew Gooden at No. 4. Gooden said he had a feeling he caught the eye of new Grizzlies team president Jerry West during his workout in Memphis.

"They needed another versatile guy who could contribute on the front line," Gooden said. "I'm not a single-dimension guy. I'm a multi-dimensional guy."

Just before the Denver Nuggets used the fifth pick on Nikoloz Tskitishvili, a 19-year-old 7-footer from the Republic of Georgia, it was announced that Nuggets forward Antonio McDyess might be dealt to the New York Knicks. As NBA commissioner David Stern approached the podium, the Knicks' most well-known fan, film director Spike Lee, yelled, "Don't tell me it's a trade!"

With a huge contingent from nearby Camden, N.J., Dajuan Wagner easily received the loudest and most positive response when the Cleveland Cavaliers got the Memphis guard with the No. 6 selection.

That is, it was the biggest reaction until the Knicks were booed loudly for taking Hilario, a 6-10 shot blocker, with the seventh pick. Fans then began to chant "Fire Layden!" to vent their disdain of Knicks general manager Scott Layden. They still weren't happy when the Knicks consummated the deal for McDyess and Denver's second first-round pick, which turned out to be Williams, who was the Big 10 Player of the Year as a sophomore but had a sub-par junior campaign last season.

Maryland power forward Chris Wilcox went to the Los Angeles Clippers with the eighth pick. The Clippers got another big man in Fresno State's Melvin Ely at No. 12, the latest the first senior of a draft has ever been selected.

A year after four high schoolers were taken in the first eight picks, Amare Stoudemire became the first high school draftee at No. 9 to the Phoenix Suns. The 6-9, 245-pound Stoudemire, a 19-year-old from Cypress Creek High in Orlando, Fla., was joined by Stanford sharpshooter Casey Jacobsen, the last draft invitee to leave his seat at No. 22.

The Miami Heat passed on Florida native Stoudemire to use the No. 10 pick on Connecticut forward Caron Butler, who was projected to be a top-five pick.

"I feel like I was one of the top five players in this draft," said an emotional Butler, whose draft stock experienced a Paul Pierce-like drop. "I'm going to make them pay for passing on me."

The Washington Wizards took Indiana forward Jared Jeffries at No. 11. Tennessee forward Marcus Haislip filled out the lottery pick class as the 13th selection by the Milwaukee Bucks.

Rockets legal counsel Michael Goldberg received a letter early
Wednesday, confirming that all concerns had been addressed and that
Yao would be available for the draft. He quickly relayed the
pre-dawn news to general manager Carroll Dawson.

"I thought I'd scream but I just fell back in bed and looked at
the ceiling," Dawson told The Associated Press. "I felt such a great relief. The whole
franchise wanted this so badly. I just felt that it would all be
worked out."
Dawson took a collective sigh of relief for the entire Rockets
organization.
They reached their goal by working their way through three days
of intricate negotiations in China with several entities,
establishing an atmosphere of trust and even capitalizing on the
famous face of coach Rudy Tomjanovich.
"The assurances we gave each other was that it's a win-win
situation," Goldberg said. "They know with training in the U.S.,
Yao Ming will become a much better player and help their national
team.
"They want what is necessary for the Rockets to win
championships here and for China to win championships there."
Houston's pursuit of China's best-known basketball player
started in May, when it parlayed an 8.9 percent chance in the NBA
lottery into the No. 1 pick in the draft.
They immediately started digging into the confusing maze of
getting Yao released from all of his Chinese commitments. Dawson,
Tomjanovich and Goldberg spent three days in China negotiating for
Yao's services.
Dawson thought a key to the process was Tomjanovich's popularity
in Beijing.
"Rudy is known the world over and they know him in China from
the basketball games that are televised over there and from his
coaching the U.S. Olympic team," Dawson said. "He walked down the
street there and it was just like being in the U.S."
Tomjanovich's presence really paid off when the Rockets visited
Yao's parents.
"They were getting ready to send their 21-year old son halfway
around the world and they were naturally concerned," Dawson said.
"But I could see the relief in the mother's eyes when she saw
Rudy. He was a familiar face."
Yao will be in the United States with the Chinese national team
in August to compete in the World Championships at Indianapolis. He
will play in the Asian Games in October and the Rockets anticipate
he'll miss only about six days of preseason training camp.
"He'll be playing in those games with our blessing," Goldberg
said. "Between now and then, we have the opportunity to get him
ready for the NBA season. Everyone wanted this to work."
Yao averaged 32.4 points, 18.9 rebounds, 4.5 blocked shots and
1.5 steals per game for the Shanghai Sharks last season. He's a
gifted outside shooter, although the Rockets know he must adapt to
the rougher play in the NBA.
He's convinced the Rockets he's ready for the NBA. Now he has to
prove himself to his new teammates.
"He'll have to fit in with us," Rockets guard Cuttino Mobley
said. "He's a very skilled player and that's fun, and he can pass
the ball too. We'll feel him out after he gets here. I'm sure
everything will work out. ...
"He's the No. 1 pick and he has skills, he's not just your
average 7-6 dude."