NEW YORK -- Despite the quizzical looks of onlookers at the Theater at Madison Square Garden, Jiri Welsch expressed no surprise in becoming the 16th pick of the 2002 NBA draft. 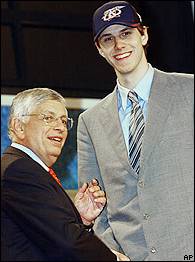 "I expected the 16th pick," he replied confidently.

Welsch was just shocked to be chosen by the Philadelphia 76ers, a team that didn't work him out. The move made sense, at least to the Sixers, who then dealt the Slovenian guard to the Golden State Warriors for two future picks.

The foreign flavor of Wednesday night's draft was not unexpected. The Houston Rockets' No. 1 selection of Chinese center Yao Ming began an international invasion that saw five of the first 16 selections used on overseas talent and a record 17 imports get their names called.

The 7-foot-5 Yao was quickly joined by Georgian 7-footer Nikoloz Tskitishvili (No. 5, Nuggets), Brazil's Maybyner "Nene" Hilario (No. 7, Knicks, then traded to Nuggets), Slovenian small forward Bostjan Nachbar (No. 15, Rockets) and Welsch. Yugoslavian 7-footer Nenad Krstic (No. 24, Nets) made it six international picks in the first round.

This year's group didn't surpass the record seven first-rounders born outside the United States taken in 2000. Still, this class should make more of an impact judging by their draft-selection status. The highest-drafted foreigner two years ago was UCLA's Jerome Moiso at No. 11, with four of the seven chosen in the last six picks of the first round.

Of the six first-rounders, only Kristic didn't confirm that he would play in the NBA this season.

"We all watch the NBA all the time," Nachbar said. "We know what to expect. We play with professionals so we're ready to play."

Such pro experience made it possible for Memphis Grizzlies forward Pau Gasol and San Antonio Spurs guard Tony Parker to excel as rookies last season. Extra years to mature and develop their games also prepared the Sacramento Kings' Peja Stojakovic and Hedo Turkoglu for the NBA.

Hence, when teams heard the comparisons of Tskitishvili to Dallas Mavericks All-Star forward Dirk Nowitzki, they didn't mind that the 19-year-old barely played for his Italian club team, Benetton Treviso. All they cared was that he had an all-around game.

If U.S. hoopsters haven't gotten the message yet, they better get it now. Big dunks no longer get you noticed.

"No one knew Tskitishvili last season and look where he goes," Nachbar said. "I'm sure there will be someone else next season that no one knows that will be drafted high. Why wouldn't the trend continue? We know we're ready to come and contribute.''

Yao became the first-ever player without game experience in the U.S. to be the NBA's No. 1 pick. Like the rest of the foreigners, he is eager to test his skills against Kevin Garnett, Tim Duncan and Shaquille O'Neal.

OK, maybe not Shaq. But he's glad to be headed for Houston.

"I want to go to the NBA to play a better game, " Yao said from Beijing through an interpreter. "Because the NBA has the best players in the world."

That's because the best players around the world are coming to America.

Joe Lago is the NBA editor for ESPN.com.