NEW YORK -- He is not the sort of toe-the-line star New York baseball fans became accustomed to as the Yankees won championships with Derek Jeter and the Core Four, and the say-no-evil David Wright felt like the lone beam of sunshine for the Mets. Forget that. If you ask Mets ace Matt Harvey who is best positioned to be the face of New York baseball now that Jeter has retired, Harvey could not tell a lie: He'd like the nomination himself.

"I'm going out there, I'm going to fight, I'm going to do everything to win -- not just for my teammates, but for New York," Harvey said early in spring training, after his electric first appearance in which he broke two bats and struck out four of the six hitters he faced with a fastball that topped out at 99 mph. Since then, Harvey has only continued to defuse worries about how he'd come back from a 1½-year layoff because of Tommy John surgery.

There's no one template for what makes an athlete the face of New York sports, beyond this simple requirement: You have to win. Big.

After that? Being as colorful and blunt as Harvey is isn't a necessity. But it sure makes everything a hell of a lot more fun if you show some flair like Reggie Jackson and Doc Gooden did, or you make your bones in this town by pulling off some uncanny magic in the biggest moments. Think of the Jets' Joe Namath and The Guarantee, Eli Manning at the end of both Super Bowls he won, Mark Messier when the Rangers snapped their 54-year-old Stanley Cup drought in 1994.

The Face of New York Baseball 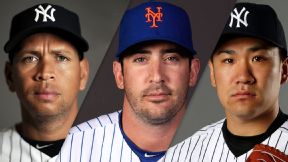 For the better part of the past 20 years, it was Derek Jeter. But now that The Captain is retired, who will take his place? Rank 'Em

Harvey, who is still just 25, seems like a star capable of delivering magic. If you ask him to define his attacking pitching style, he'll often smirk and call it "primal." He's got swagger. He's got gall. He's nakedly ambitious too. But all of it is offset by his compensating sense of amusement -- he often seems to be smiling at some inside joke only he's in on -- and his unapologetic determination to make sure his run in New York is the time of his life.

"Dirty martinis and music -- that's the big motto in our family," Harvey once joked.

Given all the attention he attracts, it's easy to forget Harvey's entire big league résumé still consists of only a 12-10 record and 237 2/3 innings pitched. But Harvey's talent was so arresting after he splashed down here and became the National League's starter in the All-Star Game at Citi Field in the summer of 2013, it didn't take long before he sought -- or got -- all the perks that come with being a superstar jock in New York: the secret phone numbers that celebs are given to hot restaurants to get a table whenever they like; the guest shot on Jimmy Fallon's late-night show; a personal shopper at the hip clothier John Varvatos; and the supermodel girlfriends, starting with Russian-born Anne Vyalitsyna, who appeared nine straight years in Sports Illustrated's swimsuit issue.

(The day the New York Post outed Harvey and Vyalitsyna as a couple in a photo, Harvey got a standing ovation from his teammates the next time he walked into the Mets' clubhouse for a game.)

Facts like that floated up in two of the more revealing interviews Harvey has given so far -- this story with Men's Journal in 2013 and another that posted this week in New York magazine. A recurring theme in both profiles is Harvey's rapacious appetite to be tops in everything he does. He seems to fit New York like New York fits him.

Who wants to sleepwalk through life in the city that never sleeps?

Harvey said he seeks fashion tips from debonair Rangers goaltender Henrik Lundqvist ("He always makes the best-dressed lists. Well, I want to be on those lists"). He volunteered he looks forward to the day his superagent Scott Boras gets him his first free-agency windfall ("I've gotta wait for that $200 million contract. If I'm going to buy an apartment, it has to be the best apartment in the city"), and he actively sought Jeter's advice on how to handle his off-field exploits.

"That guy is the model," Harvey told Men's Journal. "I mean, first off, let's just look at the women he's dated. Obviously, he goes out -- he's meeting these girls somewhere -- but you never hear about it. That's where I want to be."

It's admissions like that -- and similar statements like "I'm young, I'm single, I want to be in the mix ... I will never apologize for having a life ... I am going to go out" -- that have earned Harvey comparisons to Namath. Both have a wink-wink lust for New York nightlife. But the memory of Namath posing in panty hose way back when -- which was considered risqué at the time -- seems laughably tame compared to Harvey's decision to pose nude for ESPN The Magazine's "Body" issue in a hotel hallway, with only a room-service tray slapped over his midsection.

If Harvey pitches well and wins, all of these things will be a blithe part of his legend. And if he doesn't? He'll be criticized for having too many distractions and too many run-ins with Mets management.

But Harvey, who grew up not far away in Mystic, Connecticut, knows such trade-offs are all part of the bargain. He seems unworried that his King of the City ambitions won't work out. Quite the opposite. He has spoken of going to the window of his 10th-floor apartment in the East Village and looking out over Manhattan and thinking, "Yes, New York. I'm here."

It's possible to think of the Mets making the playoffs this season with Harvey.

But it's nearly impossible to see them doing it without him.

Right now, it's also hard to see anyone eclipsing him as the new face of New York baseball. But here are some dark-horse contenders:

The fondness Yankees fans have for Tanaka's Japanese countryman Hideki Matsui, especially after Matsui's 2009 World Series MVP honors, suggests that the face of New York baseball needn't be an English speaker. And Tanaka is not. But Tanaka, like Harvey, does have a tantalizing array of pitches and a sense of comfort in the spotlight that dates back to his superstar career in Japan.

WHY TANAKA CAN ECLIPSE HARVEY: Tanaka can collect strikeouts at the same clip, and he has a bulldog mentality, same as Harvey does. Tanaka could've played it safe with the partially torn ulnar collateral ligament in his elbow last season. But he went ahead and made two late starts at the end of the year though the Yanks were out of the playoffs.

WHY TANAKA CAN'T: Tanaka already has a lot of miles on his arm, and his elbow could blow at any minute. Even if he stays healthy but decides to reduce the wear on his elbow by throwing fewer splitters -- his out pitch -- he might not be the same pitcher.

Wright is the last remaining homegrown star of his baseball generation in New York. He's been so loyal to the Mets -- taking less money than he could've gotten on the free-agent market, sticking with the team through the lean years and the Madoff scandal -- he is moving into the same sentimental territory that the Yanks' Don Mattingly did late in his career. Fans are rooting for Wright to be rewarded with at least one World Series before he's done.

WHY WRIGHT CAN ECLIPSE HARVEY: Wright opted out of offseason shoulder surgery, but after rehabbing says his swing and power should no longer be inhibited.

WHY WRIGHT CAN'T: What if Wright finds out that even though the Mets moved in the fences at Citi Field a second time, his decrease in production was not attributable to injuries or the previously large dimensions crawling into his head? What if the reality is worse: At age 32, Wright is inexorably moving toward the twilight of his career.

Pineda, who had shoulder surgery in 2012, has pitched better at times than any Yankees starter during spring training. He could become the ace of the Yanks' 2015 staff as CC Sabathia ages out, or Tanaka hopes his elbow holds up (wishful thinking that didn't work out for the Mets' Zack Wheeler).

Pineda has a gregarious personality that drifts a little toward Pedro Martinez's sometime wackiness too. And Pineda's chin-trembling vulnerability after he was caught last April pitching with a glob of pine tar on his neck was received as almost, well ... endearing, not just slapstick. It was his signature Yankees moment so far. And yet, rather than just screech "Did Pineda really think he could get away with THAT?" and howl with laughter, a lot of folks complained Pineda's veteran teammates and manager Joe Girardi should've given the kid better guidance on how to hide the pine tar, since nearly every pitcher uses it. So ... wait, it was their fault?

WHY PINEDA CAN ECLIPSE HARVEY: He could be the power pitcher who leads the Yanks to the playoffs while the Mets don't contend.

WHY PINEDA CAN'T: The Yanks need him to be very good, he still has a lot to learn about the art of pitching, and it's hard to predict how he'll handle expectations.

The Mets second-year pitcher was the 2014 National League Rookie of the Year. DeGrom is still green, but that didn't prevent him from often being the best pitcher in town last season after Tanaka missed time. DeGrom could win even more this year if the Mets' offense improves as much as the team hopes.

WHY DEGROM CAN ECLIPSE HARVEY: He gets to enjoy life as Harvey's wingman, and not feel the weight of being the stopper who has to end losing streaks, the guy who starts opposite other teams' staff aces.

WHY DEGROM CAN'T: DeGrom didn't have much pressure last year. This year, the Mets will be playing for the postseason and, with Wheeler gone, he will be expected to duplicate or exceed his rookie year success against a league that's now had a long look at him. As hitters adjust, will he?

A-Rod has hit two home runs in spring training, which may be two more than cynics expected. Presuming he doesn't have to play the field much -- he's looked like a statue at times during spring training -- Rodriguez will be free for the first time in his career to concentrate on just hitting, the thing he used to do best.

Paradoxical as this sounds, it's easy to imagine scenarios in which A-Rod would not be the face of New York baseball if he has a good to great offensive year because people will just start charging he's back on PEDs. But he could be the face of baseball around here if he stinks and both clubs flop. His failure would be emblematic of the Yankees' strategy of relying on Rodriguez and so many other aging-out, highly paid stars like oft-injured Mark Teixeira at first, and brittle Carlos Beltran as their everyday right fielder though he turns 38 in a month. Who thought that was a good idea?

WHY A-ROD CAN ECLIPSE HARVEY: A-Rod's potential to hog headlines is huge either way. If the Yanks find themselves in only a race to the bottom, no one sparks criticism and loathing like A-Rod does. And if A-Rod is the X factor that helps the Yanks become the only playoff team in town, it'll be a talking point.

WHY A-ROD CAN'T: Because he's A-Rod. And with A-Rod, it's always something.