And so it is done. Michael Vick is finished and likely heading to prison. His battle is now with the federal government and the cold reality that whenever he emerges from his punishment, he will not be the same man he is today.

While the federal government, the NFL and Atlanta Falcons owner Arthur Blank all stand tall today, it is the NFL Players Association and head Gene Upshaw who stand to lose the most.

Although public recognition is not always the best barometer of influence, Upshaw nevertheless has not been mentioned as a power player involved at the table negotiating Vick's return or the terms of Vick's inevitable suspension.

By making player conduct his first big task, the matter upon which he has staked the first year of his term as NFL commissioner, Roger Goodell focused on an issue that certainly appealed to fans and simultaneously put the NFLPA on the defensive. Goodell has been strong on this subject, and the union has been on the run ever since.

Instead, the union is gambling that its partnership with Goodell is more valuable than the kind of adversarial approach other sports unions have with their commissioners. Upshaw is banking on cultivating the commissioner and his office to avoid surprises and possible embarrassment for either side. Although many of his defenders believe this is the correct approach, the reality is the union has allowed itself to be upstaged.

And now Upshaw's absence in the Vick case is a chilling signal to every player donning a helmet in the NFL today.

In a statement earlier this week, Upshaw said the criminal conduct to which Vick will plead guilty "cannot be condoned under any circumstances."

"Speaking personally, as I have previously stated, the practice of dogfighting is offensive and completely unacceptable," Upshaw said. "I can only hope that Mr. Vick, who is a young man, will learn from this awful experience."

Upshaw's statement read as an abandonment of Vick and a capitulation to Goodell, forcing the union and its players to wrestle with an uncomfortable question: Must the union, to preserve balance with an ambitious commissioner, defend even the indefensible? Today, in the case of Vick and during Goodell's short term, the union's answer appears to be no.

In the coming years, that will prove to be a colossal mistake. Vick deserves to go to prison, but the union's job is to defend every player's right to work.

The Major League Baseball Players Association, built and sustained by Marvin Miller, Donald Fehr and three generations of resolute players, long ago answered the question of defending the indefensible. The multiple drug abuse cases of Steve Howe, the spitting incident of Roberto Alomar and most recently the way the players association has handled much of the steroids era have served as examples of a union not finding itself on the right or popular side of an issue and at risk of damaging its public image. The rationale was this: How you fight today sets the parameters for the battles of tomorrow.

"I know that the first thing everyone is going to say is that Donald Fehr would have never stood for this, or for the way the thing with Pacman went down," said a source within the NFLPA. "But this is a different situation. What could we have done with Vick? With Pacman, it was the number of repeat offenses that tied up our hands. We did what we could, but it wasn't like -- especially in the Vick situation -- like we had a lot of leverage."

It is unclear whether Upshaw is at the bargaining table now in negotiating a settlement for Vick's suspension and parameters for -- however remote -- a potential return to the NFL. He's vacationing until after Labor Day. But neither Vick nor Pacman Jones nor Tank Johnson is the union's real issue.

The issue is precedent.

The reason is clear. The responsibility of a union is to defend its membership -- every time, all the time, if for no other reasons than to send a dissenting vote to management that its membership always will be protected by a strong union and to alert the commissioner that his powers always will be checked by an advocate for the players. The union's message should be that a commissioner cannot simply do whatever he wants.

Football, at least publicly and to the future detriment of its players, seems to have lost much of this lesson in favor of labor peace and public tranquility.

In an example of sturdy, faith-restoring professionalism unimpressed by celebrity in a celebrity-obsessed culture, the feds soberly and joylessly got their man. Along the way, we have seen the law-and-order Goodell act swiftly and decisively to establish his image as new but not intimidated by the players or his responsibility.

Player and league sources say the union and league have a "no surprises" policy, within which the union is kept apprised of the thinking inside the commissioner's office, which is why the league and union do not fight as publicly and ruthlessly as in, for example, Major League Baseball. An NFLPA source disputes the idea that over the past few months Goodell has gotten everything he wanted at the expense of the union, pointing to the concession Goodell made in the Pacman Jones case that, should he avoid incident, Jones could be reinstated by Week 10 instead of serving a year's suspension.

Another source said that in keeping up with the "no surprises" mandate, the union has been in close communication with the commissioner's office during its independent investigation of Vick "every step of the way." One player representative from an NFC team said Vick was not abandoned by the union, but was stealthily aided by it -- Billy Martin, Vick's lead counsel, joined the Vick defense team on the recommendation of the union. 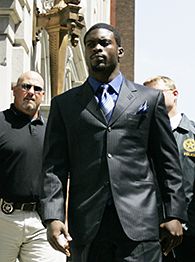 During the Vick controversy, Goodell burnished his reputation as the exception to the current trend toward unaccountability that has prospered from the Green Zone to the end zone to the foul pole by espousing old-fashioned values: You break the rules, you pay. An owner in lockstep, Blank followed. As the evidence against his franchise quarterback mounted, Blank grew more pointed and more resolute, revealing his belief that Vick betrayed their private relationship and, as such, he would not accept or foster special dispensation for the especially talented quarterback to whom not so long ago he committed $130 million over 10 years.

What Goodell has done, shrewdly and effectively, is to tap the mood of the country and use it in creating his mandate. Just as in the late 1960s and '70s, when a collective energy existed to empower the players with more freedom of movement, greater salaries and post-career opportunities in baseball, now there is momentum for the disciplining of today's elite who believe their checkbooks elevate them beyond the reach of the public, responsibility and the law. The common attitude today is that players are out of control, above accountability, empowered to be absolved of responsibility by the teams that pay them and the leagues that publicly condemn abhorrent behavior but refuse to administer proper sanction. Jason Giambi acknowledged his "personal history regarding steroids," but MLB commissioner Bud Selig did not take action against him.

In the NFL, Goodell has shattered that conception in the opening year of his first term. Sanctioning players is his right and, as commissioner, his responsibility. The commissioner does not work for the players. Only in the sense that the league's interests parallel those of the 32 owners is he even employed to better the game on the field. Whether the name is Goodell, Rozelle, Selig or Stern, all sports commissioners work for the owners. They are hired by owners, not the players, after all. Goodell is not the players' advocate.

Each Goodell victory today without a loud, dissenting union voice makes the union's job of defense in a less clear circumstance -- a player not facing charges as serious as Jones or Vick but with as high a profile -- that much more difficult.

Difficulty in overcoming Goodell's guidelines for suspensions will be the price for today's passivity.

Upshaw will wear the bull's-eye, but the issue is more with some of his players who seemed unable to separate Vick from the larger issue of checking the commissioner. The union, because of the severity of the offenses involving some of its players -- Vick's barbarism has lost him credibility as a man, while Jones' actions might have led to an innocent person's being paralyzed for life -- has been backed into a defensive position.

Focusing on Vick or Jones specifically undermines the larger issue, which is to curb the power of the commissioner in the future.

"I know it looks like Gene is always in the owners' pocket," said one NFC player, "but what could you do with this? This dude was, like, shooting dogs in the head, drowning them and whatnot. I don't agree with Gene, especially on the retired players thing, but Vick is too hot right now. You'd be out of your mind to touch him."

So the union has an understanding that it won't be blindsided by a runaway commissioner, adopting a position closer to equity shareholder than skeptical watchdog. It has labor peace and can take comfort in not worrying about losing public goodwill during contract years or losing face should its membership crack during pressurized labor negotiations. The union seems comforted that it is treated as an inside player instead of a hostile entity. But what good is maintaining the peace if it is not accompanied by power?

Howard Bryant is a senior writer for ESPN.com and ESPN the Magazine. He is the author of "Shut Out: A Story of Race and Baseball in Boston" and "Juicing the Game: Drugs, Power and the Fight for the Soul of Major League Baseball." He can be reached at Howard.Bryant@espn3.com.