There has been so much negative news surrounding the NFL recently it is easy to ignore what Cleveland Browns wide receiver Braylon Edwards did this week.

The man pledged $1 million to fund college scholarships for 100 kids in the Cleveland Municipal School District, formally announcing the plan Wednesday afternoon. Now this certainly doesn't sound as compelling as Pacman Jones' problems or Michael Vick's alleged involvement in dogfighting, but it matters a lot more than either of those issues. This story here is about hope and commitment and, above all else, the difference athletes really can make in a community.

Edwards is certainly not the only athlete with a big heart. Countless NFL players have given selflessly over the years, with Tampa Bay's Derrick Brooks, Atlanta's Warrick Dunn and New Orleans' Reggie Bush coming immediately to mind.

But it is fair to say Edwards' timing couldn't have been better. By digging deep into his bank account, he gave numerous parents something to smile about and lured the spotlight toward one of the really troubling issues in our society: lousy public education.

What makes this program so impressive is that Edwards went the extra mile. Numerous athletes speak to kids at schools, or read to them in classrooms. Edwards, now entering his third year in Cleveland, is investing in these children and their futures.

"I've always wanted to do my part," Edwards said. "And I definitely believe that we're better off when we help the people who really need it. In order to secure a positive future for our country, we have to start with these kids. We have to support them and give them options."

Edwards' latest plan -- he also endowed a $500,000 scholarship at his alma mater, the University of Michigan -- isn't complicated. In December 2006, he picked the 100 recipients after his foundation combed through 1,000 essays submitted by eighth-graders who had been recommended for the program by their teachers.

After deciding on the pool of kids, Edwards set the guidelines. Every child involved in the program needs to maintain a 2.5 grade point average throughout high school. They must do 15 hours of community service every year until they graduate. They also can't have any unexcused absences. If they do all this, Edwards will help pay for their college education. 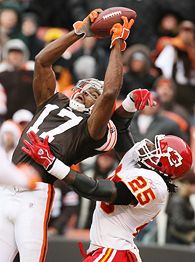 While the money is important, the overall structure of the program means just as much. These kids will receive mentoring and tutoring, and enjoy a basic support system Edwards believes is vital to the success of this plan.

"I went to public schools [in Detroit] and I knew a lot of kids who didn't have what I had," he said. "They didn't have two parents. They didn't have any money. I saw too many kids who had the potential to succeed but they didn't have a reason to believe in anything. Those kids were behind the eight ball before they ever had a chance to grow up."

It's those memories that make Edwards fume when he hears all the recent outrage over rap music and how lewd lyrics are corroding the values of America's youth. He realizes inner-city kids aren't endangered because of the music they like. It's because they're not getting the help that allows them to make better choices with their lives.

"I listened to rap music when I was in school and I still do now," he said. "But the thing is that I was still going to class. Most of the kids who are falling by the wayside don't have parents who are doing their jobs and they're in schools that are failing them."

Edwards is already thinking about the next step in his program. The 100 kids chosen for this batch of scholarships -- he is considering adding more scholarships in the future -- will be closely monitored during their high school years to make certain they're reaching their goals. He's also talking about starting a similar program in the Detroit public schools in October. Over time, Edwards hopes the program will generate enough interest that other athletes might be inspired to start their own scholarship funds.

If they need any more reason to get involved, they can ask Edwards how he felt at Wednesday's assembly at Cleveland's Lincoln-West High School, where he met all 100 recipients for the first time. At the end of the event, all the children lined up to shake his hand, and he listened to their comments and those of their parents.

One girl told Edwards he couldn't imagine how much this opportunity meant to her. Another boy echoed a similar sentiment. Finally, a mother approached Edwards and said she hadn't even thought about college for her son until the boy was chosen for this award. At best, she figured, her son would have to go to a trade school.

"How do you have a kid in the eighth grade who doesn't even have the possibility of going to college?" he said. "That's crazy."

Unfortunately, it's also a reality for too many of the children Edwards is trying to help. But maybe there will be a little more hope in the next set of parents Edwards meets through this program. In the end, that's the obvious beauty of what he's done: He's clearly given marginalized people a real reason to dream again.