My first thought as I watched Donovan McNabb's controversial HBO interview was that it was about time he became a more candid celebrity.

Not only has the Philadelphia Eagles quarterback been one of the most criticized Pro Bowl-level signal-callers in history, he's also been the one least willing to speak up for himself. He's turned the other cheek when attacked. He's remained quiet in the face of controversy. But now, for some strange reason, he's opting for a different approach to his public relations.

He's gone on the offensive.

This is a good thing for McNabb, by the way. The man has strong opinions and clever insights, but too often he has shielded them from the public, as if he feared letting people know what he really believed. He's taken a bland, diplomatic approach to celebrity that has allowed black stars in other sports -- Michael Jordan and Tiger Woods immediately come to mind -- to avoid negative press. But it's a strategy that hasn't done McNabb any good. If anything, it's given his critics more reason to come after him. 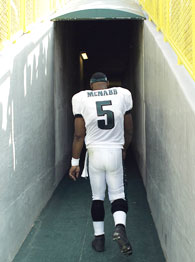 Just look at his history. McNabb literally has lived a model life as a pro athlete and he's still been dragged into some sort of public drama on a near-annual basis.

Local fans booed when Philadelphia selected him second overall in the 1999 draft. Radio personality Rush Limbaugh ripped him during Limbaugh's short-lived tenure on ESPN's "NFL Countdown." Former Eagles wide receiver Freddie Mitchell once called McNabb "a company man." A local NAACP leader once questioned McNabb's playing style. And, of course, we all know the hell that Terrell Owens brought to the quarterback's life during the 2005 season.

The one constant in all these issues is that McNabb always has taken the high road when given a chance to respond to these situations. Other people bash him and he constantly acts like it doesn't bother him, like it's better to just move on in a classy fashion than to lower himself to the depths of his critics. Sure, it's noble, but McNabb also suffered in the process. At times, he came off as insincere and political when we all knew he was hurt and clearly angered by those attacks.

However, McNabb obviously isn't going to let his silence define him any longer. You could see that in his interview with James Brown of "Real Sports." Though much already has been made about his racially charged comments -- that black quarterbacks have to do more to succeed than white quarterbacks and that black signal-callers also face more criticism than their white counterparts -- the more important issue is that McNabb felt comfortable saying those things. In years past, he wouldn't have come close to airing such provocative thoughts. Now it's apparent he likes the idea of stirring the pot. A lot.

There wasn't any indication that McNabb was going to wilt when Brown pressed him on those topics of race during the interview that aired Tuesday. McNabb didn't backtrack or dance around the issues once he introduced them into the discussion. He charged ahead with calm, candid answers that would've made Eagles head coach Andy Reid cringe -- and he did it with no apologies.

Now I'm not saying McNabb hadn't thought long and hard about how those statements would play publicly because that is his personality. I'm just saying it was refreshing to see a consistently cautious man take such a huge risk in a public-speaking situation.

The longer McNabb spoke in that interview, the more obvious it became that he is reaching a turning point in his life. As a black kid growing up in a predominantly white suburb in Chicago, he surely had to pick his battles carefully. As a rising star quarterback at Syracuse and in his early days in the NFL, he had to gauge the right time and the right way to say things. But McNabb will turn 31 in November and he's in his ninth season in Philadelphia. He's grown enough to know that he can no longer be shackled by inhibition.

In fact, I'd bet McNabb's willingness to speak out more often has plenty to do with all the recent questions about his future with the Eagles. Let's face it: His time with that team is dwindling. The Eagles' decision to select backup quarterback Kevin Kolb in the second round of this year's draft is all the proof he needs of that. And the reality is that McNabb probably feels less concerned about speaking his mind these days because he has far less to lose.

You have to understand that there's a certain freedom that comes with knowing the end is near. Just look at the way McNabb responded to the Eagles' surprising decision to release popular middle linebacker Jeremiah Trotter midway through training camp. If this had happened a few years ago -- and it has happened often in an organization that routinely dumps aging, popular players on the cusp of declining -- McNabb would've expressed his disappointment through vanilla statements about the reality of life in the NFL. This time he was more open about his disdain for the move. Those words resonated for a few days later.

What I'm guessing is that McNabb knows the Eagles will be just as cold-blooded when it comes time for them to decide his fate with that organization. And if he's going out like that, it's better for him to start getting some things off his chest. I don't mind that he's decided to air his thoughts at a time when he's playing poorly and struggling to return from major knee surgery. I'm just happy to see that he's letting the world see he has a lot more to say than any of us ever knew.