I said this at the start of the season and I'll say it again: Evaluating teams based on how they look on paper is always a waste of time. You really have to wait until a team takes the field to have some sense of what they're capable of doing.

And now that three weeks of the NFL season have passed, I can offer a more accurate assessment of which teams are overrated and which ones are underrated. Hey, I'm going to be doing it eventually, so I might as well get an early start on the evaluations. 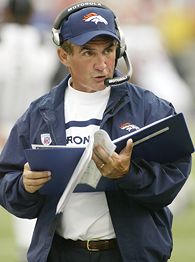 1. Denver: This team really should be 0-3 instead of 2-1. The Broncos barely escaped Buffalo and they beat Oakland only because Sebastian Janikowski choked on his second chance at a game-winning field goal in Week 2. All you have to know about the Broncos is that their run defense is killing them. They're giving up 166 yards a game (tied for 29th in the NFL) and the addition of five new starters and a new coordinator on that side of the ball apparently were bigger issues than they realized.

2. Dallas: Yes, I like the way the Cowboys are playing on offense. But let's also be honest: Coach Wade Phillips is supposed to know a thing or two about defense and the Cowboys are fairly mediocre on that side of the ball. So far their best efforts have come against a team with few weapons (Miami) and another with no quarterback (Chicago). They've also dealt with key injuries, such as the torn biceps that ended the season for nose tackle Jason Ferguson and the foot injury that has hobbled cornerback Terence Newman. So while the Cowboys are the NFC's hottest team, I have to wonder when that defense starts impacting their unblemished record.

3. San Diego: I know, I know. This one is a no-brainer. The Chargers look so disappointing right now that the Kansas City Chiefs -- with an offense that is averaging 8.7 points a game -- have a shot at stealing a victory on the road this weekend. Aside from the presence of coach Norv Turner, the second-biggest issue for this team is the lack of talent at wide receiver. You'd think the inability to get LaDainian Tomlinson going would open up more opportunities down the field. Instead, Pro Bowl tight end Antonio Gates continues to be the lone constant in the passing game. Something tells me that will be a problem for this team all season.

4. Chicago: As bad as Rex Grossman was, I just have a hard time believing that Brian Griese is going to make them a better team. Remember, we're talking about a guy who lost his job to Chris Simms in Tampa Bay. I also don't see greatness in Cedric Benson, even though some scouts tell me that he's the type of runner who gets better with more carries. Right now, I just don't see this offense helping a defense that has been worn down by injuries and too much time on the field.

5. Cincinnati: Any team that gives up 51 points to Cleveland has to be on this list. The problem with the Bengals is their defense is only good when it creates turnovers, as it did in a season-opening win over Baltimore. Without those takeaways, opponents clearly have little trouble moving the ball against them. This wouldn't be such an issue if they played in the NFC. But in a division that also includes Pittsburgh and Baltimore, the Bengals will struggle to gain ground as we move deeper into the season.

1. Philadelphia: The Eagles are the best 1-2 team in football. If it weren't for a couple of punt return miscues in a season-opening loss to Green Bay, they'd be on the right side of .500 right now. Their 56-21 win over Detroit also indicates that their offense is becoming as explosive as I thought it would be coming out of training camp. Their only major concern should be the health of running back Brian Westbrook. He's so dinged up each week, it's hard to imagine him playing an entire season.

2. New England: I admit it: I looked stupid on this one. I figured the early season absence of strong safety Rodney Harrison and defensive end Richard Seymour would hurt the Patriots' hopes of a fast start. Now I only can wonder how good they'll be when they're at full strength. If Tom Brady continues his torrid pace, he'll run away with NFL MVP honors. And as for that Moss fellow, he's still pretty scary.

3. Indianapolis: This just in: The Colts actually won the Super Bowl last season. You'd think they'd get a little more credit for that instead of hearing people talk about how great the Patriots are. In case you also haven't noticed, the Colts are sharper on defense and the offense continues to click as it always has. So until somebody dethrones them in the postseason, we should give them a pretty good shot at repeating.

4. Pittsburgh: New coach Mike Tomlin is quietly doing a great job in his first season with the Steelers. Quarterback Ben Roethlisberger has returned to his steady, efficient ways and Willie Parker continues to prove why he's one of the NFL's top backs (he's averaging a league-best 122.7 yards in his first three games). Throw in a defense that ranks first in scoring defense (8.7 points a game) and you have a squad built for a strong postseason run.

5. Green Bay: I didn't think the Packers were legitimate until they beat San Diego last week. Now I can see them making a run at a playoff spot. The Packers' defense is playing so well, quarterback Brett Favre has shown the kind of patience on offense that we haven't seen from him in years. He's managing the game and leading the Packers to the kind of season that didn't seem possible three weeks ago.