SEATTLE -- During the offseason, Seahawks running back Shaun Alexander, an unsigned "franchise" player who considered holding out of training camp, kept taking strange calls from his teammates. He was intrigued.

"I got calls during mini-camp saying, 'Shaun, it's different, I'm telling you,' " Alexander said following Sunday's improbable 13-10 come-from-behind victory over the Cowboys. "I'd asked several different guys, 'How's practicing going?' They'd say, 'Dude, there is something different about this team.' There is a little bit more maturity, a little bit more friendship, a little bit more 'I got your back.' "

The team that Torry Holt said didn't have the mental toughness to win close games at the end scored 10 points in the final 40 seconds to beat a Cowboys team that dominated them most of the day. For two years, the Seahawks lost game like these -- at home and on the road. Sunday, we witnessed the continued growth of a team that is suddenly becoming a factor at 5-2. 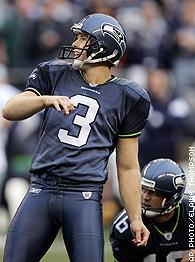 "It's tough to articulate," quarterback Matt Hasselbeck said of the different feeling about this edition of the Seahawks. "It's a feeling that things are just different than they've been here in the past. I know a lot of us have always taken pride in being a Seahawk, and taken pride in doing our jobs. We're probably a little bit closer as a team, closer as a group.

"A lot has happened. People have gotten a little sick or injured. You [fight] through adversity like that."

Seattle certainly has experienced its share. Defensive coordinator Ray Rhodes suffered a mild stroke in September. Mike Holmgren had some heart concerns during the offseason. Perhaps the most stunning development came a week ago Monday morning, when safety Ken Hamlin, an inspirational leader of the defense, suffered a fractured skull and damaged brain tissue when he was assaulted outside a Seattle nightclub by someone wielding a metal sign.

On Saturday nights following a winning week, as part of the team's weekly preparation, Seahawks players watch a coaches'-made highlight tape. Hamlin, still in the hospital, was seen near the end of the tape this past Saturday urging his teammates to "do what we do." In the final two minutes, the Seahawks "did what they do."

The Cowboys led 10-3 after Jose Cortez booted a 21-yard field goal with 2:06 remaining. After the kickoff, the Seahawks had the ball at their own 19-yard line against a Cowboys defense that stuffed them all day.

"Talk is kinda cheap in situations like that," Hasselbeck said. "It's a matter of making plays. That last drive and every drive, we were in the huddle, even during TV timeouts, saying, 'Let's make some plays, let's make some plays.' "

Up to that point, Cowboys coach Bill Parcells had devised a pretty good scheme to stop the NFL's top-rated offense. Dallas had cornerbacks play five yards off the line of scrimmage but front Seahawks receivers aggressively, mostly in man coverages. Why not? Starters Bobby Engram and Darrell Jackson were out with injuries and Joe Jurevicius finished the game on the sideline hurt.

For the game-tying, 81-yard drive, Hasselbeck's targets included late addition Peter Warrick, former practice-squad player Jerheme Urban and raw second-year receiver D.J. Hackett. In other words, the Seahawks were relying on three seldom-used targets. Hasselbeck treated them like starters. He hit Urban for 22 yards. Against an all-out blitz, he hit tight end Jerramy Stevens for another 22, putting the ball at the Cowboys 37 with 1:52 left.

A holding penalty against right tackle Sean Locklear didn't deter the drive. Remember, this Seahawks team has each other's backs. They got a break when Aaron Glenn, playing aggressively as Cowboys cornerbacks did all day, was called for pass interference, setting up a Seattle first down at the Dallas 25.

Alexander, held to 61 yards on 21 carries, broke an 11-yard run to the Cowboys 14 and Hasselbeck hit Hackett at the 1 with a sideline pass. Two plays later, tight end Ryan Hannam caught a 1-yard touchdown pass to tie the game with 40 seconds left.

"We changed our personnel groupings," Holmgren said. "We threw the ball down the field. We didn't have a lot of choices left. And the guys made plays. We dropped a couple of balls today and we hadn't dropped passes in the first few games. As the saying goes, you just keep chopping wood and pretty soon something good will happen. That's kind of what happened. We attacked them down the field just a little bit more during that drive."

Following the touchdown, Tyson Thompson returned a kickoff to the Seahawks 41 with 33 seconds left. All the Cowboys needed was two first downs to have a chance to kick a field goal. A holding penalty cost them dearly. Rob Petitti, the rookie right tackle, drew a holding penalty, setting up a second-and-14 from Dallas' 37. Drew Bledsoe threw a 7-yard pass to Terry Glenn, setting up what turned out to be the play of the game.

The Seahawks went into a four-deep zone. Safety Jordan Babineaux had the left quarter of the field, and Glenn was coming at him on the next play. Babineaux read Bledsoe and sensed the ball was coming to him. He intercepted the pass and ran it back 25 yards to set up Josh Brown's game winning field goal from 50 yards.

Another difference in this year's Seahawks: Brown, who had a potential game-winning kick hit the upright and bounce left in a loss to the Redskins earlier this season, had been preparing for a field goal even though the Cowboys had the ball. Something inside gave him confidence. When he saw Babineaux go out of bounds at the Cowboys 32, he trotted on the field with confidence.

"The moment I hit it, I knew I was about to get bombarded by my teammates," Brown said. "I took off my helmet. That way they couldn't throw me to the ground. There is a little planning in there. That happened to me in college and I got trampled on."

The Cowboys couldn't believe it. The defense had dominated the Seahawks all afternoon. Alexander said it looked like a family reunion in the middle of the field everytime he touched the ball. Hasselbeck was pressured and hit. The offensive line had trouble containing the physical Cowboys defensive line.

Bledsoe lamented that he didn't throw the ball high enough or far enough to avoid Babineaux. Parcells and wide receiver Keyshawn Johnson talked about not putting away the Seahawks when they had chances. Cortez missed a 29-yard field goal. The Cowboys settled for a field goal on their last scoring drive after they had driven to the Seahawks 3.

"It's very frustrating that we had it and then we lost it," Cowboys safety Roy Williams said. "We just let it slip through our fingers. Football is determined on, when all the seconds are gone, who wanted it more. Seattle made the plays. End of story. They wanted it more."

Yes, this version of the Seahawks is different that the past. They want it, and they have enough tenacity to win these games.