As the Eagles await Richard Bloch's ruling on Terrell Owens, the next team willing to sell its football soul should remember something. If you gamble on a move that could tear up your locker room, you better win the Super Bowl.

Disaster has followed the past five teams (including the Eagles) that lost the Super Bowl. Since the 2000 season, each Super Bowl loser has followed that performance with a losing season. That's right. They haven't just missed the playoffs, they've actually had losing records.

The post-Super Bowl blues for the losing team has been amazing. The 2000 Giants went from 12-4 to 7-9, and eventually Jim Fassel lost his job as head coach. The 2001 Rams went from 14-2 the year they lost the Super Bowl to the Patriots, to 7-9 the following year. The 2002 Raiders dropped from 11-5 to 4-12 and eventually Bill Callahan lost his job. The Panthers lost to the Patriots after an 11-5 season and had a 1-7 start in 2004. They rallied to finish 7-9 and have bounced back to be 7-2 this year, but after losing the Super Bowl, the Panthers' season was marked by a lot of injuries and no playoffs the following year. 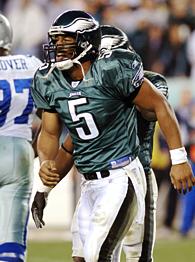 The Eagles, who are 4-5, still have time to salvage a .500 or winning season. But the chances don't look good with Donovan McNabb contemplating surgery that would end his season and the offense heading into the final seven games with Mike McMahon at quarterback, no running game and no Owens.

It's still hard to believe the Eagles' collapse. For four years, they have been the best team in the NFC. They were seven games better than anyone else in the NFC East last year at 13-3. The average age of the Eagles players was 26.17, almost a half-year younger than the 2004 roster. Yet without McNabb for the rest of the season, they seem destined for a losing record. Remarkable.

Someone will sign Owens after he is released by the Eagles in late March. He's a Pro Bowl receiver. Some coach will decide, much like the Eagles did, that Owens is the missing piece to a Super Bowl run. That's football. That's sports. Owens can be unstoppable on the field. But as good as he is on the field, he can tear a locker room apart.

The key for a team vying for a Super Bowl is to know thyself. Often, Super Bowl runs are combinations of luck and solid play. Easy schedules help. Good teams that slip through the season without too many major injuries can get to the Super Bowl. Home-field advantage or getting a bye in the playoffs sometimes can be the difference.

Knowing thyself is hard for teams that lose in the Super Bowl. The championship goes to the winning team, not the loser. Although going to the Super Bowl is a great accomplishment and the experience of a lifetime, it doesn't mean that the Super Bowl loser is really a Super Bowl team.

Teams that lose in the Super Bowl share four main similarities -- schedule, age, injuries and personnel decisions. The Super Bowl chase is a mad rush. Fans and players get wrapped up in the elation of going to the Super Bowl and they should. It's a great experience. But the loser often enters a quick period in early February in which decisions come fast and furious, often without enough time to make the right ones.

The 2000 Giants took advantage of the league's fifth easiest schedule (against teams with a combined record of 114-142) and had great coaching, finishing the year 12-4 and winning the NFC Championship. They hoped to squeeze another year out of an old offensive line in 2001. But Lomas Brown wore down, Glenn Parker struggled, and Dusty Ziegler got hurt. The key free-agent addition of the offseason, defensive end Kenny Holmes, didn't work out, and the Giants turned out to be average in 2001 at 7-9.

In 2002, the Rams were hit hard by Kurt Warner's bouts with injuries and dropped out of the playoffs. One trend in the 2000s has been that any drop off in play at the quarterback position can turn a have into a have-not.

The Raiders' fall from grace actually started on the eve of the Super Bowl when OG Barrett Robbins went AWOL down to Mexico. The Raiders didn't think they needed to keep Tory James, who has since helped turn the Bengals into a winning defense. They kept an aging Jerry Rice and Tim Brown as their starting receivers, which robbed the passing offense of downhill speed. More than anything, Rich Gannon got banged up. He was hit hard in Oakland's first game and was injured by their sixth game. The Raiders went from the Super Bowl into a black hole at 4-12.

Because of the salary cap, every team has to make tough decisions. That was the story of the 2004 Panthers. The Panthers didn't want to stay too long with aging offensive line, so they jettisoned tackle Todd Steussie and brought in Adam Meadows from Indianapolis to handle the right tackle job. Meadows retired before training camp ended. The price of going to the Super Bowl raised the prices of free agents. Guard Jeno James, safety Deon Grant and cornerback Reggie Howard received better offers from other teams and they left.

Then, the Panthers lost Kris Jenkins, Steve Smith and other key players to injuries at the start of the season. Carolina stumbled out of the gates to a 1-7 start. That John Fox was able to lead the Panthers to wins in six of the final eight games shows his value as one of the league's best coaches. It also shows that the Panthers' Super Bowl run was no fluke because they are back in the mix this year.

The Eagles' fall is a tough one. Like past Super Bowl losers, the Eagles thought they had greater depth than they did. They let Derrick Burgess go to the Raiders, believing Jerome McDougle or N.D. Kalu would step in and fill the void. Burgess is having a seven-sack, Pro Bowl year with the Raiders. Meanwhile, McDougle was the victim of an offseason shooting and hasn't played at all, and Kalu has been just a decent backup.

Letting Corey Simon go for no value was also a mistake. His presence along the Colts' defensive line could be Indy's ticket to the Super Bowl. Losing Simon, without an immediate replacement, not only took away one key starter from the defensive tackle position, it also made the position very thin when Darwin Walker and others sustained injuries.

Like other Super Bowl losers, the Eagles have had a long list of serious injuries -- Hank Fraley, Todd Pinkston, Paul Grasmanis, Correll Buckhalter, Dirk Johnson, McNabb and others -- to deal with.

No one should take away the thrill and honors that go along with a Super Bowl run. But the history of Super Bowl losers dropping off the next year has gone back a long way. The salary cap era makes it hard to keep teams together. Free agency rewards the players on those winning teams.

The team that signs Owens next year needs to realize one thing: They better be good enough to win the Super Bowl, not just get there and lose. If not, a nonplayoff season and some serious headaches will likely follow the next year.