Raw talent in professional sports can be a dangerous tease.

The Bengals are just the latest franchise seduced. After more than a decade of futility, the Bengals became a player in the NFL, thanks to the vision of head coach Marvin Lewis. Lewis updated a franchise that fell ridiculously behind in the times. He weeded out malcontents. He brought in veterans from winning teams as leaders. His credibility around the sport has allowed Cincinnati to become more of a factor during free agency.

The Bengals won the AFC North last season with 11 victories and should be a regular playoff contender as long as they keep quarterback Carson Palmer healthy. But to get to the next level, the organization has fallen victim to the tease of raw talent. In the past 17 months, the Bengals used five draft choices -- including one second- and three third-rounders -- on players with questionable character, and some who have since had run-ins with the law.

The Bengals have rolled the dice with their drafting practices and there are plenty of unknowns. Will there be more suspensions in the next year? Can teammates count on these players in crunch time? When will the fans tire of the negative stories? How much of a distraction will future problems cause?

Wide receiver Chris Henry, drafted in 2005, has been arrested four times in the past year. Middle linebacker Odell Thurman, also an '05 draftee, was suspended for four games last week because of violations of the substance abuse policy. Their third-round choice this year, defensive end Frostee Rucker, was charged last month with two counts of spousal battery and vandalism. Fifth-round choice A.J. Nicholson, who had a history of off-field problems at Florida State, was charged last month with burglarizing the apartment of a former teammate.

On Thursday, the Bengals used next year's third-round choice on linebacker Ahmad Brooks, who had three reported marijuana incidents and other problems at Virginia. Though considered a first-round talent, Brooks was available because Virginia kicked him off the team.

Not since the heyday of the NBA's Portland Jail Blazers has a franchise defied the character questions this much. The Trail Blazers kept drafting lottery picks with character problems. Fans became outraged at the constant headlines of arrests and misdeeds and turned on the team. You remember the jokes. Their team charter was ConAir.

The Bengals have put themselves on the same mantel for criticism. Team president Mike Brown, who was silent through the offseason of turmoil, responded to the calls for explanations by issuing the following statement Friday: "We want our fans to know that we share their concerns regarding the recent off-field conduct of several Bengals players. We expect our players to be good citizens, as most are, and we hold them accountable for their conduct under team and league rules. We are closely monitoring these matters. All are currently pending and they will be addressed in accordance with the NFL Collective Bargaining Agreement, including possible disciplinary action."

Most insiders believe Brown ultimately endorsed the selection of Brooks even more than Lewis. The Bengals' gambles on athletes with character issues predates Lewis' hiring. Wide receiver Carl Pickens was a constant drain on the organization because he kept demanding to get out in a trade. He eventually dragged down the attitude of a young receiver, Darnay Scott. Corey Dillon had his problems in Cincinnati, and Lewis moved him to New England in a trade.

Some of the Bengals' woes might be a product of having one of the league's smallest scouting operations. Coaches help out more in scouting future Bengals than most other teams, and Brown views talent acquisition in simple terms: You need good players.

Problem is, some of these good players have put themselves in bad situations. Last week, the Bengals found out Thurman will miss the opening four games because of his suspension. The Bengals needed another linebacker. Brooks was more talented than any veteran free agent, and the cost was only a third-round draft choice. Brown had no problem selecting Brooks.

But it's up to Lewis to make it work, and therein lies the problem. Locker room chemistry is a tricky science. Trust is important. Can five players with questionable pasts be counted on in tough times? If they can't, problems will develop.

Look at the Thurman situation. The second-round choice from Georgia was one of the reasons for the Bengals' success last season. Though he had a history of problems, Thurman took over a leadership role on defense and gave the defense a much-needed spark. Now he's out for what might be the most critical month of the 2006 season. 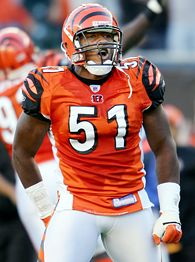 The Bengals take on the Chiefs, Browns, Steelers and Patriots in the first four weeks. Each team has a good running attack, and Thurman won't be there to play. Once he returns from his suspension, he will have to win back the confidence of his teammates. That won't be easy if the Bengals get off to a 1-3 start. Finger-pointing could start, and Thurman will be an easy target.

The cure for team disharmony is winning. The Super Bowl ring can turn the worst of locker rooms into family, but locker rooms with problems need that type of success to survive. That will be Lewis' toughest task. If the Bengals can't do better than the first round of the playoffs, he will have to heal those wounds in the locker room.

Consider the Henry situation. Henry had a firearms charge in January. He pleaded guilty to marijuana charges in March -- stemming from the January arrest -- and was arrested in April for providing alcohol to underage girls. In June, he had a driving while under the influence charge. Were it not for enhanced player protection in the new collective bargaining agreement, Henry might have been released.

Lewis came out this spring and addressed the off-field problems. He handled it in his usual, well-thought-out approach that has made him a head coaching success. Lewis said the players involved in those incidents had no standing on the team and would have to win their jobs in camps.

Henry plays an important role in the offense. He's a talented third receiver. He caught 31 passes as a rookie and scored six touchdowns. He moved ahead of Kelley Washington, who was another talent who hasn't shown the consistency to be the third receiver. If Henry is cut or demoted, the Bengals will have to rely on former Packer Antonio Chatman as their third receiver.

The Trail Blazers are an interesting parallel to the Bengals. For a long time, the Blazers were successful. They made the playoffs. The Rose Garden was sold out. But the more problems became attached to the players, the more the fans grumbled. Many blamed character for the team's inability to get over the top.

Lewis' job just became tougher because of the characters drafted in the last 17 months. He has to convince these players to be on their best behavior. He has to make them accountable for their acts. In that tough environment, he has to start taking the team deeper into the playoffs.

The Bengals have rolled the dice with their drafting practices and there are plenty of unknowns. Will there be more suspensions in the next year? Can teammates count on these players in crunch time? When will the fans tire of the negative stories? How much of a distraction will future problems cause?

The Bengals finally have become a winning franchise, but this flurry of drafting players with shaky pasts has made the foundation a little less stable.