ST. LOUIS -- Although the Chiefs would love to have offensive leader Trent Green back, Damon Huard has turned Kansas City into a playoff contender in Green's absence.

Coach Herman Edwards already has gone on record as saying Green, out since Week 1 after suffering a concussion, will start when he's healthy. Following Sunday's 31-17 victory over St. Louis, Green said he's targeting the Nov. 19 game against the Raiders. That buys Edwards time to make what Huard has turned into the toughest decision in his first year as Chiefs head coach. Benching a hot Huard will be an extremely difficult decision for Edwards. 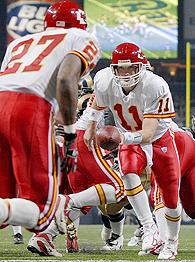 In 1997, Chiefs coach Marty Schottenheimer faced a situation similar to the one Edwards faces in the coming weeks. Elvis Grbac was the starting quarterback that season, but he suffered a broken collarbone. Rich Gannon came off the bench and won games. The Chiefs finished 13-3 and secured homefield advantage, but Schottenheimer went back to Grbac, and the result was disastrous.

The Chiefs were upset in the first round of the playoffs by the Broncos, and Gannon left in free agency the next year to turn the Raiders into a playoff contender and eventual Super Bowl participant.

"One rule says you don't lose your position with injury," Chiefs tight end Tony Gonzalez explained diplomatically. "Whatever they do, we've got to go with it."

The Green-Huard debate is tougher than Grbac-Gannon. Grbac wasn't much of a leader, although he was a talented thrower. Gannon was an aggressive leader who demanded the most of his players. Green and Huard are the nicest people you'll meet in sports. Everyone in the Chiefs' locker room loves both guys. Players believe in them. So, you ask again, how can you bench Huard?

He's 5-2 as Green's replacement. His stats are unbelievable -- a 105.2 quarterback rating, 64.5 percent of his passes completed, 11 touchdown passes compared to one interception. On the field, he's a fiery leader.

Everything Huard throws is catchable, and thanks to his excellent game-management skills and a resurgent Larry Johnson, he does not have to throw a lot. In the Chiefs' win Sunday, Huard needed only 15 throws. He completed 10, three for touchdowns.

In the second quarter, with the Chiefs leading 7-0, Huard made the Rams pay for their sloppiness. Chiefs defensive end Jared Allen stripped the ball from Marc Bulger at the Rams 46. On the next play, Huard hit Samie Parker with a perfectly thrown 43-yard pass to the Rams' 3-yard line. Huard hit Gonzalez with a 3-yard touchdown pass on the next play.

"I think that gets your confidence going and certainly it softens up the coverage when you hit that big play," Huard said. "Samie did a nice job of getting separation, and he made a nice play on the ball for me. It got the offense going and the confidence going. I am not sure we had any passing yardage until that play. It was a big play for us. When you hit those plays, it helps you run and vice versa."

Huard threw only one pass, an incompletion, in the first quarter. A lot of things were happening that would have caused other quarterbacks to panic. With four minutes left in the first quarter, All-Pro guard Brian Waters went down with what initially looked like a serious knee injury. After the game, Waters said the injury wasn't too serious, although he likely will miss a couple of weeks.

"I've always believed in myself. I've been asked that question [if he's surprised himself] a lot. You just keep fighting and keep hanging in there and hoping I get one more opportunity in my career, and I'm very fortunate I did. I just wanted to keep this team going. I have a lot of good players around me."
Damon Huard, Chiefs QB

The Chiefs had only seven offensive linemen on their active roster. Kyle Turley filled in for injured Kevin Sampson at right tackle. Chris Bober replaced Waters at left guard. John Welbourn, just off the commissioner's exempt list following a suspension, was the only other available blocker, and he helped out at both tackle spots. Rusty in his first game, Welbourn was beaten for two sacks.

"I wasn't worried," Edwards said. "I had to get the next guy in. I don't worry too much. The first game of the year, the quarterback went down, so you can't get worried. The next guy has to go in, and you don't worry about that. Hopefully, Brian will be back sooner than later, but we'll see where it's at."

Huard kept things calm in the huddle. He's been around 10 seasons, playing behind Dan Marino, Tom Brady and now Green. Until he replaced Green in Week 1, Huard had only thrown one pass in a game since 2000. He had only six starts prior to this season.

"I've always believed in myself," Huard said. "I've been asked that question [if he's surprised himself] a lot. You just keep fighting and keep hanging in there and hoping I get one more opportunity in my career, and I'm very fortunate I did. I just wanted to keep this team going. I have a lot of good players around me."

Where Huard has excelled is getting the ball to his playmakers. His accuracy has allowed him to work perfectly with Gonzalez, who has 38 catches for 504 yards. Once he establishes Gonzalez in games, things open up for Parker, Eddie Kennison, Kris Wilson and others.

"It is all about winning," Huard said. "When the team wins, you feel good. I think when you win games on the road, you gain confidence. That is what we did today. We hope to carry that to the game next week against Miami."

"Even if you go 5-3, you still have got to win games," Edwards said. "We talked about that last night. You can use stats however you want to use them, but you're right. Sixty five percent of teams when you are 5-3 have a little bit of an edge, but you still have to win games. It was more important for us to win a road game against a winning team that obviously plays well here."

Edwards won't have to worry about who's playing behind center for now as Huard continues his magic carpet ride.