DENVER -- During the Broncos' back-to-back Super Bowl run in the 1990s, a Denver columnist dubbed Mike Shanahan "The Mastermind."

Everyone who came across Shanahan knew he was brilliant. Al Davis hired him early in his career but made the mistake of firing him in his second year with the Raiders. Shanahan ended up calling plays for the 49ers and gained a reputation as a great play-caller before the Broncos named him head coach in 1995. With John Elway as his quarterback, Shanahan figured he should put 40 points a game on an opposing defense. His standards were high.

Well, the old Mastermind has pulled off another brilliant move. By going down the stretch with rookie quarterback Jay Cutler and a cast of other rookie offensive players, the Broncos appear set to enter the AFC playoffs as one of the wildest of the wild cards. Though they needed a bad extra point snap by Brad St. Louis of the Bengals to seal their 24-23 victory in the final seconds, The Mastermind is back in the playoff saddle again, and the Broncos will only be better in future years with Cutler at the helm. 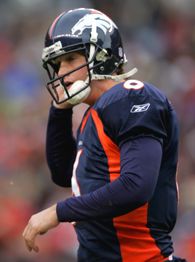 Cutler isn't John Elway but he might be the next best thing. His stats didn't reflect how huge he played in this game. Though he was 12-for-23 for 179 yards and two touchdowns, Cutler did some Elway-like things.

For one, he executed a 99-yard touchdown drive in the third quarter. Elway was known for those long, game-winning drives in the playoffs. The pressure was on the Broncos, who almost fell out of the playoff hunt in making the quarterback transition from Jake Plummer, and Cutler responded when he needed to, even though he was competing against Carson Palmer.

But in many ways, Cutler did outplay Palmer. He opened the game with a dumb interception, but with Cutler everything is a learning experience. After all, this was only his fourth start. Cutler thought he could get the ball deep to tight end Tony Scheffler so he pumped once and pumped again.

Shanahan later reminded him that the NFL is different than Vanderbilt. Defenders are too quick. Double pump and you can't go deep because the defender will intercept the pass. Safety Dexter Jackson did just that at the Broncos' 5. In then future, Cutler will throw the 4- or 5-yard completion.

What impressed Shanahan was Cutler's demeanor after the play. "By the time I was running off the field, the play was out of my mind," Cutler said. That's what the great ones do, they forget the mistakes and dwell on what will make them better."

Watching Cutler on Sunday proved he has the present and the future solidly in control.

His big time plays were Elway-like plays, something Broncos fans have been waiting for since his retirement. It was never more obvious than on two big time throws Cutler made in the first half.

The first came in the second quarter when the Broncos tried a trick play. Rod Smith took a direct snap from center. He heaved the ball to his left to Cutler, who rifled a ball that exploded from his hand into the waiting hands of rookie Brandon Marshall 36 yards downfield. It set up a 1-yard touchdown pass to Scheffler.

After Cincinnati's Chad Johnson fumbled a completion, Cutler made him pay a little more than a minute later. Broncos receiver Javon Walker made a double move that allowed him to get past Jackson and into the end zone. Cutler fired a laser to him for the 39-yard touchdown that gave the Bengals a 14-7 lead. With that, Cutler also set a NFL rookie-record by having multiple touchdown passes in his first four games as a starter. He has eight TDs for the season.

In the second half, the 99-yard drive won the game. The Broncos trailed, 17-14. Kyle Larson placed a perfect punt that was downed at the 1-yard line. Put any rookie quarterback in a big game at his 1 and you have problems. Not Cutler.

His biggest play was a 25-yard completion to Scheffler when he saw a blitz coming. Cutler had enough time to put air under the ball as Scheffler was going downfield against a linebacker and it took the Broncos to their 41. Once again, Cutler had Denver rolling.

The combination of Mike Bell and Tatum Bell took a little pressure off Cutler, but he still made enough throws to keep drives going.

An interference call against Bengals rookie corner Johnathan Joseph helped. It turned a third-down incompletion at the Bengals' 21 into a first down. Cutler converted a third-and-11 into a 17-yard completion to Walker and set up a first-and-goal at the 2. Mike Bell scored two plays later.

Shanahan had been thinking all season about the time to unleash Cutler. He came to the conclusion early that it was going to be hard for Plummer to take this team deep into the playoffs. Once Plummer suffered back-to-back losses to the Chargers and Chiefs in a five-day stretch around Thanksgiving, Shanahan made the change.

Cutler was like all other rookie quarterbacks and wasn't very good in his first start. The Broncos lost to Seattle. But each week he improves, and each week the Broncos are winning with a younger cast of players.

Mike Bell, an undrafted rookie, is taking over the halfback role for Tatum Bell, who makes big plays but fumbles too much. Brandon Marshall has moved into the No. 3 receiver role in the three-receiver set and is making more big catches each week. Erik Pears is a first-year left tackle filling in for injured Matt Lepsis. Scheffler seems to have the confidence of Cutler even though Shanahan was putting him on the inactive list just a few weeks ago.

"I roomed with Tony during the preseason and he has great hands," Cutler said. "A tight end like that can stretch the field."

At 9-6, the Broncos control their own destiny. If they beat the 49ers next Sunday in Denver, they are the AFC's fifth seed. To think, Shanahan did it with a cast of rookies. That's why they call him The Mastermind.