Everyone around San Diego and the NFL knew the Marty Schottenheimer-A.J. Smith relationship was destined to explode. The Chargers had a ticking time bomb of discontent that finally blew up Monday night when the coach was fired. 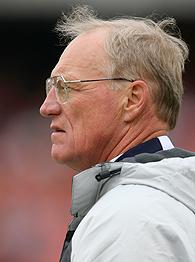 Despite those problems, the Chargers went 14-2 last season with 15 players who were either selected to the Pro Bowl or named as alternates. Now, with 31 coaching staffs mostly filled and most organizations shifting their attention to free agency, Smith and the Chargers are scrambling to find a head coach and a staff.


The Chargers were down five key assistants. After San Diego's playoff loss to the Patriots, Chargers owner Dean Spanos spent three days trying to decide whether to keep Schottenheimer, who was entering the final year of his contract. He offered him a one-year extension at $4.5 million. Schottenheimer wanted more security than that and said no. Spanos decided to stay with Schottenheimer, who has 200 regular-season wins, knowing he had one of the most talented coaching staffs in the NFL.


The landscape changed for Spanos after the departure of the five coaches, including two coordinators. Schottenheimer and Smith weren't going to get along. Without the assistants, Schottenheimer apparently wasn't as appealing to Spanos.