Sometimes nice guys can finish first. Certainly, that's the case in San Diego, where Norv Turner was hired to take over the Chargers.

After two horrible years as head coach in Oakland -- a job a lot of his friends tried to talk him out of taking -- Turner was a finalist for two dream jobs this offseason in Dallas and San Diego. The Cowboys job was appealing because he had a great run there as the offensive coordinator from 1991-93. Troy Aikman liked Turner so much he had Turner present him when he was enshrined in the Pro Football Hall of Fame.

Losing out to Wade Phillips for the job in Dallas had to be a big disappointment, but Turner was still in a comfortable spot. The 49ers valued him so much as an offensive coordinator and mentor for Alex Smith that they offered him a lucrative contract extension before he interviewed for the Cowboys job. Once he returned from Dallas without the job, they still gave him the extension. 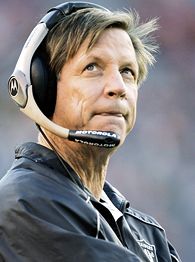 Then the Chargers job opened up. You could make a case that it's one of the best NFL head coaching jobs to become available in the past decade. The Chargers finished 14-2 last season with a roster that included 11 Pro Bowl players and four Pro Bowl alternates. The team was so blessed with talent at quarterback that it might have actually upgraded when it let Pro Bowler Drew Brees go last offseason and replaced him with Philip Rivers. With longtime Turner understudy Cam Cameron calling the plays, the Chargers were the league's highest-scoring offense with Rivers in charge in 2006.

After a number of turbulent years in which general manager A.J. Smith and coach Marty Schottenheimer just couldn't find a way to get along, the Chargers were looking for a nice guy who won't make waves. Turner is the perfect choice. In San Francisco, people in the office refer to him as Uncle Norv. Turner is such a nice guy, office employees and players loved coming by his office just to enjoy his company and conversation.

Smith must be credited for putting together an impressive list of six coaching candidates, interviewing them all in one week and making a decision before the start of this week's scouting combine in Indianapolis. In the end, it was easy to figure the thinking of Smith and owner Dean Spanos. Both weighed whether to hire a defensive head coach or go with Turner's expertise on offense.

It was interesting that the five other candidates are defensive coaches -- Rex Ryan (Baltimore), Gary Gibbs (New Orleans), Mike Singletary (San Francisco), Ron Rivera (Chicago) and Mike Zimmer (Atlanta). From that group, Ryan was probably the leading candidate. Ryan coaches an aggressive 3-4 defense in Baltimore and is the closest thing to Wade Phillips as far as personality and the way he deals with players.

But Turner has the head coaching experience that Ryan lacks. That had to play a big part in Smith's final decision. Plus, Turner appears to be willing to bring in a longtime Smith favorite -- Ted Cottrell -- as his defensive coordinator. Cottrell has experience with the 3-4 defense, so he's a natural fit.

Turner takes over a team that is clearly ready to compete for a Super Bowl. He's clearly the best choice to get even more out of Rivers. Look what he's done in San Francisco with Alex Smith. Certainly, the expectations will be high for Turner in San Diego. The team won 14 games last season. Fans will be expecti nothing short of a conference championship and a trip to the Super Bowl.

There is no question, though, that the coaching staff and front office will get along. Uncle Norv has opened up shop, and his door is always open.