INDIANAPOLIS -- David Carr hasn't avoided many sacks during his five NFL seasons, but so far he's avoided being sacked by the Houston Texans.

Although the Texans haven't given up on the idea of trading Carr, general manager Rick Smith and coach Gary Kubiak gave Carr an endorsement as the Texans' starting quarterback for 2007. But those endorsements were about as shaky as Carr's pass protection.

"David Carr is our quarterback, and frankly, I'm interested in David playing better and performing more consistent and improving our offense," Smith said. "There has been so much rumor and innuendo right after the season. There were some clubs who were curious if, in fact, he was available. So I did take a couple of calls." 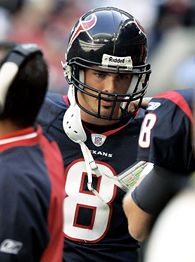 Since that time, though, the calls have quieted down. Smith said Carr could be had if the right trade came up, but the market for Carr hasn't developed.

It has been speculated that the Texans might be willing to take a third-round choice for Carr, a price that might be considered a bargain for a 27-year-old quarterback taken at the top of the draft just five years ago. But listening to Smith speak Thursday at the scouting combine, a third-rounder might not be enough.

"I think you improve your team a couple of different ways," Smith said. "You get players on your team to play better and perform better and coach them hard. Or you go out and acquire other players. If we can acquire something in a trade for David that would make sense for us to improve our football team, we will entertain that."

A third-round pick for a team that is coming off a 6-10 season and has a 24-56 record over its five-year history won't lead to any rapid turnarounds. The Texans are tired of losing and so is Carr. But Carr is content to stay in Houston if the Texans want him. He has three years remaining on his contract. Smith has talked to Carr's agent, Michael Sullivan, and Smith said Carr and Sullivan understand the situation in Houston.

The Texans want to win now and are looking to make moves that will make them more competitive in the AFC South. Moving Carr isn't going to net a boatload of draft choices or players, and the Texans clearly need players. If no deal can be made, the team will be content to stay with Carr as its starting quarterback.

One option that seems to be stalled at the moment is a trade for Broncos quarterback Jake Plummer. Plummer, who was close to Kubiak in Denver, has been replaced by Jay Cutler as Denver's starting quarterback. Though Kubiak and Broncos coach Mike Shanahan are close, a Plummer trade doesn't appear to be close to happening.

Smith, in fact, wouldn't talk about Plummer on Thursday because he is property of the Broncos.

"It hasn't quieted down with the media," Smith said of the Carr trade rumors. "I only talked to a couple clubs about him. I don't know if there is going to be any interest. The interest is generated more by the media than anything. David is our starting quarterback. We're excited about him playing in his offense."

Around the combine
• Ohio State wide receiver Ted Ginn Jr. isn't sure when he will be able to run for NFL teams. He just hopes to be able to show his speed before the April draft. Ginn is considered one of the fastest receivers in the draft, but he hasn't been timed in the 40 in years. He suffered a sprained foot in Ohio State's BCS title-game loss to Florida. "I have a midfoot sprain," Ginn said. "It's kind of like a high-ankle sprain. It's going to take a lot of rehab and a lot of rest to come right back." Ginn isn't working out at the combine and may not be ready for his Ohio State workout.

• The timing of the Raiders' decision not to pay Aaron Brooks' $5 million roster bonus was interesting. The Raiders are preparing to watch LSU quarterback JaMarcus Russell throw at the combine. Andrew Walter is the only quarterback with experience on Oakland's roster, so it seems to be a sure thing that Russell will go to the Raiders as the first pick in the draft.

• The Texans don't know whether running back Domanick Williams (formerly known as Domanick Davis) will be healthy enough for the 2007 season. Williams missed last season with a knee injury. Williams has worked hard to make a comeback, but Smith said there is uncertainty. The more he worked last year, the worse the knee got. "The rehab process is in the strengthening phase," Smith said. "The knee has responded great, but there is still some uncertainty there." Many people around the Texans hope Oklahoma halfback Adrian Peterson falls to the No. 8 pick in the draft, but that's unlikely.

• The biggest surprise of the day was the Ravens' decision not to franchise linebacker Adalius Thomas, who could be off to Cleveland or San Francisco for big dollars. The Ravens have 10 free agents and could lose a bunch of them. Though they vow to negotiate with their top free agents, the Ravens could lose Thomas, right tackle Tony Pashos, defensive tackle Jarret Johnson, fullback Ovie Mughelli and running back Musa Smith.

• Saints coach Sean Payton doesn't seem to be concerned about the postseason injuries of Drew Brees and Reggie Bush, who were hurt in all-star related games. Brees dislocated his left elbow in the Pro Bowl, while Bush sprained an ankle in a celebrity basketball game at the NBA All-Star game. Brees' recovery time is six to eight weeks. Bush is only going to be down a couple of weeks. Payton, in fact, said the Saints are adding a basketball court to the team's practice facility because he knows his players will play pickup games, and he'd rather have them play on team property.

• The sticker shock of paying the Bears' coaching staff is one of the reasons for the slow negotiations on Lovie Smith's contract. The Bears gave special teams coach Dave Taub a three-year contract that averaged around $425,000, a raise of over $100,000 a year. Taub's new salary isn't that much less than what Ron Rivera was making as defensive coordinator. Smith wants to see his average jump from $1.35 million to around $5 million. The entire coaching payroll for the Bears in 2006 was less than $6 million. This one will take time.

• Bills coach Dick Jauron has more than $30 million of cap room. "I do think we will be competitive in the market," Jauron said. But how competitive? The Bills won't be able to compete for the big dollars going to cornerback Nate Clements, considered perhaps the top free agent this year.

• Most people around Indianapolis believe the Redskins will get a deal done quickly with Bills middle linebacker London Fletcher. The Redskins were hurt a couple years ago by the loss of middle linebacker Antonio Pierce, who left for the Giants. Fletcher isn't expected to be re-signed by the Bills. The Redskins don't have the cap room to sign Clements, but most believe Fletcher will head to Washington and reunite with former Bills head coach Gregg Williams, the Redskins' defensive coordinator.

• The interesting part of the Redskins' release of safety Troy Vincent is that Vincent requested it. Though it might have been considered a cap move to save the Redskins $1.54 million, Vincent asked to be let go. He wanted to move to a different team that could offer him more playing time. Vincent is 35.

• Mike Martz made an interesting hire for his offensive coaching staff in Detroit. The Lions' offensive coordinator signed his son, Tim, to be an offensive quality control coach.

• Falcons defensive end Patrick Kerney will avoid being franchised by waiting until Friday to submit his papers to void the final two years of his contract. Kerney is giving up $6.7 million in base salary this year with the Falcons, but he hopes to get more than $7 million per year on the open market. The Broncos might be one of several interested teams.

• Even though Jeff Garcia is a viable candidate to go to Tampa Bay, the bigger money deal could end up in Philadelphia, which would allow him to stay as Donovan McNabb's backup.