After two seasons of settling for free-agent bargains, the Patriots started shopping for big-ticket items and Moss -- like him or not -- will be one until he retires. That's what happens when the Patriots, despite having one of the game's top quarterbacks in Tom Brady, dropped into the middle of the pack in terms of offensive explosiveness. They ranked 11th in total yardage and 17th in average yards per play. Moss and Donte' Stallworth are threats for long touchdowns every time they run down the field.

Yet, the moves that could open up offenses often go unnoticed. A day before the Patriots traded a draft fourth-round pick for Moss, the Indianapolis Colts made a subtle move. They used a first-round pick on Ohio State wide receiver Anthony Gonzalez. For Colts fans who thought general manager Bill Polian would draft defense, they were surprised by the selection of Gonzalez. 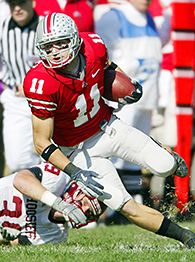 Gonzalez's acquisition might not draw the attention of the Moss move, but it can be every bit as important. The reason is Gonzalez plays the slot in three- or four-receiver threats. The slot receiver might not be as sexy to fans as split end or flanker, but the role can't be minimized.

"The last time we had that kind of threat from the slot was when Brandon Stokley was healthy in 2004," Polian said. "That was the year Peyton Manning threw 49 touchdown passes."

The St. Louis Rams, under their former offensive coordinator and head coach Martz, had great success when Az-Zahir Hakim learned how to work the slot. Though he never caught more than 53 passes in a season, Hakim, more quick than fast, understood pass routes and ran them well. Kurt Warner was an accurate passer and could get the ball out to Torry Holt and Isaac Bruce, who worked the outside. The threat of Hakim in the middle drew double coverage from Bruce and Holt.

It should come as no surprise that the Patriots -- an equally smart organization -- realized the value of the slot position. Even though there was plenty of quality depth at receiver in the draft -- 17 receivers were drafted in the first three rounds -- the Patriots traded second- and seventh-round choices to the Dolphins to acquire Wes Welker. Welker will be the Patriots' Stokley and will try to work the middle of the field from the slot.

The slot receiver always has been important in offenses, but the Patriots and Colts are taking the value of that position to new levels. Welker's success is vital to the Patriots' offense because if he can catch 60 passes, he will open up single coverage on the outside for Moss and Stallworth. Given Brady's accuracy, it's not out of the question for Brady to approach a 40-touchdown pass season and compete with Manning for passing records.

But Gonzalez could have an even bigger impact. First of all, he runs much faster than Hakim, Stokley and Welker, who barely runs a 4.7 40. The former Ohio State receiver runs a 4.4 40. Think of the matchup problems. Unless a team puts a corner with comparable speed on him, Gonzalez could get past safeties and be open down the middle of the field for touchdowns. While directing the Rams, Martz used the sneaky fast Kevin Curtis to work the slot. In several games, Martz drove Seattle Seahawks safeties crazy by having Curtis run right toward them and getting the safety out of position with a quarterback play-fake.

Last year with the Lions, Martz had Mike Furrey work the slot for an NFC-best 98 catches. But Furrey lacks the speed of Gonzalez. Gonzalez adds a new dimension to the slot receiver because he's so fast. Plus, he's smart and is able to read coverages on the run. He's going to play a major role in the Colts' offense.

Moss, Stallworth and Welker were great acquisitions to the Patriots' receiving corps. Last season New England paid a costly price -- falling in the the AFC title game at Indy -- for losing Deion Branch and David Givens to a trade and free agency, respectively. So the Patriots made a big splash and received all the attention for reloading their offense with new receivers. But despite the lack of headlines, the Colts adding Gonzalez is just as big of a story.