ORCHARD PARK, N.Y. -- A year ago, Bills quarterback J.P. Losman was at a loss.

He was competing against Kelly Holcomb for the starting job and there were no guarantees. The Bills were coming off a 6-10 season, and the fan base wasn't totally in his corner. Worse, his teammates weren't sure about his presence and leadership ability, particularly after he completed only 49 percent of his passes in 2005.

What a difference a year makes. Bills minicamp opened Monday and Losman looked like a winner. His passes looked crisp and accurate. Receivers ran sharp routes and Losman hit them just as they separated from defenders. On Monday, he was particularly sharp in blitz drills. The ball rarely hit the ground. Receivers caught almost everything. 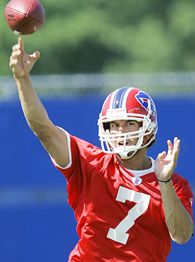 The biggest reason for the comfort zone is continuity. This is only the second time in eight years the Bills' offense returned the same starting quarterback (Losman) and offensive coordinator (Steve Fairchild). Continuous change on offense is one of the reasons the Bills have been out of the playoffs seven consecutive years, tying the franchise's longest streak. Bills fans used to the K-Gun offense under Jim Kelly have seen mostly misfires since his retirement.

But it looks like that is changing. Losman had a breakthrough season in 2006. He completed 62.5 percent of his passes for a team that finished at 7-9. At minicamp, you can see momentum building on offense. The tempo was good. The chemistry was exceptional.

"It's great having a year in the offense with the same coach, the same schemes and the same receivers," Losman said. "I am really confident in our guys. Josh Reed had a really big day today. Lee Evans did well. Our chemistry was good. Now, we are going to try to put together something special."

For those trying to visualize the Bills' offense, you need to look to St. Louis. Fairchild brings the offense Mike Martz made famous with the Rams to Buffalo. Tempo and quickness are the keys to that system. Losman looked terrific Monday as he hit receivers in stride. That wasn't the case a year ago.

Losman needed a lot of work on his fundamentals in 2006. Coaches broke down his steps dropping back from center. Throwing the ball has always been easy for him. Losman has a rocket for an arm. But footwork has always been more of an issue.

"He has kind of settled down and compacted his drop," Fairchild said. "Consequently, he is getting it out with more rhythm and more timing. And he is a lot more accurate."

Those who were regulars at Rams practices in the early 2000s counted the number of practice incompletions in days, not numbers. Kurt Warner wouldn't miss and receivers caught everything. The extra year together has wide receivers Evans, Peerless Price, Reed and Roscoe Parrish zipping into their routes and coming out with the ball. From the look of things, Evans is on the verge of a monster year and should emerge as one of the top AFC receivers.

"I want fans to say that we are exciting to watch," Losman said. "There are an exciting group of guys. They have put the time and effort to get the timing down. We're exciting. We work hard. There is an all-out effort on everything when we go out there."

It's great having a year in the offense with the same coach, the same schemes and the same receivers. I am really confident in our guys. Josh Reed had a really big day today. Lee Evans did well. Our chemistry was good. Now, we are going to try to put together something special.

The interesting change is at running back. The Bills thought they had become too plodding in the backfield with Willis McGahee. The franchise was switching from the Steelers-influenced offensive style of Mike Mularkey to the Fairchild system, which is an up-tempo offense with more finesse. McGahee caught only 18 passes last year, and even though he's a 1,200-yard rusher, the Bills ranked 27th in the league running the ball. Enter first-round pick Marshawn Lynch, who brings more of a Marshall Faulk style to the Bills' backfield.

Lynch looked good catching the ball from the backfield. Though he doesn't have McGahee's power, Lynch can break a quick run up the middle when needed. He'll help with the passing offense first and settle into his running duties with a little more experience. Anthony Thomas may be on the field on early downs, but it's pretty clear Lynch will grow into being the main back. On Monday, though, he was in awe of his new teammates.

"Sometimes I catch myself in a daze watching them," Lynch said. "It's like, 'Man, that's Peerless Price right there. That's Lee Evans.' You can see some great things from this offense."

And the Bills will need to see great things because the defense will have problems. The defense was respectable last season, finishing 18th overall in total defense (329.6 yards per game) and 10th in scoring defense (19.4 points per game). But the defense took some hard hits this offseason. Gone are linebackers Takeo Spikes and London Fletcher and cornerback Nate Clements. That's too much talent to lose not to take a hit on the field. The Bills, who scored just 18.8 points per game last season, might have to score 23 points a game this season just to get back to the seven-win mark.

But so far, that isn't unreasonable. The Bills' offense looks like a winner based on early observations.