BEREA, Ohio -- At a recent minicamp practice just outside of Cleveland, Jamal Lewis took a handoff, made one cut to his left around the guard and rambled 30 yards downfield.

It was like old times with a new twist. Lewis has been running all over the Browns' defense since he entered the NFL in 2000. In 12 games spread over six seasons, Lewis turned the Browns' defense black and blue, gaining 1,524 yards with a staggering average of 5.6 yards per carry. That's almost 20 percent of his 7,801 career rushing yards. Cleveland might rock, but Lewis always has rolled when he sees a Cleveland uniform. 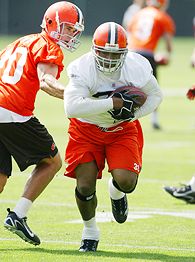 The new twist this season is that he's running for the Browns instead of over them. Though he had been a symbol of Baltimore's power offense, both he and the Ravens were looking for change this offseason.

"It's real odd," Lewis said of his transition. "Sometimes change is good. I needed a fresh start. I needed one last year."

It was hard for both the Ravens and Lewis to part ways. They had a lot of special moments together. Lewis got a Super Bowl ring in Baltimore. In 2003, he rushed for 2,066 yards. Instead of franchising him last offseason, the Ravens worked out a lucrative three-year extenion, which in reality was a one-year deal that paid Lewis $6 million for the 2006 season. Even though he was coming off a disappointing 2005 season in which he rushed for just 906 yards, he was still only 26 years old at the time.

This offseason the Ravens were forced to release Lewis to clear salary cap room. While Lewis and the Ravens kept in touch with the hopes of reuniting, in the end, Lewis signed a one-year, $3.5 million deal with the Browns. If he plays well, Lewis' salary could be boosted to $5 million.

That's a league-wide trend these days. Teams are turning more to two-back rotations and moving away from having one back pound the ball on the ground all game. Spread offenses need halfbacks who have the ability to get into routes and force coverage in the secondary to free up receivers.

That's not Lewis. He's never had a 50-catch season. He's Jerome Bettis with speed. Though coaches still like to wear down defenses occasionally with one big back, the focus now is to confuse and create with different formations. At 27, Lewis is kind of a dinosaur, albeit a well-conditioned, talented dinosaur.

I think if Jamal stays healthy and our offensive line comes along and becomes the offensive line we want it to be, I think he'll have a chance for a rushing title.

"I'm 27 years old but I'm still fresh and still healthy," Lewis said. "I had the ankle problems over the past two years, but I had the surgery. Mentally, I'm good. I just needed to get into the right situation."

Cleveland is a good fit because it is a franchise that needs just about everything. The Browns had the NFL's second-worst running attack last season and averaged just 14.9 points per game. General manager Phil Savage, who was involved in drafting Lewis in Baltimore, believes Lewis is a back who can get them through this season.

"I think if Jamal stays healthy and our offensive line comes along and becomes the offensive line we want it to be, I think he'll have a chance for a rushing title," Browns coach Romeo Crennel said.

Former Browns great Jim Brown watched this week's minicamp and he was impressed with Lewis. "Good speed, knocks people down, he's what you call a horse," Brown told the Cleveland Plain Dealer.

What Lewis likes about the Browns is there is more of a commitment to run than what he saw in Baltimore the last two years. The new offense features more motion. It disguises the run and the pass. He also likes what the team is doing with the offensive line, giving $7 million a year to guard Eric Steinbach and drafting left tackle Joe Thomas in the first round.

The Ravens' offensive line was getting younger, something Lewis didn't like and he struggled last year. While he rushed for 1,122 yards in 2006, Lewis averaged just 3.6 yards per carry.

What he hopes to run away from this season are questions about his diminished speed. He hopes the ankle surgery will bring back his speed.

Lewis normally trains at 255 pounds, but he came to minicamp this year at 248 pounds. On the advice of coaches, Lewis plans to lose 10 more pounds to get to 238 for training camp to give him an extra bounce in his step.

"I don't buy the thought that people say I'm out of gas and I don't have anything in the tank,'" Lewis said.

He'll get a chance to prove that this year for the team he used to fill his tank up against.