He swivels in the power chair, furiously working his iMac mouse and keyboard, wrapped in a cocoon of mahogany and football memorabilia.

Here in the comfort and safety of his stately home office, set in an upscale development outside Indianapolis, Cato June is not merely a linebacker for the Colts. He is the powerful owner, shrewd general manager and X/O-savvy head coach of an NFL fantasy football team called Juneimus D Great -- a name modestly modeled on the emperors of Rome. 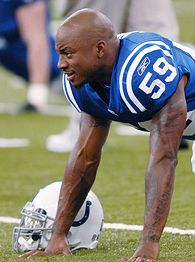 On this late November day, June is not smiling. He bears the stern countenance of someone whose team is scuffling around .500 with the season winding down. At this moment, desperately seeking some receiving help -- Tap! Tap! Tap! Click! -- June is Everyfan.

An estimated 15 million to 20 million Americans play fantasy football. June is proud to be one of them. Admittedly, it makes for some awkward moments. You see, his fantasy quarterback is the Patriots' Tom Brady.

"Playing New England, I can't be happy with him throwing a TD pass, but in the back of my mind, I'm like, 'Yeah, I just got six points in my fantasy league,'" June says, laughing.

In fact, when the Colts played the Patriots on Nov. 5, June's moral compass moved him to sit Brady in his fantasy league. In the real game, however, he was rewarded with two interceptions of the former Super Bowl MVP. June isn't sure which accomplishment was better.

"I picked up [the Jaguars' David] Garrard," June says. "He happened to give me three or four touchdowns that week. I think it was a great GM move by myself."

Fantasy football has exploded into a billion-dollar business. You can find tips everywhere, including the various platforms of the Worldwide Leader in Sports. The premise is simple: Fans build teams by drafting NFL players, who acquire points for recording a variety of statistics. Games are played head to head and, like the NFL, the good teams advance to the playoffs. Depending on the league, the stakes can be quite low -- or dizzyingly high.