PLANO, Texas -- His sinewy hands, once lithe and alive, are gnarled and balled involuntarily into fists.

Ron Springs, once one of the best pure athletes on a series of vintage Dallas Cowboys teams, sits in a wheelchair in an oak-paneled room and wrestles with the challenge that sits in his lap:

A bowl of cherries, delivered by his wife Adriane.

With great concentration -- the muscles of his jaw tighten with the effort -- he forces his fingers to open just enough to scoop a cherry into his hand. Slowly, he lifts the hand to his mouth. Ladles it, really. He closes his eyes, savors the fruit and chews deliberately. He exhales, then spits out the pit. There are about 30 more cherries left in the bowl.

No, Springs' life is not a bowl of cherries, but he will tell you it's better than the alternative. Ravaged by type 2 diabetes at the age of 50 -- he has already lost his right foot and much of his incessant energy -- Springs is waiting for a miracle.

This miracle has a name: Everson Walls. They played together for four seasons with the Cowboys (1981-84) and soon they will be linked by a fist-sized organ. Sometime in March, Walls will give Springs one of his kidneys.

"I don't see him as a hero," Springs said. "Heroes are somebody that just did something to get notoriety. He is not doing it for that. He is a dear friend, and he loves me and believes in me and wants to see me have a better quality of life."

This, in the hurly-burly world of professional football, constitutes an unlikely love story.

"We already know we love each other," Walls said. "I have never told Ron I love him. He has never told me he loved me. He didn't have to."

Springs and Walls never played in a Super Bowl with the Cowboys. But while the NFL celebrates itself next week in Miami, they have experienced the joyous feeling of climbing the mountain. At the end of the 1990 season, Walls played in the ultimate game with the New York Giants. Naturally, Springs and his family were there in Tampa to celebrate the victory with him.

It was a cathartic moment for them both. In January 1981, when the San Francisco 49ers' Dwight Clark soared across the cover of Sports Illustrated to make The Catch, it was an earthbound Walls, beaten, who trailed in his wake. A decade later, though, Walls was featured on another SI cover, this time arms spread and exulting after Scott Norwood's missed field goal gave the Giants a 20-19 victory over the Buffalo Bills.

That 180-degree swing frames the complicated relationship between Springs and Walls. Agony and ecstasy. Yin and yang.

There is an unmistakable, unshakable connection between these two former Cowboys. It can be seen in the rough trade of locker-room sparring. Walls finds it amusing that a part of him will forever be, so to speak, under Springs' skin.

"He hates that," Walls said, laughing. "He is like, 'Of all people, Walls giving me a piece of him.' All the arguments we've been through. We don't think alike. We don't have the same habits.

"He will never live this down."

That, of course, is the whole point.

"That's right," Walls said, growing serious. "I will always be there. Even if I am not around, he will always know that I was the one. Double-edged sword.

"Life," he said, laughing again, "is a double-edged sword."

Said Springs: "It's a big deal. You've got to understand now, this man is giving me something to make my life better. I would tell everybody in America, be a donor. The ultimate donor was Jesus Christ -- he gave his whole life for us.

"This is a big deal, even though we as friends, we don't see it that way." 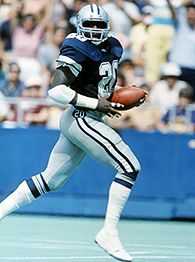 Before Jerry Jones and Bill Parcells and Terrell Owens, there was a single face of the Dallas Cowboys. Head coach Tom Landry was coming off his second Super Bowl victory when the team drafted Springs, a running back from Ohio State, with their third pick in the fifth round of the 1979 draft. Two years later, they signed Walls, a Grambling cornerback who was born in Dallas.

This was a team dominated by veterans -- Tony Dorsett, Randy White, Drew Pearson, Ed "Too Tall" Jones -- but Springs, who grew up around black college football, reached out to Walls.

"He would come up to the practice field and just jog," Springs remembered. "He wouldn't lift weights, he wouldn't run, he wouldn't do anything. So I was skeptical. I made him feel at home. He would come over and have dinner and we would talk."

They would debate the merits of "The" Ohio State University versus tiny Grambling, Woody Hayes versus Eddie Robinson, offense versus defense. They became friends, and their families would grow close, too. Even after they left the Cowboys -- Springs joined the Tampa Bay Buccaneers in 1985 and Walls became a Giant in 1990 -- they took vacations together. Each is a godfather to one of the other's children.

Springs played eight NFL seasons, and they were marked by his versatility; he ran 694 times for 2,519 yards, caught 249 passes for 2,259 yards and scored a total of 38 touchdowns. Walls, meanwhile, made the Pro Bowl as a rookie in 1981 and in four of his first five seasons with the Cowboys. In 13 seasons, he intercepted 57 passes, 10th on the all-time list when he retired after the 1993 season.

Retired in Cleveland, Springs nevertheless stayed active. He played softball and basketball four or five days a week, but one day he found himself abnormally thirsty. A doctor told him that, at the age of 34, he was a borderline diabetic.

In January 2004, a staph infection, which sent a fever raging through his body, left him with a difficult choice.

"I could risk this infection moving around from my foot, to my heart valves, my shoulder, or take my foot off, do the antibiotics and it would heal faster," Springs said. "I decided they could have my foot, because where I'm going, I don't need a foot."

For an athlete who lived on and by his feet, it was a crushing decision. Doctors took his right foot just above the ankle, along with three toes on his left foot. It was, Walls said, the only time Springs was really, truly down.

"He was depressed and upset," Walls said, "and that's just something that really no one could help him with."

"It's tough to see my boy like that," said Hall of Fame running back Tony Dorsett, perhaps Springs' closest friend. "Wow, man, I've cried on several occasions for Ron. I know it's got to be tough for him not to be able to do [things] for himself anymore. When you've conquered the world, so to speak, and you can't do anything for yourself. I don't like seeing him like that, I really don't."

With his kidneys failing (they are about 30 percent functional), Springs turned to dialysis to keep his body free of toxins. Every Monday, Wednesday and Friday morning, before the day dawns, he makes the short drive to Collin County Dialysis Center. For more than four hours, Springs sees his life pass before him in those plastic tubes.

It is an exhausting process, and sometimes he takes a nap when he gets home. Last year, Walls took him to several of those sessions. It was, he said, a sobering experience.

"I saw the people that were in there," Walls said. "One guy was there for one month, and the guy is coming in there and he's somewhat ailing but he's doing OK and, all of a sudden, he's not there anymore.

"You just don't want that type of situation to happen to your friend."

When Springs was placed on the national transplant waiting list, he was told it might take four years to get a kidney. The alternative? Produce a viable kidney from family or friends.

Springs' son Shawn, a cornerback for the Washington Redskins, volunteered. But given the physical dangers of the NFL, Ron didn't want him to jeopardize his own health.

"He doesn't accept my sickness the way my daughters do," Ron said. "It bothers him too much to come around a lot. Seeing your father not as strong as he was -- growing up, we competed at everything, running, jumping, basketball, football -- it bothers him."

A niece proved to be a match, but she got pregnant. A nephew matched too, but doctors said he wasn't strong enough to live with one kidney. Springs and Walls were working out one day at the gym and, almost offhandedly, Walls said he'd do it.

"We had the same blood type and I knew what was doable and what wasn't doable," Walls said. "I said, 'OK, I'll get myself checked out.' It was dire straits, and all of a sudden I go from a last option to the first option."

Said Springs: "I never put pressure on him to do it. I never asked him anything. The only time I ever questioned him was when he was going to do the psychology test. I said he might be crazy, so I told him about reading everything on the test, because if you don't answer the things correctly they're not going to accept you."

In December, after a series of tests, it was determined that Walls and Springs were a match. Neither one was terribly surprised. Relieved was more like it. The transplant is scheduled for March and, if things go well, the quality of Springs' life will improve dramatically.

"When you get a new kidney, it is just like getting a new battery in life," Springs said. "You are back strong again. You are energetic. I am ready to start lifting weights and swimming and doing what I'm used to doing."

"This is like a life-and-death situation, because we all know that eventually if Ron does not get a kidney, what the ultimate outcome could possibly be," Dorsett said. "You are giving a part of yourself up to help somebody else, to help someone live a more productive life. That's pretty heroic."

He's planning a long-overdue vacation, maybe a cruise to Greece, remaking his wedding vows and working to increase awareness of diabetes and kidney disease. Publicly, anyway, Walls is more cautious about the future.

"People think this is a so-called feel-good story or whatever," Walls said. "That's all great, but this doesn't mean that Ron is in the clear, everything is going to be fine. This is still going to be a major challenge for him.

"I don't want the public to all of a sudden stop thinking about Ron Springs and his plight. They are going to have to keep him in their prayers way after the kidney has been donated."

Walls, stoic, almost dour through this turn in the conversation, pauses and smiles. A little too heavy there, perhaps.

"He loves the attention he's getting now," Springs needles later. "He's considered the savior, the black knight. He's eating it up."

There was, Springs said, a growing concern in the back of his mind after the match was confirmed.

"I felt elated," Springs said, smiling. "And then I started thinking about his habits of eating chips and dip. He loves margaritas, and I don't drink.

"If I have to resort to that to get a kidney, I guess I'll eat chips and dip."