The second-quarter pass was supposed to hit Texans wide receiver Andre Johnson on the back shoulder. Instead, Matt Schaub's underthrown ball fell right into the hands of Panthers cornerback Ken Lucas.

The apparent interception cost Houston a 14-all tie on Sunday at Carolina and sent Schaub, deeply contrite, directly to the sideline.

After Houston challenged the interception and as the instant-replay process progressed, Schaub told the Texans' defenders it was his mistake but, going forward, if they had his back, he had theirs. The play was overturned and Schaub's subsequent 9-yard touchdown to Johnson tied the score.

In only the fourth start of his four-year career, Schaub led the Texans to 34 unanswered points and, for the first time in the franchise's six seasons, a 2-0 record. 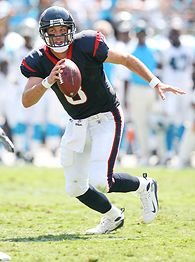 "That's accountability," Texans general manager Rick Smith said Monday. "The team never panicked because he never panicked. He's got that thing that good quarterbacks have, a presence, a confidence, poise.

"And what's happened is his accountability has spread throughout the team. The guys are now accountable to each other. It's a different feeling because they believe in him."

Although the Patriots have been energized by the offseason acquisition of Randy Moss and Adalius Thomas, it can be argued amid the early returns that no one has had an impact on a team quite like Schaub. The Patriots, after all, have won three Super Bowls in six seasons. The Texans have won 26 games.

In surprising wins over Kansas City and Carolina, Schaub completed 36 of 50 passes for 452 yards, three touchdowns and one interception. His completion percentage (72.0) is the league's third best and his passer rating (111.4) is sixth.

But it is Schaub's presence in the huddle and the locker room, not his statistics, that has changed the chemistry in Houston.

"The way we came from behind to win this game after the way we beat Kansas City shows things have changed around here," Johnson told reporters after the 34-21 victory at Carolina. "There's a different attitude in here."

To a man, the Texans credit Schaub with that transformation.

In 2002, the Texans made Fresno State quarterback David Carr the first overall choice in the NFL draft and the face of the franchise. He struggled over five seasons to carry his team over the threshold, and it was strangely symbolic that Carr, standing on the Panthers' sideline, witnessed Schaub's breakout game.

To their credit, no one in the Texans organization will criticize Carr publicly, but parse their words and you will discover, by inference, that the very things they praise in Schaub were lacking in Carr.

The unlikely story of Schaub's success in Houston begins in 2006, when owner Bob McNair sacked two NFL career veterans, Dom Capers and Charley Casserly, and replaced them with two management neophytes, Kubiak and Smith, who learned their craft together with the Denver Broncos.

After the 6-10 shakedown season, Smith and Kubiak came to the conclusion that their first priority was upgrading at quarterback. They mulled the conventional options of signing a veteran free agent or drafting a quarterback. Figuring that Notre Dame's Brady Quinn would be gone when they drafted No. 8 -- he ended up going to Cleveland with the 22nd pick -- the Texans went to Plan C.

Smith, at 37 still the league's youngest GM, called the Falcons and found out Schaub, who was likely to become a vigorously pursued free agent after the 2007 season, was available. Kubiak spoke with his college coach, Virginia's Al Groh, and Falcons assistants Bill Musgrave and Alex Gibbs. They loved him, and after a round of golf in Newport Beach, Calif., Kubiak understood why.

Schaub, a 7-handicap, was cracking on Kubiak's ungainly golf game by the third tee. It was love at first slight. After the round, independently, Kubiak called Smith and Schaub called his agent, Joby Branion. Their message: Do the deal.

A day later, March 22, the Falcons traded Schaub for two second-round draft choices and swapped first-round picks. Despite an incomplete résumé behind Michael Vick of two starts and six career touchdown passes, Schaub got a six-year contract worth $48 million.

Beyond Schaub, the Texans' unprecedented start owes to many happy convergences. Defensive end Mario Williams, taken first in the 2006 draft ahead of Reggie Bush and Vince Young, had two sacks and a 38-yard interception return for a touchdown against the Chiefs. Rookie defensive tackle Amobi Okoye had two sacks at Carolina.

Johnson, who will miss Sunday big game against the Colts (2-0) because of a knee sprain, has Moss-like numbers at wide receiver: 14 catches, 262 yards and three touchdowns. Running backs Ahman Green and Ron Dayne have averaged 110 yards combined per game. In a conscious effort, the Texans signed 10 free agents in the offseason with more than 40 games of playoff experience.

When the Texans beat the in-state rival Cowboys five years ago in their NFL debut, great hopes were raised. This season's opener at Reliant Stadium against the Chiefs featured acres of empty seats at kickoff. Losing has bred contempt, and fans are still angry the team passed on the Longhorns' Young in the 2006 draft.

Houston is wired for Sunday's game against Indianapolis.

"This is the first week," said Houston Chronicle columnist Richard Justice, only slightly exaggerating, "Houston has ever had an NFL team."

In Carr's rookie season, 2002, he was sacked 76 times, an NFL record for futility. When a national television crew visited to chronicle that dubious achievement, Carr politely answered questions and had the grace to smile.

Carr was sacked an astounding 249 times in 75 career starts in Houston and fumbled 68 times, losing 21 of them. He was not particularly agile, and his decision-making process sometimes required more time than was advisable.

Schaub, on the other hand, moves well for someone who stands 6-foot-5 and weighs 237 pounds.

"He just knows where the football's supposed to go," Smith explained. "He goes through his progressions quickly, he has a good pocket presence -- he feels the pressure well -- and he gets rid of the darn ball."

Translation: This wasn't always the case with Carr.

Last year, through Kubiak's insistence, the Texans allowed only 43 sacks, down 25 from the previous year. This year's goal is 30. So far, there's been an average of only one per game.

After taking two sacks in the opener against Kansas City, Kubiak chided Schaub in his postgame interview, saying, "He missed a couple of blitzes where he's got to get rid of the football."

Against the Panthers, one of the league's most quarterback-unfriendly teams, there were zero sacks. This is remarkable, because the three interior offensive linemen -- left guard Chester Pitts, center Steve McKinney and right guard Fred Weary -- were starting in 2002 when Carr was thrashed in record fashion.

While Carr reportedly was an indifferent teammate, Schaub lives only a few minutes from the Texans' facility and is usually among the first to arrive and the last to leave.

He is very aware of his place in the game and the quarterback food chain. Schaub knows that the four quarterbacks taken ahead of him in 2004 were all starting last year: The Giants' Eli Manning (No. 1 overall), San Diego's Philip Rivers (4), Pittsburgh's Ben Roethlisberger (11) and Buffalo's J.P. Losman (22). Schaub, taken in the third round with the 90th pick, is finally getting his opportunity.

The Texans' Sept. 30 game at Atlanta will give Falcons fans a painfully close look at the quarterback they might have had post-Vick.

Smith knows a little something about championship quarterbacks. He was a Broncos assistant coach when John Elway led Denver to back-to-back Super Bowl victories.

"The belief that his teammates had in him, the way he carried himself, was really something," Smith said. "To say that Matt Schaub is going to be the next John Elway -- no, I'm not saying that at all. What I'm saying is that Matt's got a lot of the qualities that the good ones have."

And that's saying something.