You could've missed it entirely. You had to go to Page 6 of the growing list of items on eBay to find it, past the scads of Pat Tillman cards for sale, and the autographed mini-footballs, and the jerseys, and the "American Hero" T-shirts. You had to go past the Tillman Arizona Cardinals uniform top that was already up to $305, and the Tillman-signed ball that was at $128.40 and ascending. 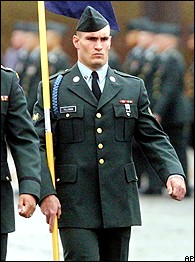 In other words, you had to get past the commerce of the dead to reach a word to the living.

It was back there on Page 6, at the bottom of the 271 listed items that a routine "Pat Tillman" search returned at the auction site at midday Monday. The item description said, "Pat Tillman: Wake Up & Think About It."

Upon opening the file, you were greeted with something extraordinary: An open call for people to stop bidding on Tillman items. A plea for people to turn away -- nay, to run away at top speed -- from the ghoulish business of those wishing to turn a profit from Tillman's death last week in Afghanistan.

"Many sellers are currently featuring Pat Tillman memorabilia to cash in on the death of an American hero," the "seller" wrote. "Think about it."

The writer then asked readers instead to pony up their bids for a fund that would be donated to the charity of the "winning" bidder's choice -- essentially, eBay regulars are asked to fork over their money for something they couldn't actually put their hands on and own.

Perhaps that's why the item is at the bottom of a pile 271 deep.

Understand first that Pat Tillman items were on sale at eBay long before he was killed in action on patrol with an Army Rangers unit. Understand that just about every athlete of any note has memorabilia related to him or her available for auction, be it on eBay or elsewhere.

Understand that eBay is a commercial vehicle of human need, a conduit between people who have something of value to offer and those who cannot, for one reason or another, refuse the offer.

This is America. The profit motive doesn't cease to exist in either good times or bad. All those American flags that suddenly appeared in doorways and windows and on poles and car antennas after the events of Sept. 11, 2001 -- they didn't materialize simply out of the collective spirit of the country. Rather they were manufactured and sold, and the companies involved made a tidy profit. Entrepreneurs don't shutter their factories every time the U.S. plunges into crisis mode.

Still, there was something unnerving about the flood of Tillman items that blew into eBay in the hours and days following his death.

Some sellers sounded as though they were profoundly moved by the tragedy, including one who described himself as a retired military man and said he would donate half the profit from the Tillman item he was hawking to any Tillman-related fund he could find. Others were as cool and businesslike as possible, simply describing the value of the Tillman autograph or the quality of his NFL rookie card.

It was only the message at the bottom of Page 6 that pierced all the way through.

"This auction is to honor Pat Tillman," the item's "description" read. "Please do not bid on items featuring his name ...

"The winner of this auction must specify to which charity he or she would like the final bid amount to go to. We'll consume the listing fees. At the end of this auction, you will be responsible for sending us a check or money order payable to the charity of your choice. We will then forward the funds on to the charitable organization.

"When we get a receipt from the charity, we will send it to you. Or you could simply make a donation in Pat's name to the charity of your choice and skip this auction altogether."

It was a clean wish, one that didn't try to twist itself into some vague extrapolation of what Tillman "would have wanted." It was the message that needed to be heard, one telling bidders that whatever they thought they might be accomplishing by purchasing Tillman memorabilia in the days after his death, they were simultaneously lining the pockets of someone brazen enough to want to capitalize on it.

"Thank you for coming to your senses and doing the right thing," item No. 271 concluded.

If only people would.

The leading bid as of Monday afternoon: Eleven cents.