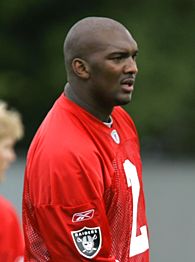 All of which leads to the wild notion that Russell might play quarterback for Team Eyepatch sometime this season. And -- naturally -- to the question of who, at that point, might have a damn left to give about seeing how it goes.

In the meantime: Josh McCown, everybody! Enjoy.

How long has it been since a No. 1 overall pick spent this much time on the sideline just trying to reach an agreement? You have to go back more than 20 years, to Bo Jackson, a brilliant multi-sport athlete, who, in the end, didn't even sign with Tampa Bay. Bo was holding out for a reason: He didn't want to go.

It's hard to believe Russell feels that way, since: (a) He isn't about to get drafted by the Kansas City Royals (Jackson made his Major League debut with the Royals on Sept. 2, 1986, at which time the Buccaneers must have concluded he wasn't going to sign with them); and (b) He got drafted by a team that, no matter how screwed up it can appear occassionally, genuinely wants to let Russell come forth and shine. He's that needed.

It was so set for Russell with the Raiders, just so completely set. Oakland had passed on its chance to draft Matt Leinart the year before, then discovered it had a need at quarterback that suddenly couldn't be ignored a moment longer. Enter JaMarcus, whose big body type and cannon arm reminded owner Al Davis of so many of the QBs he has loved before. If the Raiders hadn't come to be so constantly associated with turmoil and doing things the hard way, you would have marveled at the almost-perfect match.

But the Raiders, over the past few ... well, decades ... have come to be understood as the size XXL speed bump in the vast parking lot that is the NFL. And without really hashing out who's right and wrong in this thing -- at $30 million-plus guaranteed, wouldn't that be an embarrassing waste of emotion? -- it's safe to say dealing with Davis Inc. was never, ever going to be easy.

Out here in California, we generally blame the Raiders for everything. It's faster that way. But the larger picture is that the NFL season begins this weekend without the top pick in the draft. And no matter how you parse that sentence, the smell is the same.

You hear it said that sports fans have short memories, which makes it possible for them to watch games and still enjoy them -- that a short-term memory is almost inherently critical in that process, because there's so much you would like to forget. Rick Ankiel won't get booed by the St. Louis fans any time soon, put it that way.

But I find the opposite to be true. Sports fans have the longest memories, which is what makes them so fun to be around. They remember stats, but also slights. They compile grievances. They remember wins, but also losses, both excruciating and routine. The recall is staggering.

A few years from now, it may well be nothing more than a footnote that JaMarcus Russell and the Raiders, either separately or together, disgraced the sport by failing to even come close to a contract agreement as training camp steamed along. It may be a distant thought that Oakland had to bring in Daunte Culpepper for insurance, just as it won't be mentioned that one of the reasons the Raiders now might be willing to strike a deal is that they can save $2.5 million by cutting Culpepper before the first game.

After all, someday, JaMarcus Russell will be the Raiders' starting quarterback. It just won't be any time soon, a fact that Russell and the Raiders virtually have guaranteed by taking this long simply to agree to dance around the ballroom. For both parties' sakes, they ought to hope that I'm wrong about the elephantine memories of the fans.

Sure, it's just another day in Raiderville -- but don't think for a minute that those Silver and Black fans don't realize they deserve better. They can remember when they had better. And that's the thing.

Mark Kreidler's book "Four Days to Glory: Wrestling With the Soul of the American Heartland", published by HarperCollins, is in its third printing. His book "The Kids of Summer," about the curious ability of one town to consistently produce Little League champions, will be released in July 2008. A regular contributor to ESPN.com, he can be reached at mark@markkreidler.com.