NFL spy stories once had spice and suspense, besides all of the friction they created between the innocent accused and outraged accuser. Those were days when undercover agents were clever, stealthy and in some cases imaginary, which was all the better because they spooked the other side anyway.

This latest flap in which the New England Patriots spied on the New York Jets in their opener Sunday fell far shy of a classic case of NFL espionage. A guy caught videotaping defensive signals by Jets coaches mostly revealed a lack of imagination and stealth. Especially since Green Bay officials claimed he did the same thing to the Packers in November. 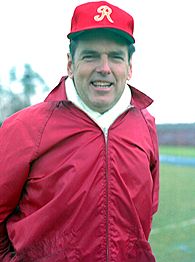 This is not the way it should be, because it never was in the distant past. People used to throw tantrums in concert with screams that they had been wronged by spying rivals who were immune from fair play and good manners.

This pretty much was how the Cowboys described boogeyman George Allen, although it wasn't all they said about him. Allen and the Cowboys historically are entwined by a Dallas-Washington rivalry, but in truth they fell out even before he coached the Redskins.

Allen was coaching the Los Angeles Rams in 1967 when the first dustup occurred. Cowboy exec Tex Schramm said a suspicious vehicle had been parked near the team's practice field. Alert and inquisitive, he alleged a license plate check traced the car rental to Johnny Sanders, head scout of the Rams.

Schramm drew himself up in righteous anger and filed an official complaint with NFL commissioner Pete Rozelle. Other than to chuckle privately, Rozelle never reacted to Schramm's plea for punitive action.

The incident didn't end there. Allen responded with a hilarious countercharge.

Allen claimed that the Rams discovered a man sitting in a eucalyptus tree with binoculars, spying on their practice. A futile chase of the culprit ensued. Allen said the man looked like Cowboys scout Frank (Bucko) Kilroy.

This was a comical comeback. Kilroy weighed in the vicinity of 300 pounds and did well to climb out of shoes much less up a tree. Allen not only had the better comeback, but the Rams went to Dallas and whipped the Cowboys 35-13.

Hence when Allen transferred to Washington, the Cowboys already thought him devious and all-round no good. In other words, they were paranoid of the thumb-licker and what he might do next that was illegal, immoral or both.

Washington Week in Dallas became a lockdown from every angle. For example, the top floors of a motel located behind the north end zone overlooked the Dallas practice field during the early 1970s. To prevent an Allen confederate from peeping, the Cowboys rented every room with a view and kept them vacant for a week in advance of Allen's coming to town.

That still didn't stop the Cowboys from wondering how Allen would circumvent their security.

"Any helicopter that came over, the coaches would look up like, damn, that's George Allen up there with a notebook,'' recalled Cowboys running back Walt Garrison.

"He [Allen] was basically a crook  the Richard Nixon of football,'' said Cowboys defensive back Mel Renfro.

All coaches are spy-conscious. When he coached the Philadelphia Eagles, Dick Vermeil was terminally sensitive to being watched by aliens. He closed practice and chained the gates at Veterans Stadium to withstand access by outsiders. But that didn't prevent him from distrusting the overhead Goodyear blimp that was making a pregame rehearsal. He once was further agitated by an old man wearing a green Eagles warmup in the stands before a game against the Cowboys.

"How do I know Tom Landry hasn't sent someone here to spy on me?'' he told reporters. "Look at that guy up there in the stands. I don't know who the hell he is or how he got in here. But he's sitting up there in a green Eagles warmup. He could be a spy.''

Before there was a George Allen, there was Al Davis, reputed master of the dark art in Oakland. Every rival believed Davis was up to something sinister. Harland Svare, head coach of the San Diego Chargers, even felt his locker room at the Oakland Coliseum had been bugged. He wound up shouting at a light fixture on the ceiling.

"Damn you, Al Davis! Damn you! I know you are up there,'' Svare swore.

"The thing wasn't in the light fixture,'' he purred. "I'll tell you that much.''

Schramm once forwarded a rare instance of spying by a fan. It involved playing football within the cramped dimensions of designed-for-baseball Wrigley Field in Chicago.

"It was the regular practice of vendors to walk in front of the head coach, selling hot dogs and coffee,'' Schramm remembered. "Fans were also so close that they were always leaning over to hear a coach's instructions to a player.

"Once, Hamp Pool, the Los Angeles Rams' coach, was talking to Norm Van Brocklin and a fan beside him was hanging on every word. When Pool finished giving Van Brocklin the play, the fan said, 'Hell, that won't work.'"

Frank Luksa is a freelance writer based in Plano, Texas. He was a longtime sports columnist for The Dallas Times Herald and Dallas Morning News.