INDIANAPOLIS -- It would be heresy piled atop hyperbole to begin suggesting that the latest edition of the Indianapolis Colts defense should be mentioned in the same breath as the Pittsburgh Steelers of the '70s, the Chicago Bears of the '80s, the Baltimore Ravens of three years ago, or the current Tampa Bay Buccaneers.

Indianapolis may, however, have added a new term to the football lexicon here on Sunday afternoon. 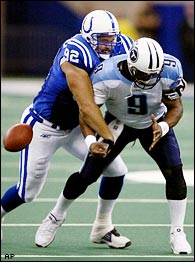 In the Land of Hoosiers and hoops, the two syllables de- and -fense might as well be uttered in some foreign tongue until sneakers start squeaking against hardwood. Defense, however, set the tone in a contest where the Colts needed to make a statement about their ability to compete with a divisional rival. And defense stoked a raucous (but non-sellout) crowd and turned the RCA Dome into a hall of horrors for the visitors in a dominating 33-7 victory over the Tennessee Titans.

Chew on this one, if you will, even for just a moment: Indianapolis is 2-0 and quarterback Peyton Manning, the man to whom everyone here looks for big plays, has thrown just one touchdown pass. The Colts are undefeated despite only two offensive touchdowns in two outings. Noted for its powerhouse offense, Indianapolis didn't go over 300 yards in either of its first two games, and it seems no big deal.

It matters little because the Colts -- the bedraggled bunch that finished the 2002 season with an ignominious 41-0 playoff loss to the Jets -- are playing superb defense.

Who'da thunk it? Well, at least a few Indianapolis defenders, who insisted Sunday evening that they figured things would be considerably better in the second season under head coach Tony Dungy and coordinator Ron Meeks.

For the Colts, it seems, familiarity has bred contempt for opposition offenses.

This has been, since Manning's arrival in 1998, a franchise that characteristically treated the very concept of defense as if it were merely a diversion, something that took place while the star quarterback was icing his arm. Victories at Cleveland in the season opener, and then the rout of the Titans here Sunday, have certainly altered that mindset.

"Hey, we're upset now if somebody even makes a first down on us," said defensive end Dwight Freeney, the second-year veteran who had 13 sacks as a rookie, and notched one of the Colts' five sacks against the Titans. "That touchdown they scored today? I'm still a little (hacked) off they got into the end zone. I know the people around here aren't used to hearing (defensive players) talk that way. But the way we're playing right now, we just feel we can shut teams down, and that's exactly what we're doing."

Indeed, in two games, the Indianapolis defense has permitted just one touchdown and 13 total points -- the fewest surrendered by the franchise in the first two games of a season since the 1960 Colts allowed just seven. Not since 1996 have the Colts christened a season by permitting fewer than 20 points combined in the first two contests.

It is a radical departure for a Colts team that permitted 20 or fewer points in just 26 of the first 80 games in which Manning played. In the past five seasons, Indianapolis allowed an average of 23.8 points per game -- a lot for any offense to overcome on a weekly basis. It's still very early in the season but maybe this is finally the year in which Manning, wide receiver Marvin Harrison and running back Edgerrin James don't have to do all the heavy lifting.

"They just seemed to play with a lot more energy and confidence," acknowledged Titans tailback Eddie George, who rushed for 41 yards in the first half but then registered just five yards in the final two quarters. "They were flying all over the place. And then they got a decent-sized lead, they really turned it loose."

That isn't surprising since Dungy's career mark is now 53-14 when his team scores at least 17 points, and a remarkable 46-5 when his club has led by 10 points at any point. A workable margin usually means that Dungy's smaller-but-quicker defenders can take more chances and force turnovers. The 75-yard interception return for a touchdown by Indianapolis cornerback Nick Harper in the closing minutes on Sunday was the 61st defensive score by a Dungy-coached unit.

In limiting the increasingly diverse Tennessee offense to 14 first downs and 236 yards, the Colts defense out-quicked its opponent by a considerable margin. Dungy has now assembled a unit that doesn't possess many thoroughbreds -- many observers felt that weakside linebacker Mike Peterson, who defected to Jacksonville as an unrestricted free agent, was the defense's best player -- but has plenty of quarterhorses who run to the ball.

"We want to use our speed on the (artificial) turf," said Dungy, who notched his first victory over Tennessee as a head coach, following four defeats. "We just feel like we are quicker than most teams here. We feel our speed is a big weapon."

It was murderous to the Titans, who averaged just 4.1 yards per snap, and who mounted just one possession on which they managed more than three first downs. Of its paltry 236 yards, Tennessee registered 90 yards during "garbage time" in the fourth quarter, long after the outcome had been decided.